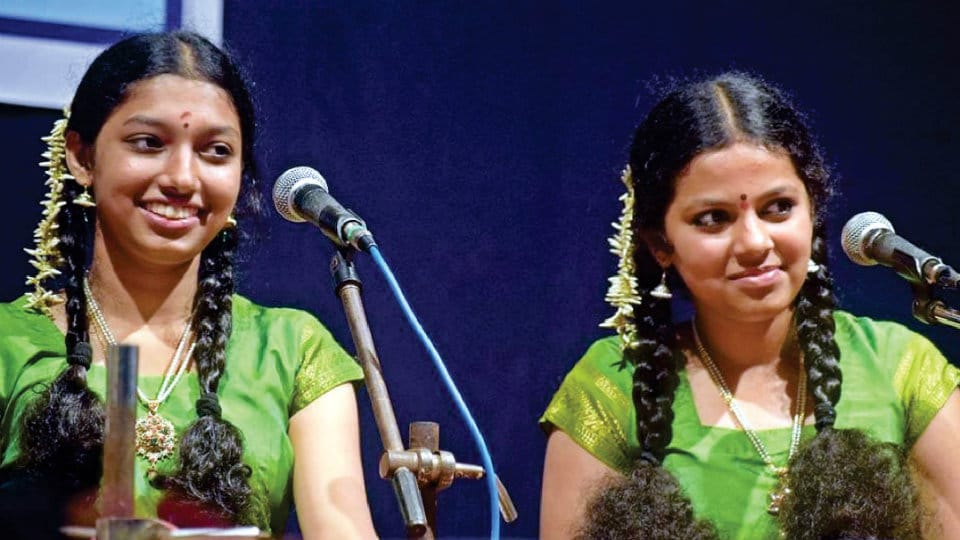 Popularly called as the Lathangi Sisters, the two have been recognised for their immense talent and have received various scholarships both from the Government and prestigious platforms.

The numerous prizes won by them for both solo and duet performances in highly reputed competitions across India stand as a testament to their music prowess and an unflinching dedication to the art. Among many awards, the duo secured the ‘Yuva Sangeet Samraat Junior’ award for their duet singing, which was organised by Sri Sankara TV channel and Carnatic Premier League. Also, they were conferred the title ‘Udupi Sodariyaru’ by Paryaya Pejavara Sri Vishwesha Theertha Swamiji at Shreekrishna Mutt, Udupi.

They have been a part of innumerable workshops conducted by stalwarts like Vittal Ramamurthy, Vid. Suguna Purushotham, GJR Krishnan, T.M. Krishna and Vidu. Bombay Jayashree to name a few.

Having made their debut at Raga Dhana, Udupi in 2014, they have performed at various events and prestigious Sabhas all over the country.

In addition to a music album released by R.K. Srikantan, Archana and Samanvi have published a book ‘Keerthanas of Karnataka’ along with Prof. V. Aravinda Hebbar and Dr. B. Surendra Rao.

On Saturday, they are being accompanied by Vid. M. Keshava on violin, Vid. Akshay Anand on mridanga and Vid. Sharath Kaushik on ghata.

A talk by on ‘Healthy Living Through Ayurveda and Yoga’ by Dr. N.V. Krishnamurthy, Director, Prajna Kuteera, will take place from 4.30 pm to 5.15 pm at the same venue.