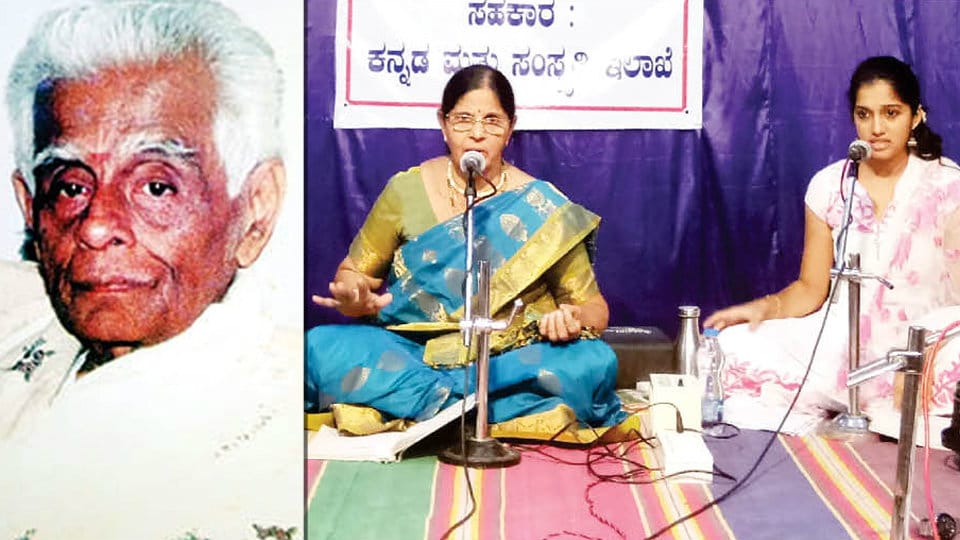 Mysuru city which is blessed with doyens of Karnatak music and supported by the royal court in yesteryears was treated with recall of that flavour on July 8 by a special concert at Veene Seshanna Bhavan, Ganabharathi.

Thus, the programme was sponsored by the family to keep up the legacy of Vid. Sastry, who has composed more than 25 keerthanas in devotion to Sri Ramana Maharshi, whom he addressed as ‘Gurudev’ and popularised singing of Vachana and Dasa Sahithya in regular concerts.

The programme commenced with a Guruvandana shloka seeking ‘chaitanya’ from the Lord followed by varna, valachi, in raga malika set to aadi taala.

This set the pace of concert to follow in clear and systematic sahitya with grace and without a rush. With a brief alapana in hamsadwani, ‘Bajare Sri Vathapi Ganapathim’ followed. Nuances of the raga were shown while ending the kriti with a short neraval in ‘Palaksha Sri Ramana.’ Next to follow was raga ranjani with short alapana followed by clear sahitya rendering in ‘Padma raga Mani Bhushani’.

These kritis highlighted the focus Vid. C.N. Sastry was insisting on with pronunciation of sahitya clearly, yet maintaining the manodharma of the artiste.  These were again the specialty of his school. Saptha swara bedha that Vid. Sastry insisted on perfecting  by students was also clearly shown by Vid. Shyamalasundari Bhat. The concert, though not in classical structured fashion with RTP as high point, had detailed rendering of kriti in Charukeshi  with ‘Bhajare Sri Guru  Ramanam,’ set  to adi tala.

Pure rendering of  alapana by artiste was ably supported by violinist Vid. Arjun who covered details of Charukeshi.  Singing of pallavi and anupallavi in medium pace and repeating each sangathi, brought out  the devotion to the deity. Particularly, details of ‘Sri Arunachala Giri Sannidi Varadam’ in anupallavi was full of bhakti bhava. Again by choosing ‘Ahamaha mithi guru’ of charana  for neraval with emphasis on daivata  and nishda, showed both training in classical mode and awareness of  blending with  sahitya flawlessly. These aspects were what the artiste learnt from Vid. Sastry’s School, a classical touch of the Guru who himself had spent nearly eight years with Gana Visharada B. Devendrappa at Mysore. The kirtanas that followed were of other vaggekaras with ‘Needu charanamule’ in kalyani by Thyagaraga, ‘Sri Chamundeshwari’ in bilahari by Vasudevacharya. These were only good to add to the numbers and paying obeisance to Goddess Chamundi in Mysore.

In classical music concerts, Vid. C.N. Sastry was the proponent of using simple yet deep and sincere appeal to the Lord by using Vachana, Haridasa sahitya from as early as 1936. This very significant step, however, went unnoticed by connoisseurs.

It is, however, continued to be taught by his students and Vidu. Shyamasundari reserved the later half of her concert for the Basavanna, Akkamahadevi Vachana and C.N. Sastry compositions. Her rendering of ‘Bhajare Guru Daivam’ in sindu bhairavi, a composition of her Guru, was elegantly followed by Sri Purandara Dasa composition ‘ninna aashrayisuve’ in raag shahana.

Hindustani music had an influence in compositions of Vid. Sastry and this could not be missed. His experimenting attitude also evoked compositions with mixed ragas and creation of new ragas.

Vid. Shyamasundari Bhat brought out this aspect of her Guru in singing bahudari, bhimplas, behag, desh and suruti in pleading the Lord for blessings as in Vachana and short kriti of Vid. C.N. Sastry.

The family members and students and the audience felt the blessings and were delighted as it was the annual concert held in Mysuru this year – 2017.