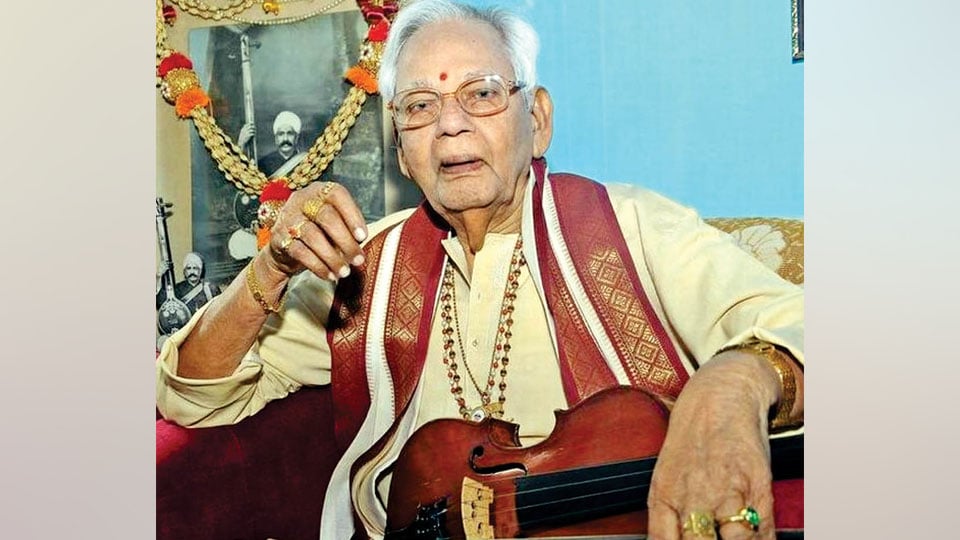 On Jan. 19 (Saturday), Nadabrahma is celebrating Piteelu Mysore T. Chowdaiah Samsmarana Day in a unique way. It is the 52nd death anniversary of the legend. At 5.30 pm, a bust of Chowdaiah Sculpted by Kanaka Murthy is being unveiled by Dr. T.V. Venkatachala Shastry. Then the sculptor Kanaka Murthy and Dr. Annavarapu Ramaswamy will be honoured.

He invented new Ragas and Talams such as Vandana Ragam, Sri Durga Ragam and Tinetradi Tala and Vedadi Tala. For the past 7 to 8 decades, he has been doing service to society, teaching students free of cost. He has given lectures on music in USA, Canada, European countries (UK, France etc.) and Asian countries (Muscat, Bahrain, Dubai, Singapore, Malaysia, Doha and Sri Lanka).

Dr. Annavarapu Ramaswamy or Annavarapu, started learning music from a very young age under musicians such as late Maganti Jagannadham Chowdary (a native of the same village, Somavarappadu, near Eluru) and later from ‘Gayaka Sarvabhowma’ late Parupalli Ramakrishnayya Pantulu of Vijayawada. His father was a Nadaswara Vidwan and brother  a ghata artiste at All India Radio. The rigorous music training in the Gurukula Sampradaya helped him to become one of the most sought after violinists in India. He has received National & State Sangeetha Academy Award along with many other prestigious awards, both National and International.