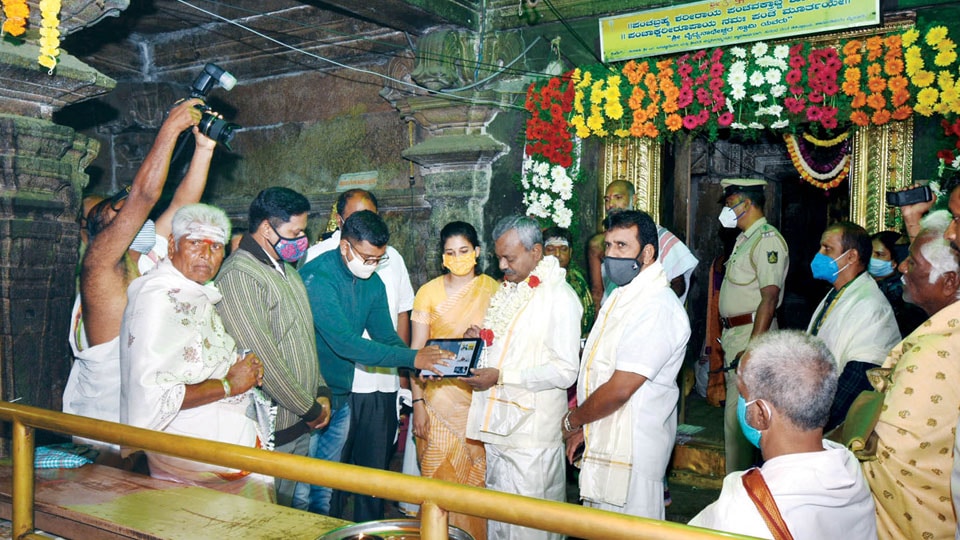 Last time the event was held in 2013, the next Panchalinga Darshana will take place in 2033 when five Shravana Saturdays and five Karthika Mondays fall in a year.

Mysore/Mysuru: The special Panchalinga Darshana at Talakad in T. Narasipur taluk of Mysuru district got off to a virtual start early this morning with the performance of Mahapuja, Mahabhisheka and other rituals associated with ten-day Panchalinga Darshana Mahotsava, in the presence of District Minister S.T. Somashekar and a host of officials.

Although the ten-day Pancha-

linga Darshana Mahotsava began officially on Dec.10 for facilitating pre-Panchlinga Darshana rituals, the event got off to a formal start today on the fifth Karthika Monday, which also happens to be Amavasya (New Moon). The darshana will   conclude on Dec.19.

After the completion of all the rituals and customary pujas, the temples were opened for devotees (only locals) after 7.30 am and closed at 3pm.

As the darshana is restricted only for locals in the wake of pandemic, the devotees in all other places can watch the event live by logging on to the link https://www.youtube.com/c/Mysuruvartheilaake

In the wake of the COVID-19 crisis, the State COVID-19 Technical Advisory Committee (TAC) had recommended the Government that this religious festival be conducted in a simple way observing all the traditional and ritual ceremonies. The TAC had also suggested that the event be confined to the people of the taluk and local populace only, allowing a maximum of 1,000 persons per day and 1,500 persons on the special day on Dec.14. It had also recommended that compliance of COVID-19 precautions like thermal screening, checking for COVID-19 symptoms, maintenance of physical distancing, compulsory wearing of face masks etc., is ensured.

Following a State Government direction, the Mysuru District Administration has restricted the event to only locals. Accordingly, the local devotees are being allowed entry to the temples upon producting a photo ID card and devotees from outside are not allowed. As a crowd control measure, the Police have set up check posts on all the nine roads leading to Talakad and Mudukuthore and also on pedestrian paths leading to the two places. Barricades have been erected along the bed of Cauvery river that flows close by as a safety measure. Speaking to presspersons after taking part in the Panchalinga Darshana, District Minister S.T. Somashekar said he was virtuous to have been part of the event that has taken place after seven years, with the last one held in 2013.

Pointing out that he has prayed the almighty to bring peace and prosperity for all and to bring an end to the deadly COVID-19 pandemic, he said that the event, which used to attract lakhs of devotees in the past, is being celebrated in a simple and symbolic manner due to the outbreak of the pandemic.

Vaidyanatheshwara temple Chief Priest Anand Dikshith, speaking to the media, said that all  rituals associated with special Panchalinga Darshana were performed between 4.30 am and 7.30 am as per age-old customs, traditions and practices, simultaneously at all the five temples that form the cluster of Panchalinga Darshana. Although they sought the authorities to allow darshana till late evening on account of Amavasya, the District Administration has restricted it till 3pm. He further said that this year’s event will conclude on Dec.19 and the  next Talakad Panchalinga Darshan will take place in 2033.

Vaidyanatheshwara: Legend has it that Talakad got its name from two Beda community members Tala and Kada, who were granted moksha by the almighty. Vaidyanatheshwara is worshipped as a form of Lord Shiva. It is widely believed that devotees will get rid of diseases and ailments if they pray at this temple.

Arkanatheshwara: This deity earned fame as the Shivalinga was worshipped by  Soorya (Sun). This temple is located at  Vijayapura, about 5 kms eastward of Vaidyanatheshwara  temple. It is believed that worshipping here will rid the people of all their problems.

Pathaleshwara: The Shivalinga here was blessed by Vasuki and hence the deity is also known as Vasukeeshwara. The temple is called Pathaleshwara as the Linga here is located deep in the ground, when compared to other Lingas. This Linga is said to change colour five times a day and is specially worshipped on Shravana Shuddha Panchami day as it is generally believed that this is the most auspicious day.

Maraleshwara: According to legend, Lord Maraleshwara has control over all the sand at Talakad. Even Brahma is said to have worshipped Lord Maraleshwara and as such the deity is also called as Saithakeshwara. Devotees believe that all their wishes will become a reality by praying to the Lord.