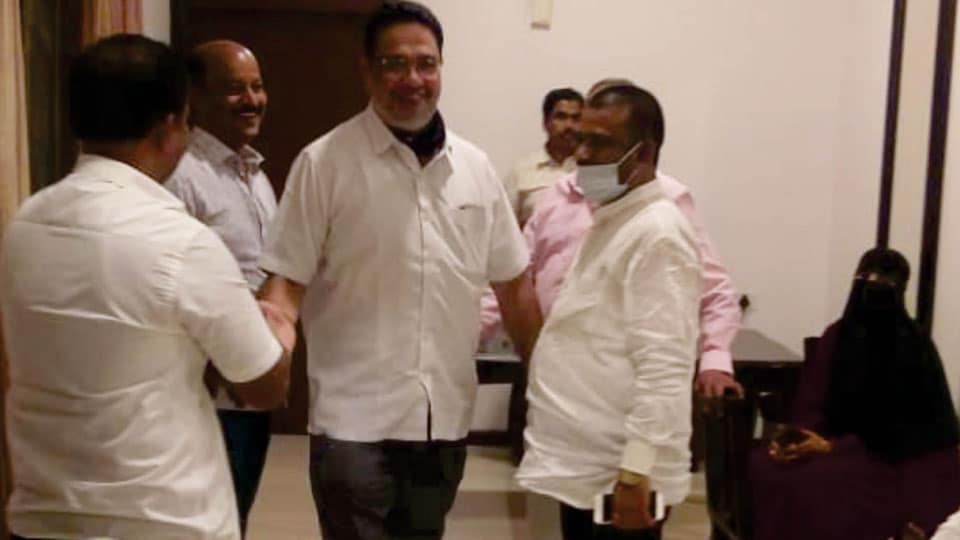 Mysore/Mysuru: The Mysuru Mayoral polls this time was suspenseful even a day before the voting.  This time the political scene was different over the strained relationship between Congress and JD(S), especially former Chief Ministers Siddharamaiah and H.D. Kumaraswamy (HDK).

Both the leaders have indulged in mud-slinging and have been washing their dirty linen in full public view after the collapse of the JD(S)-Congress Coalition Government. The changed political scenario has had its effect on the Mysuru Mayoral election where the Congress-JD(S) had an alliance.

As the JD(S) did not make its stand clear till the last moment on Tuesday night for the Wednesday morning elections, the three parties were on a literal waiting mode. While Congress MLA Tanveer Sait was waiting outside a resort to meet Kumaraswamy, BJP Mayoral aspirant Sunanda Palanetra was seen sitting outside the party office till late in the night. Even the JD(S) Corporators were waiting for a final word from HDK.

It was a long wait outside the resort for Sait hoping to clinch the continuance of the alliance. Sunanda too was hoping for a last-moment surprise alliance between JD(S) and the BJP. But both Sait’s and Sunanda’s wait proved futile as the JD(S) kept its strategy close to its chest.

Without naming Siddharamaiah, Kumaraswamy lashed out at the Congress Legislature Party (CLP) leader and said that certain irresponsible statements made by him have resulted in the alliance break-up. HDK was speaking to reporters at a resort in Mysuru this morning.

He regretted that a Congress leader was speaking lightly about JD(S) and referred to Siddharamaiah’s recent statement that he did not consider the JD(S) a political party at all.

“We had a coalition with Congress and we had sacrificed the Mayor’s post under pressure. This time coalition has not been possible because of statements by certain Congress leaders. We won’t go with anybody and we also will submit nominations, let us see who will get the opportunity to become the Mayor,” he said.

“Our leader H.D. Deve Gowda has refused any coalition with anybody. He has asked us to maintain distance with both BJP and Congress. Hence we won’t have a coalition with anyone. The time has come for us to show our strength. We have to pump confidence in our party activists and come to power independently in 2023,” he added.