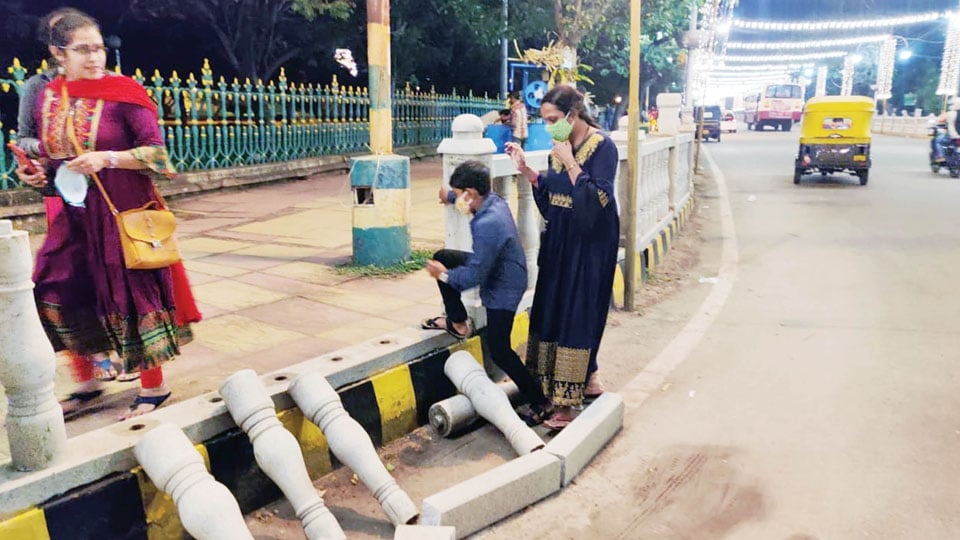 Footpaths cave in at 15 spots

Mysore/Mysuru: Walking around the Mysore Palace in the heart of the city has become a dangerous task of late, especially when thousands are coming onto the roads at night to see Dasara illumination.

The ornate stone balustrades of the Raja Marga have collapsed at 57 places with the pillars still lying on the road sides and the tiled footpaths have caved in at over 15 places around the Mysore Palace. One cannot normally walk around but has to hop, skip or jump to avoid a fall.

Normally ahead of Dasara, the Mysuru City Corporation (MCC) takes up road and footpath repair works. But this year, due to low-key celebrations, the budgets too were limited with which the MCC filled only the potholes at the Central Business District and thanks to poor quality works and rains, even the patchworks have been washed away.

Before Dasara, the balustrades had collapsed at over 34 places and as many people are converging around the Palace to see the illumination these days, pillars at over 23 places have collapsed ever since Dasara began.

One reason for this is huge crowd movements that were reported on the Vijayadashami day as they were not allowed inside the Palace. The balustrades erected on the Mysore Palace route via Sayyaji Rao Road up to Government Ayurveda College Circle under the much touted ‘Raja Marga Works’ (that began in 2010) could not even stand for 10 years. For the record, it was the ambitious project of the Mysuru City Corporation (MCC) under the Rs. 100-crore special grant to give a royal touch to the Jumboo Savari route.

Tiles laid on footpaths have come out and protrude dangerously all along the Raja Marga and its surroundings including Palace, K.R. Circle, MCC Office, D. Devaraja Urs Road and towards Dasara Exhibition Grounds.

READ ALSO  Bathing units sought in all 65 Wards for Pourakarmikas

As the tiles have come out in an erratic fashion, footpaths have become uneven with gaping holes causing a lot of public inconvenience. At many places, the tiles placed on box drains atop footpaths have broken and one careless step might lead to fractures and injuries.

Special care must be taken while walking on the footpath from Varaha Gate of Mysore Palace towards Dasara Exhibition Ground as most of the slabs and tiles placed on the box drains are broken while the stone slabs which were placed evenly have been displaced.

Many of the balustrades on the Raja Marga had collapsed before Dasara and even heavy rains and large crowds have caused additional damage. I will call a meeting of officers and will ask them to make an estimate so that repairs can be taken up. The broken tiles atop the box drains will be replaced. — G. Lakshmikantha Reddy, MCC Commissioner