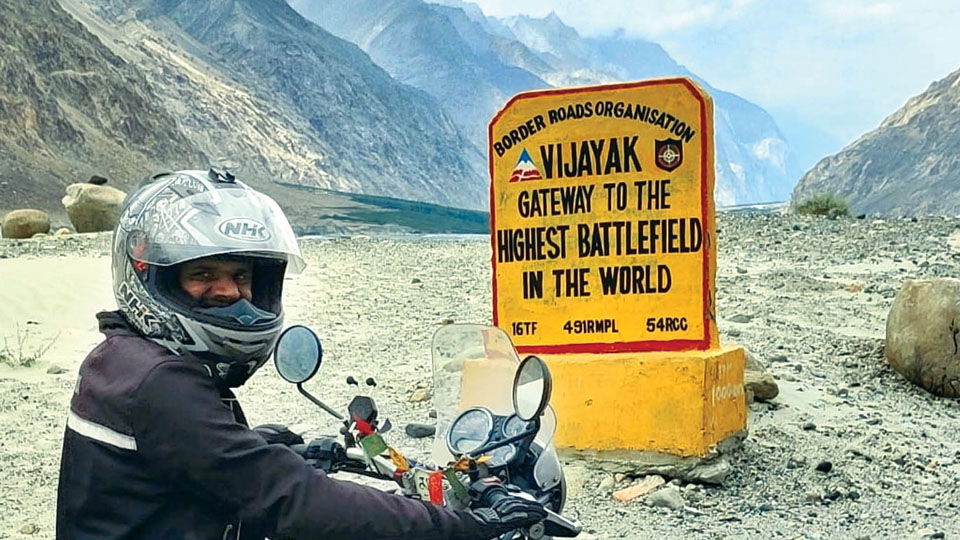 Working in a prestigious IT firm with a handsome salary package is the dream job for every techie. Goal accomplished. But not for this young techie from Mysuru who realised that his passion was something else, beyond the 9 to 5 job of coding and writing software programs.

He thinks nothing of hopping on his bike ready, in search of adventure. Once a software engineer, T.G. Manjunath indulges his wanderlust quite often and is an impulsive traveller at that. He is 26 and at work he missed something in life that is more valuable than working in a corporate set up.

He called it quits and chose to chase his dream — adventure and solo road trips. He has become a Hodophile who wishes to explore the new world out there. Since College days, Manjunath had a passion for bike rides, adventure and solo trips. In June this year, Manjunath bade goodbye to his job and a month later he was with his backpack.

He went on a solo adventure trip on his Himalayan Royal Enfield bike. On July 21, he began the adventure trip by visiting Mantralayam in Andhra Pradesh. Later he travelled towards Delhi, Agra, Amritsar, Wagah Border, Srinagar, Dalhousie (Himachal Pradesh), Zanskar Valley (Ladakh) and Siachen Base Camp.

Manjunath also discovered the new route in Zanskar Valley which is an isolated path towards the Trans Himalayan Region. The route which we took for Zanskar is: Jispa – Shinkula Pass – Padum – Zangla – Singe la Pass – Sisir la Pass – Wangla and from Wangla  to Leh. This was a 40-day trip that covered 6,500 kms.

Nobody can discover the world for somebody else

Speaking to Star of Mysore about his experience of the adventure trip, Manjunath said, “I always knew working in software is not my cup of tea. I worked there due to parental pressure. I always wanted to explore new things in life and we have to discover the world which we want. No one else will do it for us.”

He has been adventurous since College days and has participated in trekking, bike rallies and adventure sports. “I love riding bikes on killer roads which are the most dangerous routes in the world. This was my first long solo trip, which gave me the experience of a lifetime. Visiting Siachen Base Camp was a proud moment and I also visited the Zangla Monastery which is famous in the Zanskar Range. I had a thrilling experience while riding on Killar, Pangi Valley which is one of the dangerous routes,” said Manjunath.

He has been a fan of ‘Itchy Boots’ videos on YouTube, a Dutch traveller Noraly Schoenmaker who is popularly known as ‘Itchy Boots’, where she posts videos of her road trips. With over half a million followers tracking her trip around the world, she’s become one of the genre’s household names. Manjunath has been following her videos for three years and it highly influenced him to go on a solo trip.

“On the way to Ladakh I found three bikers like me — Tushaar, Shivesh and Imran — who were from Delhi. Then I joined their group and the trip became more adventurous and fun. I never thought I would make friends during my solo trip. Luckily strangers with the similar passion like me became friends. Sometimes travelling alone will offer you a bunch of surprises. Even today all three are in touch with me and planning for a reunion,” he revealed.

Manjunath has a dream of going on a trip to North Yungas Road, which is also called ‘Death Road’ in Bolivia. “This route usually goes by its more ominous moniker. Hairpin bends slice through thickly-forested mountain slopes and there are no guard rails to protect vehicles from the 600 metre drop. It is considered the world’s most dangerous road,” he said.

Manjunath further explained how people helped him with accommodation and guided him to reach his destination easily. Also he faced no restrictions in this time of pandemic. His story is inspiring to all those youngsters who want to follow their passion. “No matter what you do in life, it’s never too late to follow your heart,” he exclaimed.

Manjunath completed his solo adventure trip with the savings from his salary. Besides, many friends helped him when he fell short of money during the journey. Now after returning from the trip, Manjunath has a better future plan than working in IT Company. He wants to form an adventure bike club in the city, where he could organise adventure road trips and encourage young bikers towards adventure.

A resident of Kuvempunagar, Manjunath’s family hails from Talakad. His father T.N. Gopalakrishna is an accountant in a temple while his mother Gayathri is a home-maker and sister is a teacher at a private school.