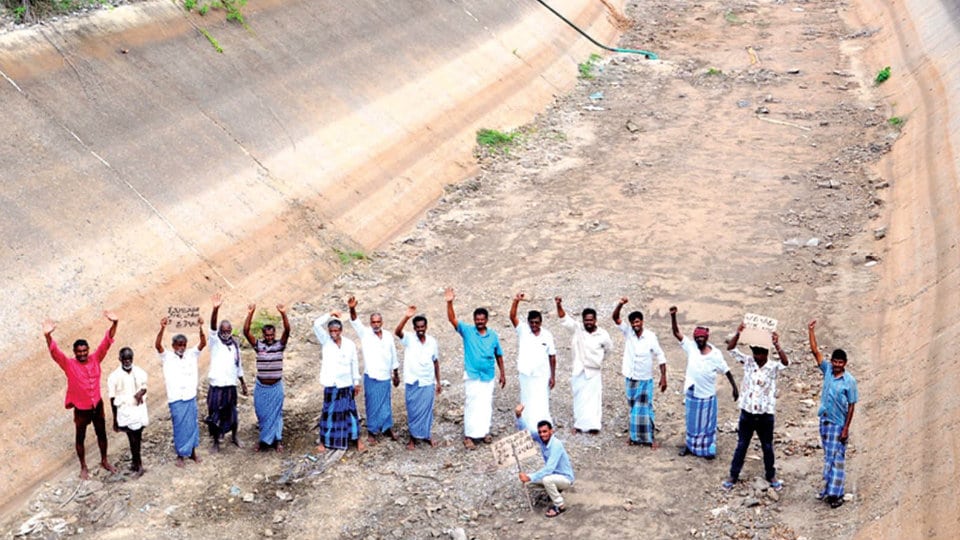 Mandya/Mysuru: Even as the MLAs of all three major political parties in the State are busy formulating strategies either to safeguard the State Government or topple it, the farmers of old Mysuru region, especially those from Mandya and Mysuru districts have taken to streets in protest against the release of water to Tamil Nadu from KRS and Kabini reservoirs.

While a few farmers staged a dharna by blocking the Mysuru-Bengaluru Highway near Induvalu in Mandya and also in Maddur, the others took to extreme step of getting into the channels in protest against the release of water.

The farmers in Mandya have also threatened to boycott MLAs of the district. They alleged that at the time when there is a need for the representatives to be with protesting farmers, the MLAs were busy relaxing in resorts. The protestors also expressed their displeasure over Mandya MP Sumalatha Ambarish stating even she had not visited the Constituency.

Meanwhile, a few farmers staged a protest inside a dry canal at Gejjaganahalli against the release of water from Kabini reservoir to Tamil Nadu. The farmers said that while the authorities had failed to release water to the canals for the past three years, all of a sudden, Kapila River water was being released to Tamil Nadu.

Meanwhile, Nanjangud farmers staged a half naked protest by getting into Kapila River. They alleged that when there was a severe rain deficit and shortage of water for farming activities, the authorities had released water to Tamil Nadu.

The outraged farmers, who have threatened to intensify their protest, have demanded to stop the release of water Tamil Nadu immediately. They are of the opinion that despite Cauvery Water Management Authority’s decision asking to release water only after storing sufficient water at the reservoir, officials have turned a blind eye to directions and have released the water to Tamil Nadu on State Government’s order.