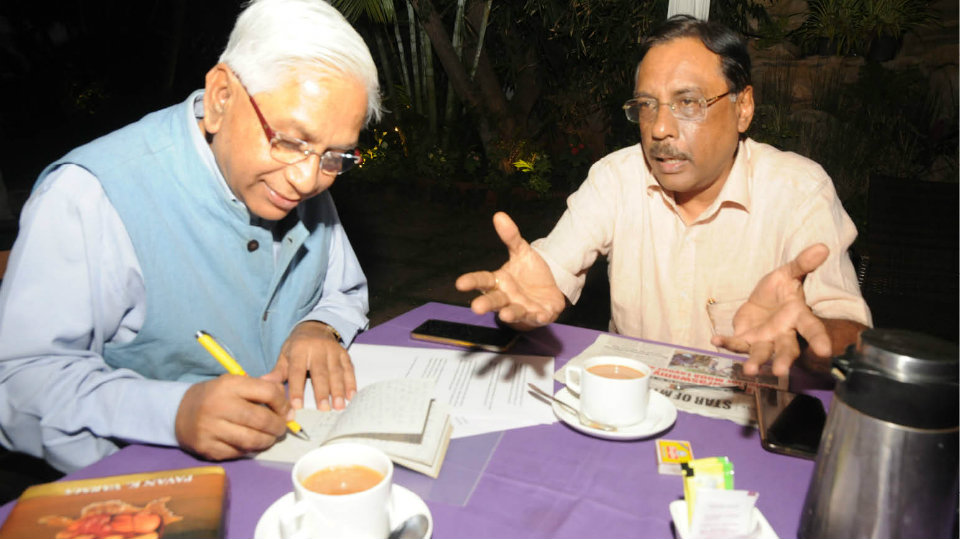 Star of Mysore (SOM): Till recently you were a Rajya Sabha MP and earlier Advisor to Bihar Chief Minister Nitish Kumar. Many diplomats retire quietly but you resigned. What made you take the decision to plunge into politics?

Pavan Varma: (Smiles) Well, as a result of my writings I was considerably well-known in public life but I think politics gives you a much wider stage to articulate your concerns on national issues. While I thoroughly enjoyed my diplomatic life, as a bureaucrat I could sense the constraints on being able to speak openly and with conviction from a wider platform on issues that concerned me, which I believe were relevant to the nation and, therefore, I moved to politics.

SOM: As the National General Secretary and National Spokesperson of the JD(U)  and as a Philosopher-Politician, how do you read the current political scenario in the country?

Pavan Varma: I think that we need to rescue politics from being reduced only to Saam Daam Dandh Bhed to rescue and redeem it from only concerns regarding the winnability of elections and the pursuit of power. We need to infuse it again with some degree of idealism, of ideology and of the elevation of thought.

So while politics must be always disproportionately obsessed with the immediate, it must also be informed by the long term national interest and if I can contribute in speaking with courage and as fearlessly as I can on matters which restore to politics some of these aspects, I believe I would be satisfied.

SOM: Going back to your student days, you were the President of St. Stephen’s College Debating Society as well as the Star Debater and Elocutionist of the University of Delhi. What were those days like?

Pavan Varma: Oh, I have very happy memories of my days in St. Stephen’s. I did History Honours. I did well, I stood first in college. They were days of a certain emphasis given to academics which I enjoyed greatly. After that I did Law because law has been in my family. My grandfather was the first Indian Chief Justice of Uttar Pradesh, his son was the Chief Justice as also a few other members of my family. My father, of course, joined the Civil Service and his cadre was Madhya Pradesh. So I just followed in his footsteps and joined the Foreign Service.

SOM: The natural progression after so much of achievements was to join Indian Foreign Service. Do you have any particular experience that you like to share in your long stint?

Pavan Varma: You know I had a very fulfilling stint in the Foreign Service. I have had some very interesting assignments in New York, London and Moscow and even more importantly at the Head Quarters in Delhi. I have been the official Spokesman of Ministry of External Affairs (MEA). I have been in the Prime Minister’s Office (PMO), I have been the Press Secretary to two Presidents of India  — R.Venkataraman and Shankar Dayal Sharma. I was not even 36 or 37 years old then. I have been Director General of very large autonomous organisation under MEA called Indian Council for Cultural Relations (ICCR) and, of course, my last post is as Ambassador in Bhutan, a very sensitive assignment, very fulfilling and challenging. I am glad I made the transition from bureaucracy to politics when I did. I resigned when I was 58 years old.

READ ALSO  “Buddha has more influence on Japan than India” - 1

SOM: Apart from Adi Shankaracharya, you have written many books and the two particular titles that aroused my curiosity was, “Being Indian: Why the 21st Century will be India’s” and another book “Kamasutra: The Art of making love to a woman.” Can you briefly share about these two books?

Pavan Varma: (Laughs). “Being Indian…” is an irreverent book but an honest one. It is a book that looks at ourselves not in terms of who we think we are or who we ought to be or who people think we are but who we actually are. So to that extent it is an honest book. And that is why it has sometimes created some level of controversy. And it is my argument that it is precisely because of who we are that we must be honest about our weaknesses and it is because of precisely of who we are that we also have certain strengths which to my mind gives us the resilience to be one of the major powers of the 21st century.

“Kamasutra,” while the title may seem to indicate aural approach to such matters, I approached it to understand it as an integral part of the Hindu world view. What is the role of the sensual as part of the integrated world view of Hinduism as illustrated by its four Purusharthas — Dharam, Artha, Kama, Moksha — and to understand the philosophy behind having a book like the Kamasutra written by a sage called Vatsayana. Most people see it as a book of impossible postures to be read furtively without understanding why such a book was written, what it reveals about the world view of Hinduism which like most ancient civilisation has a complexity which cannot be understood only at the superficial level. Anyway, it is one of my minor books. It is one of those books you write also, but it is a significant one to write.

SOM: Do you see yourself as a Minister after the 2019 General Elections?

Pavan Varma: (Pauses) I don’t see myself in terms of any posts. Let me tell you a small anecdote which may interest you. After I resigned and when I met Nitish Kumar (Bihar’s Chief Minister), we had not discussed about what I would do except I had told him I would like to assist him. And when I went to meet him in Patna, he in the course of our conversation said he would like me to be an Advisor with Cabinet rank and I must have protested for almost ten minutes. Because, frankly that was not what I was thinking.

In other words, if you do politics only in terms of fruits of office I think somewhere it is not the kind of politics I wish to do. However, if in a situation a responsibility is given to me I have the confidence that I will be able to contribute in the best possible way in the larger good of the country.

But we don’t know what will happen in 2019, we don’t know who will form the government and in such a situation to answer a hypothetical question ‘if I see myself as a Minister’ (laughs), I think I am not a soothsayer nor do I predict and frankly nor is my space in public life defined by expectations. It is rather defined by what I can contribute in consonance with what I believe is right and what is good for my country.

SOM: There is an anecdote about you revealing to Author and Journalist Karan Thapar which he mentions in his book “Devil’s Advocate: ‘Modi said, to Prashant that he will never forgive you (Karan Thapar) and when he gets an opportunity he will take his revenge’.” Is this true?

Pavan Varma: I have already clarified it in the public domain through a tweet which has gone viral that I was a bit surprised to see Karan Thapar’s account of our conversation and I disagree with his recollection of how  it has been portrayed.

Let me add that normally a journalist in a private conversation, if he is writing by recollection,                                   will seek permission or validate it, since it happened almost a year ago. As I have dealt with a lot of media, I expect the same from the author. And this is more so, as he is quoting from a third person who happens to be Prashant Kishor here and his conversation with me. And the rule is, a conversation is on record or it is off record.

And even if it is off record, I have never shied away from speaking the truth and anyone who reads me or watches me on television irrespective of the situation know that I speak what I say and what I believe in. So I would not deny it, but to do it unilaterally, I thought, it was both inaccurate, unethical and I have said it so publicly.

SOM: That means he has misrepresented you?

Pavan Varma: Yes, it was misrepresented. You are also a journalist. If we are having an off the record conversation sitting and having a cup of coffee would you print it without any reference to me? Or would I talk to any journalist if I would believe that one year later he would take a private conversation, reconstruct it as he remembers it without any reference to me, print it, put it in a book and then I come to know? Is it your definition or mine of ethical  journalism? I don’t think so.