Home » Feature Articles » “We need to rescue politics from being reduced to Saam, Daam, Dandh, Bhed” – 1 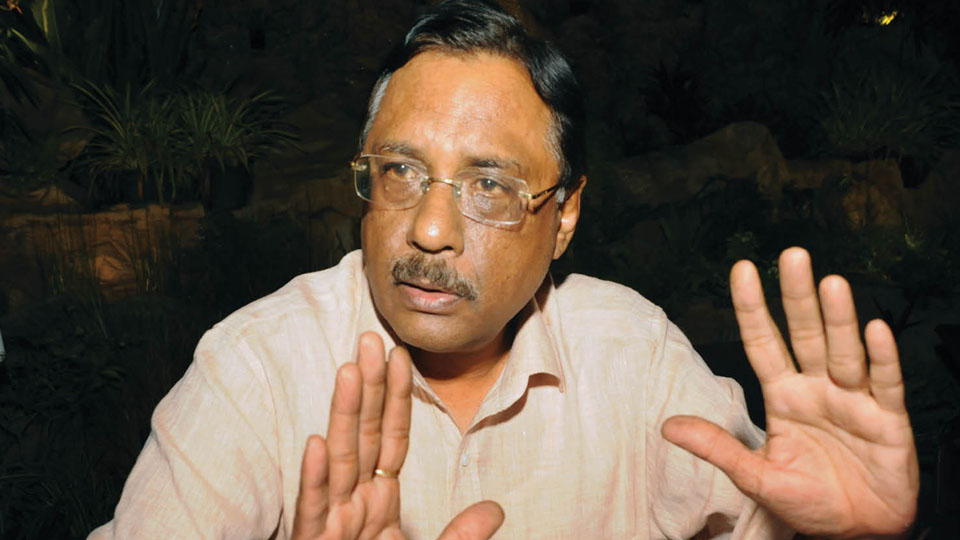 “We need to rescue politics from being reduced to Saam, Daam, Dandh, Bhed” – 1

To say nothing, especially when speaking, is half the art of diplomacy. —Will Durant

There are many diplomats who typify what the great writer-philosopher Will Durant voices. However, there are a few exceptions among them who do not hesitate to speak their mind and one such person is Pavan Kumar Varma, the diplomat-writer-philosopher-politician, all rolled into one. He was in Mysuru recently to participate in the Mysuru Literary Fest organised by the Mysore Literary Association (MLA). The scholarly talk he delivered on “Adi Shankaracharya: Literature, Philosophy and Society” had everyone thinking about the narrative of the country and the way forward.

Star of Mysore Features Editor N. Niranjan Nikam caught up with Pavan Varma (who was completely impressed with Mysuru), at Hotel Southern Star and in this candid, no holds barred interview for nearly 45 minutes, the Philosopher-Politician spoke about the reason for writing the book on Adi Shankaracharya, the many books he has written, his foray into politics and about the controversy regarding the mentioning by Karan Thapar about him in the book Devil’s Advocate. Excerpts. —Editor

Star of Mysore (SOM): You are described as a rare breed, a Philosopher-Politician especially after writing the newly-released book ‘Adi Shankaracharya-Hinduism’s Greatest Thinker.’ How do you react?

Pavan Varma: Well, I don’t know if I am rare but I can say that I have several interests. I have been a diplomat and even as a diplomat, I was a writer. My first book came out in 1989 and it was a biography of Mirza Ghalib called ‘Ghalib: The Man, The times.’ It was published by Penguin and in fact 14 of my books have been published by them. In all, I have written 22 books and the subjects themselves are very wide ranging from a biography, to a book on the Havelis of old Delhi, on Krishna, to my seminal contemporary work, which was not only a best-seller but a book of much discussion called The Great Indian Middle Class. After which I wrote Being Indian and then Becoming Indian and later, Chanakya’s New Manifesto to resolve the crisis within India.

Then I wrote a novel called ‘Loss is Gain’ which is now being made into a Bollywood film. So the subjects are very varied. I have been interested in poetry,  so I have an epic poem called ‘Yudishtar and Draupadi’ which Gulzar Saab has translated, as he fell in love with the book, then he wrote a play on the book called ‘Paasa’ (Dice) and it has been performed in many places in India and abroad.  Now I am doing a book with Javed Akthar and Shabana Azmi.

Diplomacy has remained a profession and now I have come into politics and my latest book Adi Shankaracharya, of course, deals greatly with Philosophy and the quest for truth. In that sense you can say I have wide ranging interests. Whether I am a rare breed or not, I don’t know. I may add that I am very fond of classical Indian music and I believe that it is important not to be uni-dimensional.

SOM:You had a purpose in writing the book on Shankara at a time when there is so much of unrest in the world. Apart from Shankaracharya being the greatest thinker, what prompted you to write it?

Pavan Varma: I was fascinated both by his life and philosophy and through him I wanted not only to understand his philosophy, which is Advaita philosophy but to get a window to the entire structure of Hindu philosophical thought. Because I believe it is impossible to separate Hindu religion from Hindu philosophy. And my worry was since Hinduism is a way of life, it does not have a Pope, a church, one text, one temple, one God, one mandatory congregation, one prescriptive ritual alone; for many Hindus since it is a way of life they had become adrift from the profundity of thought that underpins Hinduism.

And so not only as a voyage of discovery for myself but for my readers I wanted to take them back to the maulik soch, the power of original thought that underlies the philosophical structure of Hinduism and it is particularly relevant today because we have a new and aggressive form of Hinduism propagated by some ultra-right wing elements whose evangelism or aggression is in direct contrast to ignorance of Hinduism itself. So, I needed to be able to counter them by quoting Hinduism itself.

SOM: Literally you traversed the route that Shankara took right from his birth place Kaladi in Kerala to all the four Mutts he established. What was your experience like?

Pavan Varma: That was a fairly remarkable experience for me because it left me in certain degree of awe that 1,200 years ago, a man born in Kerala could take his Samadhi in Kedarnath, travel the length and breadth of this land by foot not once but three times and who also in the short span of 32 years of his life set up the four Mutts which really defined the civilisational map of India — South, North, East and West.

To traverse that journey and discover in those places of the evidence of his being there and very often search for evidence that has ceased to exist that was a challenge also. But on the whole I had resolved to write this book not within the confines of my study but to actually visit the places his life was associated with so that by doing this I could understand the discovery of his thought and travels, since he had chosen to be a wandering teacher, that was a discovery too.

SOM: But how long did you take to complete the journey?

Pavan Varma: You see I am not a full time writer. When I was a diplomat I wrote many books as I told you earlier and they too were only when I had the time from my professional duties as a diplomat which was quite demanding. Similarly now politics is a jealous mistress and it also makes the availability of time unpredictable. Therefore, it is a measure of special interest and a matter of time management like with all other books. It took me three years oscillating between my political preoccupations and from there delving into the realms of deep philosophy to write this book.

SOM: One of the most important chapters you have written is titled “The Remarkable validation of Science” where you conclude about the importance of Shankara’s thinking to today’s scientific world and hope that scientists will take note of it. Please comment.

Pavan Varma: I do not wish to make facetious correlation or superficial one. I do not belong to the Dinanth Batra School of Hinduism which seeks to claim that everything that took place or is happening today was already happening in ancient India thereby trivialising both the great and many great refinements of ancient India and Hindu philosophy and religion.

My purpose was a more serious contemplation on whether what was seen through the philosopher’s eye in terms of who we are as individuals and what this universe and cosmos is about is in some manner being also validated by the latest discoveries of science.

And frankly, as far as I am concerned, the correlations that I looked at were exceptionally revealing and it required a considerable amount of research, since I am not a science student, I did history and law. To see the discoveries of cosmology to go into areas like quantum physics and neurology to be able to plausibly, if not convincingly, make that correlation and I think it is important because when science comes to a dead end or when it cannot find answers which are complete in themselves, it comes back to philosophy.

There was a time when the strides being made by scientific discovery made philosophers to say like Nietzsche did “God is dead” or Stephen Hawking to proclaim that “Philosophy is dead.” I think they should have read something of Hindu philosophy, especially Shankara and they would perhaps need to revise their estimation. So philosophy at least in terms of our own legacy in Hinduism is very much alive and is particularly relevant today.