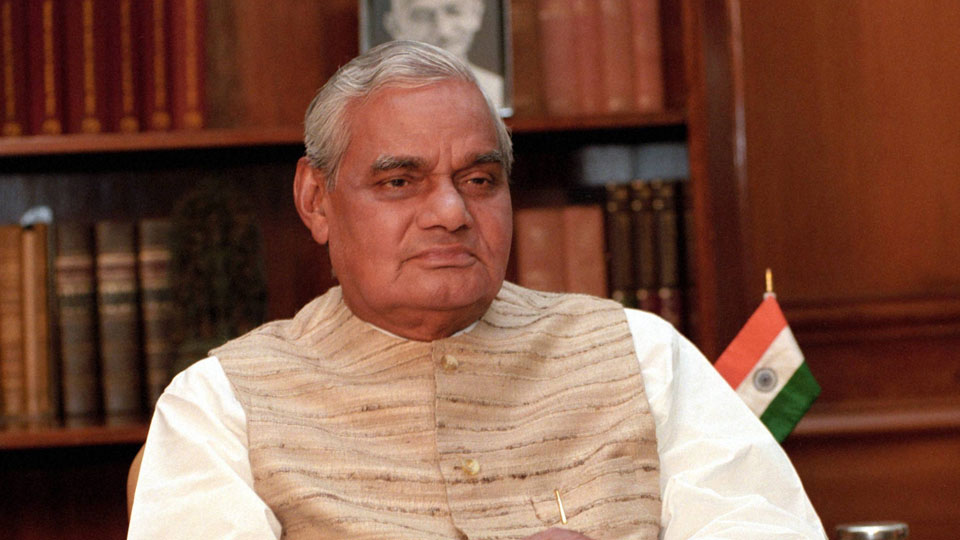 The Prime Minister as Gentleman

Never let me climb so high that I’m unable to embrace a stranger.

The humanism in Atal Bihari Vajpayee made him taller than a Prime Minister. In the vastness of his mind the ephemerality of political glory counted for what it was. He once said: You might become an ex-Prime Minister one day, but you will never become an ex-poet. He was a universalist, his literate self dwelling above his political persona.

Vajpayee was reared in the RSS school, attending officers’ training courses from 1940 and qualifying as a full-time pracharak the year India became independent. But he was seldom seen as an activist pracharak preaching the prescribed gospel. He looked more like a dreamer, reaching out to people in ways that went beyond his training. Although he is on record as saying “The Sangh is my soul,” sensibilities of a larger mission seemed to be working within him. Above the pracharak and the politician was the poet. His spirit roamed free.

This drew wider attention as Vajpayee entered Parliament. It is part of legend that the young MP’s flowing oratory turned Jawaharlal Nehru into an admirer. The oft-repeated story is that Nehru would rush to the House when Vajpayee rose to speak, and that he once told the BJP leader: One day you will be Prime Minister. Nehru sent him to the UN General Assembly one year to help him get international exposure and some useful training in diplomacy.

Such non-partisan functioning in the larger interests of the country is difficult to imagine nowadays. Nehru’s very name has become taboo in patriotic circles and young leaders of Opposition parties are ridiculed as childish. One reason Vajpayee rose to greatness was that he lived in an age that valued political courtesies and did not allow petty-mindedness to cast shadows upon it. That age is behind us. What the poet in Vajpayee described as “darkness in the middle of the day” has come.

READ ALSO  India has broken its own traditions by joining US-led strategic group. This will restrict Delhi's options

It started sending early signals in the middle of Vajpayee’s term in office. His stature had grown as he progressed from frustrated short terms to a full term as Prime Minister beginning 1998. The Pokhran atomic explosion that year and the Kargil War the following year put garlands of glamour round his neck. He asserted his personal supremacy over his party hardliners when he took a bus to Lahore in 1999. His initiatives for peace provoked a Vishwa Hindu Parishad Secretary to call him a “pseudo-Hindu.”

The ultra Hindus got their chance to punish him in 2002. When Gujarat exploded into communal violence that year, Prime Minister Vajpayee was outraged. Within a month of the atrocities he visited the State and said at a press conference that the king’s duty to uphold rajdharma had not been carried out. He decided to seek the resignation of the State’s Chief Minister when the National Executive of the BJP met in Goa a few days later. The flight to Goa turned out to be one of the most historic in India’s aviation history. L.K. Advani and Arun Jaitley strongly opposed any action against the Gujarat Chief Minister. Vajpayee was further rattled when slogans were raised at the meeting in favour of the Chief Minister. Vajpayee had to forget his concept of rajdharma and watch his critics celebrating their triumph.

The post-Goa Vajpayee was a politically enfeebled Vajpayee. Advani now became Deputy Prime Minister. RSS demanded a meeting with the Prime Minister and got it, establishing the restoration of its political influence, which Vajpayee had kept at near-zero level all along.

For these extraneous reasons as well as for the vibrancy of his mind, Vajpayee’s place in history will be above that of all others in his party. He represented the ethos of the nation — spiritualism without zealotry, tolerance, liberalism. Such was the roundedness of Vajpayee’s make-up that we could stand up and say to all the world: This was a gentleman. And sing with him: It’s dark in the middle of the day / The sun is defeated by its shadow / Squeeze the oil from your soul and feed the wick / Come let’s light the lamp again.

4 COMMENTS ON THIS POST To “The Prime Minister as Gentleman”