Home » Columns » Lalu is natural target in the fight against corruption, but the problem is larger. All parties are guilty 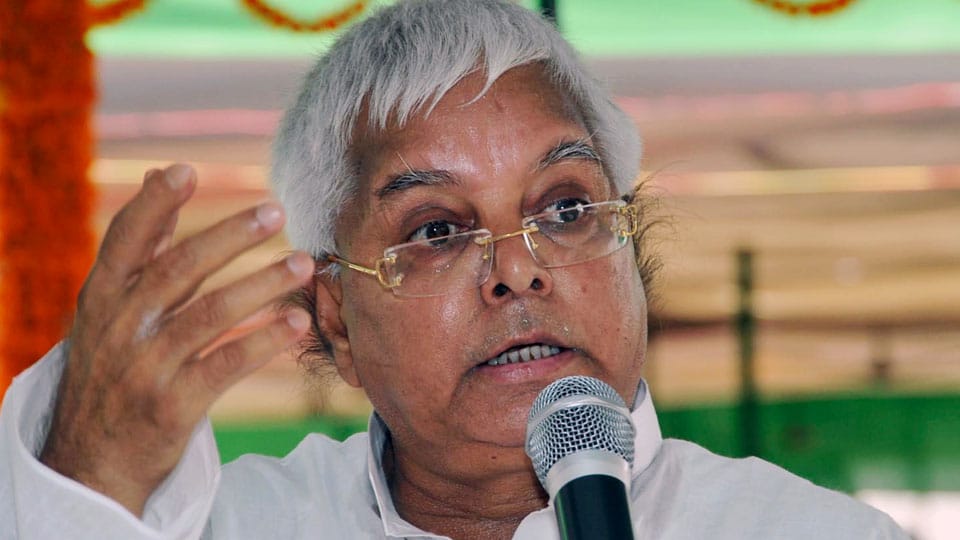 Lalu is natural target in the fight against corruption, but the problem is larger. All parties are guilty

Mention corruption, and the names of some politicians jump out like registered trademarks. Lalu Prasad Yadav is right when he says that the BJP Government is hunting him for political reasons. The Government has indeed been using the CBI to hunt its opponents on a selective basis. But it is able to play politics of revenge because facts are there to exploit. Lalu has been a synonym for corruption in unique ways — the only leader who breaks laws with defiance and daring.

When his second daughter Rohini got married in 2002, arrangements had to be made on a grand scale, which meant dozens of cars for guests, comfortable sofas and chairs for use in the pandal, dry fruits, provisions, garlands and so on. Organising them was no problem for Lalu. Musclemen walked into car showrooms in Patna and just took away all the models there.

Others went to furniture storerooms, cake shops, grocery shops, fruit and dry-fruit stalls and flower shops and just took things away. What an original idea! The press published reports but didn’t quote shop-owners who were so scared that they pleaded for anonymity. But Rohini got happily married. Those were also days when kidnapping for ransom flourished. Well-known doctors were among those who lived in fear.

No Indian politician has so openly misused power. Nor has any other leader pushed the family into power with the same ‘I-am-the-proprietor’ attitude. When the courts disqualified Lalu following the fodder scam (fraudulent payments for non-existent cattle feed), he unashamedly put his illiterate wife Rabri in the Chief Minister’s chair. In the united front with Nitish Kumar, he got two of his sons into the Cabinet, one as Deputy Chief Minister. His daughter Misa, inheritor of many of her father’s special talents, is in Parliament.

Left to himself, Lalu Prasad would think it perfectly natural for Rabri Devi to become President of the country, Misa to become Prime Minister, Tejaswi the Home Minister with additional charge of Industries, Finance and Information, Tej Pratap the Chief Minister of Bihar, and daughters Rohini, Ragini, Chanda, Hema, Rajalakshmi and Dhannu to be named ambassadors to the world’s big powers. He would want nothing for himself except his formal portrait to hang in all government offices as the most loving husband and father in Indian history.

How nasty of CBI to get going suddenly and shatter all the dreams. It filed charges with unusual promptness, claiming that the family had acquired nearly a thousand crore rupees worth of benami properties in a decade. Contracts for the maintenance of railway hotels and licence for a liquor factory were the kind of favours given in return for prime properties. There was a “gift” of land even by Rabri Devi’s cattle-shed owner. Some unkindly opponents referred to Lalu as “the Robert Vadra of Bihar.”

Lalu’s operations were wide and his attitude reckless. Therefore he made himself easy prey to his opponents. But deeper is the corruption that goes on at the grassroots. There has been a drop, since Narendra Modi’s rise, in big-ticket scandals in Delhi like the Commonwealth Games or the Spectrum sale. But that does not lighten the burden of everyday corruption that continues as before. The last Transparency International report put the total bribe Indians paid to access routine government services at Rs. 21,000 crore. (How? Go and register a trust or a will at any sub-registrar office and you will know).

READ ALSO  The transmitter of civilisation

All parties contribute to this shame despite the BJP’s holier than thou posture. A former Gujarat Chief Minister’s daughter faced charges of getting 422 acres of land from the State Government at Rs. 15 per square meter when the government’s own prevailing rate was Rs. 180 per square meter. The long-running Vyapam scam in Madhya Pradesh rocked Parliament again recently but is yet to be fully investigated. Lalit Modi, with friends in BJP, is not trawled the way Vijay Mallya is though both are absconders of the same kind. Most importantly, some BJP leaders in Kerala have been found to have taken money to help start new medical colleges in the State.

Prime Minister Modi made yet another call for a corruption-free India when he said, at the all-party meet on the eve of Parliament’s current session, that it was the responsibility of all political parties to take action against corrupt leaders. All parties? That sounds like an instruction to the Karnataka BJP to find a clean Chief Minister candidate instead of one who was jailed for corruption the first time around.

ONE COMMENT ON THIS POST To “Lalu is natural target in the fight against corruption, but the problem is larger. All parties are guilty”