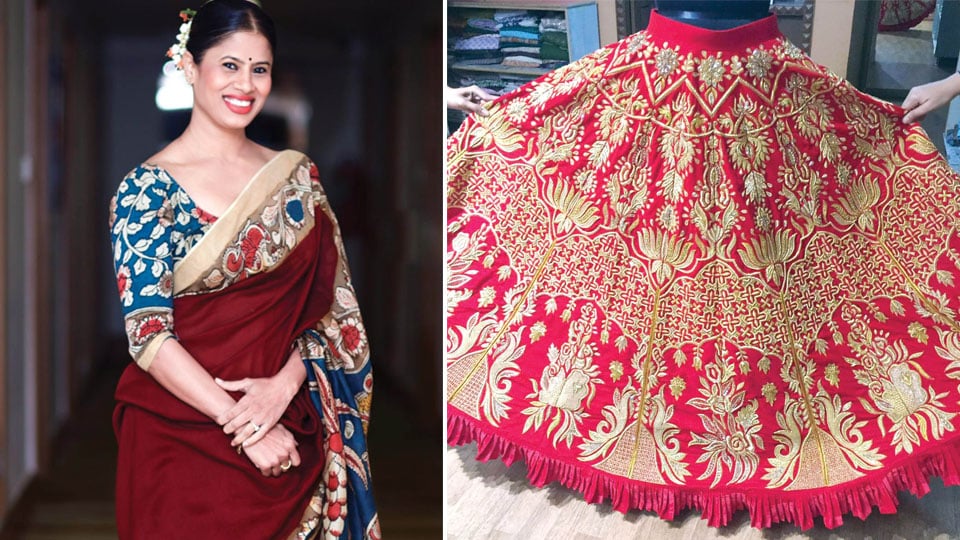 From a tiny workshop with one masterji and an assistant in Azeez Sait Nagar and a handful of clients, to a high-end boutique with about a dozen craftsmen, a list of elite clientele, her own label and Mysore Fashion Week under her belt, it has been a long journey for the city-based designer Jayanthi Ballal.

Two decades in fashion industry must feel amazing, isn’t it? I ask. ‘Yes, amazing but challenging at the same time; it has been one hell of a journey,’ replies the fashion entrepreneur who is credited with putting Mysuru on India’s fashion map.

She fondly recalls the days when she was called ‘tailor aunty who took measurements’ and charged Rs. 40 for the blouse stitching.

‘I had the starting trouble as my in-laws were conservative. It was a big no for women in the family to work outside, but with my husband’s support, I was able to fight all odds and set on a hitherto unknown journey,’  tells Jayanthi.

‘It was easier to cross the hurdles at home, but the bigger challenge was people’s attitude towards this industry. They didn’t understand fashion but now Mysureans are more receptive to change, and it is easier for new designers to make their mark,’ she adds.

Gradually, the list of her clients increased and within no time she was designing a variety of ethnic clothes.  She had exotic designs but nowhere to showcase her creations. As a result, the Model Hunt was started to groom young boys and girls to walk the ramp which provided a ready platform for not only Jayanthi but also other designers in the city to showcase and promote their creations.

Many of her models later went on to participate in various fashion shows across the country and also got opportunities in the modelling and film  industry.

Soon a brand-new boutique named Needle Works came up. ‘But within a couple of years, many new boutiques came up in the neighbourhood with similar sounding names, so I decided to change the name and give it my own label,’ says Jayanthi with pride.

One thing led to another. Soon Jayanthi, who specialises in traditional clothing, had clients from outside Mysuru which gave birth to an idea to do something for the city and thus came Mysore Fashion Week.

A few names who debuted in Mysore Fashion Week later went on to showcase their creations in renowned fashion shows across the world and style celebrities. To mention a few — Sanjukta Dutta from Assam, Arvind Ampula from Hyderabad, Rajyalakshmi Gubba from Hyderabad and Robert Naorem, the make-up artist.

‘I’m humbled to be a part of their phenomenal journey,’ signs off Jayanthi.

Note: Mysore Fashion Week – Season 6 will be held in the last quarter of 2022.