Home » Columns » Abracadabra By K. B. Ganapathy » Swami Vivekananda’s vision for future of India, as I understand -1 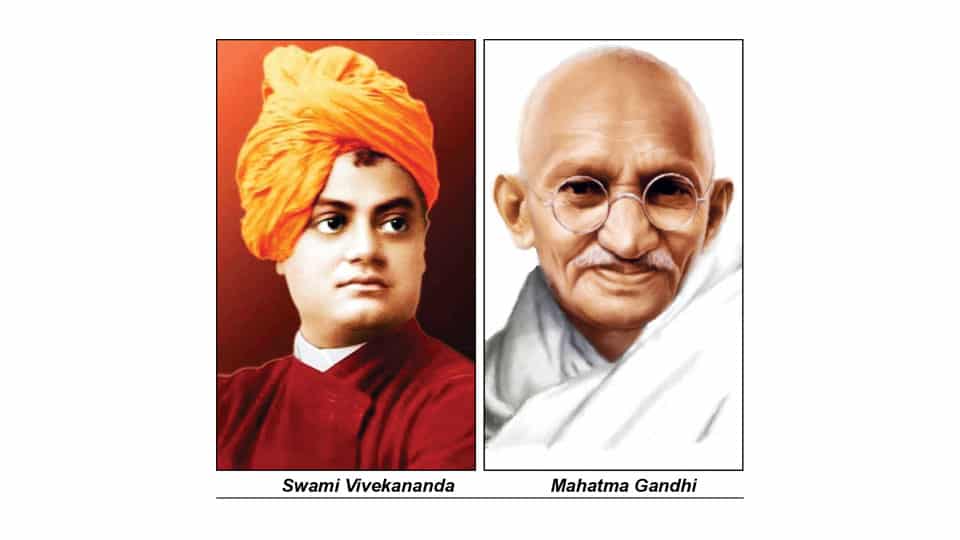 Swami Vivekananda’s vision for future of India, as I understand -1

Recently I was invited by Swami Muktidanandaji, head of Ramakrishna Ashram, Mysuru, to speak on Swami Vivekananda’s vision for India at the Ramakrishna Institute of Moral and Spiritual Education (RIMSE), Yadavagiri. Produced below is an extract of that talk I thought of sharing with ‘Star of Mysore’ readers:

The subject of my talk is indeed very much relevant to present day India, 120 years after Swami Vivekananda passed away. Probably, most of the time, he was talking of India after him, the Future India.

He was a Hindu Monk of Himalayan heights. He was a spiritual bridge between 19th and early 20th century for India, but after his four years of sojourn in America, England and Europe, he became an acknowledged Hindu Spiritual Guru for those who are seekers of truth.

I may not be wrong if I say that in India during late 19th century and 20th century, people of this country, specially Hindus, were aspiring for two kinds of salvation. One is Spiritual salvation and another Political salvation. It was a time when Britishers were ruling us. India as a country was under both spiritual and political eclipse. India was looking for a new dawn of freedom and spiritual revival.

It was at this period of doubts and uncertainty about Hindu religion and political slavery, the providence blessed this country with two great souls, each with separate goals. If Mahatma Gandhi was a political bridge between 19th and 20th century India, Swami Vivekananda was the spiritual bridge.

Looking back today, we could proudly acknowledge the role played by these two extraordinary Indians, one in awakening the spiritual and religious consciousness among the people and the other in creating political awareness among the people. No wonder, for the first time people in thousands participated in Freedom Movement. It was a success story for both. If Swami Vivekananda

gave us Sri Ramakrishna Ashram and Mutt, a spiritual power house for seekers of divine power and truth, Gandhiji helped us gain freedom.

It is said he travelled across India for 10 long years as a young Sanyasi, blessed by his Spiritual Guru, the Master, Sri Ramakrishna Paramahamsa. He was blessed with a magnetic personality and would attract anyone who came in contact with him with his power of speech. In fact, he was a visionary Monk who could probably see the future. So much so, he had impressed two celebrities in the West by recalling their past and predicting the positive side of the future. Did he have mystical powers?  I do not know.

Of course, we know he was catapulted to the world’s stage following his famous speech at the World Parliament of Religions at Chicago in 1893. Since then, his concern for the future of India found expression in all his speeches, letters and even activities.

The first of these concerns we find in his well-documented meeting with the Father of Indian Industry Jamsetji Tata, aboard a ship that carried both of them to America.

Jamsetji Tata told Swami Vivekananda about his project of setting up a steel plant and mentioned of the purpose of his visit to America for buying required machines etc. It was at this point Swami Vivekananda, aged about 30, told Jamsetji Tata that instead of importing machines from abroad, he should manufacture them in India. Swamiji also impressed upon Jamsetji Tata the need for practising asceticism and humanism of India along with its industrialisation.

It was this meeting that inspired Jamsetji Tata, though after many years, to establish a research institute of Science which finally materialised in Bengaluru, Tata Institute of Science, now known as Indian Institute of Science (IISc). This, therefore, was the vision of Swami Vivekananda for India. And Jamsetji Tata with a little help from the then Maharaja of Mysore Krishnaraja Wadiyar IV, who gave 372 acres of land for the purpose, free of cost, made that vision of Swamiji a reality. No wonder if there is one industrial house known for its ethical practice, it is Tatas.

Swamiji’s vision of future India was prosperity and progress of its ordinary millions. Sadly it did not happen even after 120 years of his passing away. Of course, we see now some signs of Swamiji’s vision materialising in this regard following government schemes meant exclusively for the poor and the deprived classes, say BPL Card holders.

Many are of the opinion that Swamiji, being a spiritual person, a proponent of Vedanta, did not bother about the

mundane concerns of the people like freedom from foreign rule and poverty alleviation. That was absolutely wrong. Mahatma Gandhi gave a thrust for the freedom movement. Mahatma Gandhi came to India, after making news in South Africa, only in 1915. But before his arrival, Swamiji had passed away in 1902. However, he had made the most important prediction that has already come true. Freedom of India.

He had said in early 1900 India would be free within the next 50 years under unforeseen circumstances. And as predicted we got independence in 1947. Some of Swami Vivekananda’s clarion calls to the seekers of truth and freedom are inspirational for future India. Like for example:

• Arise, awake and stop not till the goal is reached (from Veda).

• Anything that makes you weak physically, intellectually and spiritually, reject as poison.

• Take up one idea. Make that one idea your life, think of it, dream of it, live on that idea. This is the way to success.

• Knowledge is power. And practice is key to it.

Here, Swamiji talks of ideas that ignite a man’s mind. It could be political, spiritual, social or economical. Swamiji’s words show us the way to success. Probably, all our politicians during the British rule, from Gandhiji, Savarkar, Subhas Chandra Bose and many patriots and freedom fighters were inspired by the preachings of Swamiji.

We must also remember of the four paths for our salvation namely, Jnana Marga, Bhakti Marga, Yoga Marga and Karma Marga. He gave special stress on Karma Marga, Path of Duty, for Political and Spiritual salvation. I think Swamiji had our country’s freedom in mind when he made this visionary statement.