Home » Columns » Abracadabra By K. B. Ganapathy » Swami Vivekananda’s vision for future of India, as I understand -2 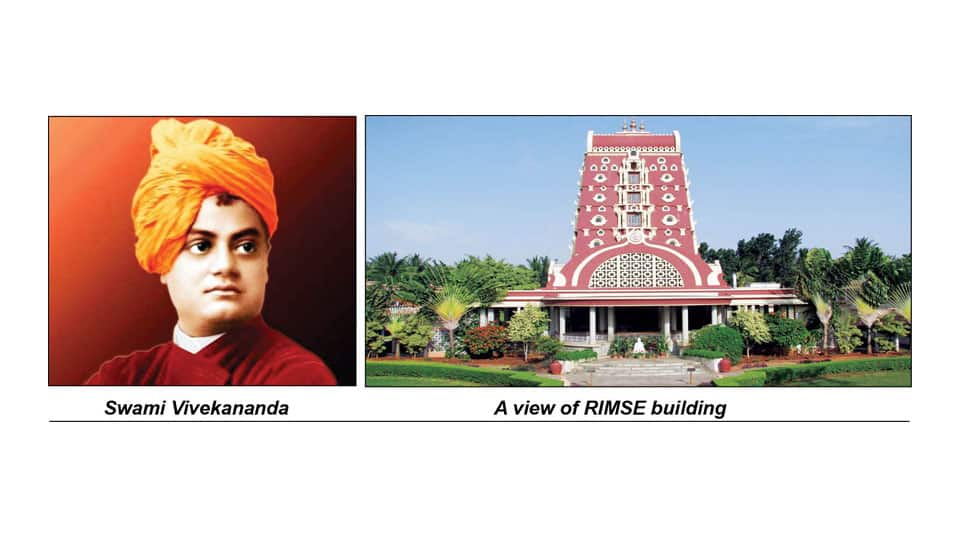 Swami Vivekananda’s vision for future of India, as I understand -2

Swami Vivekananda said: “Let New India arise….. Let her arise out of the peasant’s cottage….., out of the huts of the fisherman, the cobbler and the sweeper. Let her emanate from the factory, from marts and from the markets and from groves and forests, from hills and mountains.”

Can we not interpret this call as a call for all those people to unite, awake and arise to achieve the goal — a New India, free India? I think that was his inner voice speaking. Only, we must have understood its hidden meaning and acted.

And, of course, there were many freedom fighters who were inspired by this Hindu monk whose vision was a New India, a free India and a spiritually enlightened India to make it a Vishwa Guru. No wonder, Subhas Chandra Bose called Swamiji as the ‘maker of modern India.’ We hear our leaders talking about India becoming a Viswa Guru in the near future. I guess it is possible. Look at the famous names of Western thinkers, theologians and philosophers who were deeply influenced by our ancient scriptures and epics.

Yes, Swamiji did not leave behind a Charter, like Magna Carta, nor left a Vision Statement for developing the future India. But there is much to infer about his vision for future India from his talks, letters and activities.

He was a dreamer, rationalist and a realist. He recognised what is real or possible in a particular situation of human life. We find this in his deep concern for the teeming millions of poor in the British India whom he called Daridra Narayana (ದರಿದ್ರ ನಾರಾಯಣ) meaning Deprived God, if I may translate it so.

He was much disturbed at their plight and must have observed their lack of faith in spiritualism or religion from where one can derive hope, solace and moral strength to face life.

Therefore, he told his followers to take God to these deprived people through their stomach. By providing them food first, before taking religion to them. Reason was, there was no greater God than food. In Kannada language we say “ಅನ್ನ ದೇವರ ಮುಂದೆ ಇನ್ನು ದೇವರುಂಟೆ?”

It is, therefore, understandable why the great Hindu Saint Adi Shankaracharya declared “Annam Brahmam.” Food is God. If Jesus Christ had said that ‘man does not live by bread alone but also by the word of God,’ Swami Vivekananda had a different take on it. Swamiji said, ‘Man lives by bread. Therefore, first feed the man so that he may live, thereafter take him to God. He will then accept God and live by God’s words’. Both said the same idea but differently.

He predicted that India would be free in 50 years, as I told you earlier. He also predicted about India rising to great heights. Swamiji said ancient India was great politically and spiritually, but the future India would be far more greater, it would become Vishwa Guru, politically, economically and spiritually. And, he said India would once again be a “Punya Bhoomi.” A land of purity, peace, prosperity, non-violence and truthfulness. In one word, a land of Dharma. That was his vision for India.

There is also a third prediction he made which is rather curious. He said proletariat, serfs, Sudhras would rule Russia, China and India.

Yes, it happened with Russia in 1917, with China in 1949. But in India it did not happen though we got freedom in 1947. Of course, later in West Bengal and Kerala it happened. But being a Welfare State under democracy, we can say, Swamiji’s prediction in this regard also has become true.

His two important visions for India of the future can be found in what he had to say about women and the evil of social order based on caste system. He says that in women we see the manifestation of the Force known as Shakti, strength. Our ancient scriptures say that Gods bless those families where women are happy and well-treated. Therefore, educate them as in western countries, make them free and energetic. This in short was Swamiji’s vision for women of our country. As for caste restriction, he says, primarily it is grinding the poor. It must go, no matter what it takes, he said.

Sadly today, because of our electoral politics, caste is used for political, social and economic benefits. Hitherto unknown castes, castes that had already merged in the mainstream of our society, are dug out and revived as if to perpetuate this pernicious caste system for selfish interest at the cost of the national interest. It might be suicidal for the unity of Hindus and the country.

And it is my perception that people who follow Hindu religion will never be united as long as caste plays a role in every activity of a Hindu’s life.

According to Swamiji, our nation was totally lacking in the faculty of organisation because of caste division and as a result very difficult to make a Common Cause for anything, including freedom, by Hindus. No wonder, foreign invaders found it easy to enslave the people of this country.

And today we have insiders, like inside traders in the stock market, to do what the invaders did to this country, wounding its civilisation and leaving the festering wound even to this day.

For the same reason, at the time of freedom, United India, Akhanda Bharat, could not be made a ‘Common Cause’ by the Hindus of this land.

We may not be able to reclaim or undo the history; but we should reclaim our lost heritage, civilisation and culture. The reason is that they are based on our scriptures like Veda, Upanishad, Puranas, our glorious epics like Ramayana and Mahabharata. We must endeavour to achieve this goal of Swami Vivekananda in a peaceful, legal way or through reconciliation among the people of different race, religion and caste.

Brothers and sisters, these are the vision of Swami Vivekananda for the future of our country as I have gleaned from books. Now let me conclude with Swamiji’s meaningful words for the development of our country today.

“Trust not the so-called rich, they are more dead than alive. The hope lies in you — in the meek, the lonely but the faithful.” Here please mark the word “Faithful”. Be faithful to yourself and to the country. Surely, Swami Vivekananda’s vision for future India would be realised.

And finally before I say enough for now, let me strongly recommend a book titled ‘Indian Culture’ by Dr. S. Srikanta Sastri in Kannada and English. It is about Indian History, Culture and Heritage. There in the timeline of cultural evolution, the year 10,000 BC, is mentioned as the dawn of vedic age. Significantly it also mentions 1800-1857 as the milestone when Ramakrishna Paramahamsa and Swami Vivekananda were born giving an impetus to our cultural evolution.

So like the monks of Ramakrishna Ashram and Mutt, who are the foot-soldiers of Swami Vivekananda, let us become Swamiji’s foot-soldiers and help in realising his vision.

3 COMMENTS ON THIS POST To “Swami Vivekananda’s vision for future of India, as I understand -2”