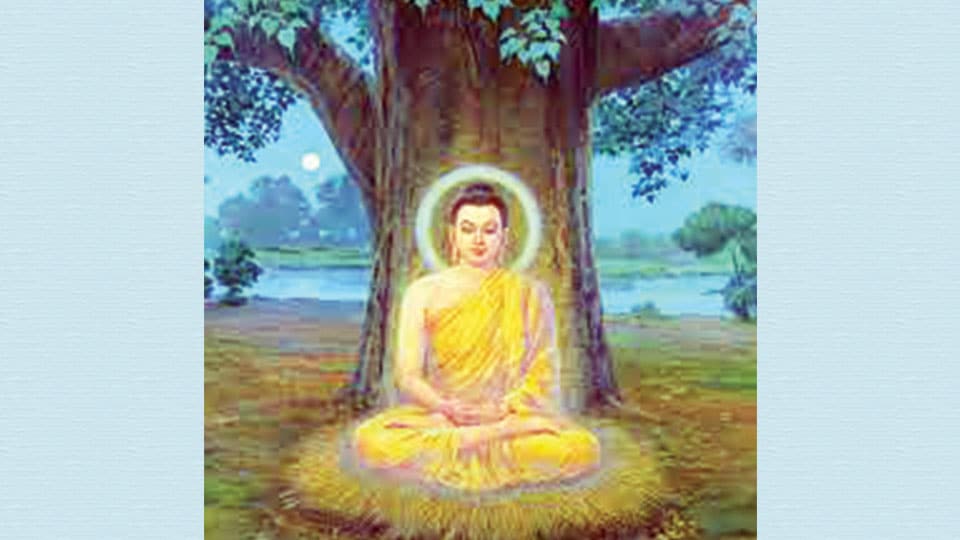 Last week I was reading an unlikely bilingual book on Buddha’s discourses titled “Sutta Sangaho.” Pages on the left is in Pali using English script while on the right is in English. It has 27 suttams (discourses) rather short ones. It covers selected discourses from the Buddha’s 45 years of mission spreading his message of truth.

Bhadantacariya Buddhaghosa wrote the famous world classic on Theravada Buddhism known as Visuddhimagga (The Path of Purification). He was sent to Ceylon in 412 BC to bring back the commentaries of the Pali Tripitika which was handed over by the son of Emperor Ashoka and preserved in Ceylon (Sri Lanka).

Be that as it may, the book contains discourses dealing with varieties of human situations. It could be spiritual or non-spiritual that a person should face. It also mentions of four types of human beings, whose conduct and lifestyle reveal the levels of their spiritual growth and maturity. They are:

1. One who promotes neither one’s own good nor of others’ good.

2. One who promotes others good but his own.

Just an ego-booster — boosting his own ego.

3. One who promotes one’s own good but not others.

A better person compared to the two above.

4. One who promotes both one’s own good as well as others.

The best of the above three types of human beings.

If life is a journey from an imperfect state to ultimate perfection, one must be the fourth type of a person mentioned above. Anyway, out of 27 discourses, many of them are not profound or related to today’s life. May be, I am incapable of comprehending them. Let me mention here a few of them in a concise manner.

By the way, Buddha is addressed by his disciples in many revered ways. Some of them are: The Blessed One, Thathagata, Lord, Bhagavan Buddha, Enlightened One, Master, Gotama, Perfect One.

The first discourse in the book is quite an abstract one. The Blessed One was staying in a Monastery — the name, place, in fact the full address of the Monastery is given. Probably, if a researcher wants he can go to the root with some effort, of course. After all, the root is about 1,600 years old !

READ ALSO  The Rotary Journey: To S. Korea and Japan —2

In the night, a certain deity “with excelling effulgence illuminating the entire Jeta-Garden” appeared before Buddha and asked: There is tangle. When there is tangle without… who can disentangle the tangle?

Answer from Buddha: If the Monk develops higher consciousness and insight, the Monk alone disentangles the tangle.

Well, I am still like the fly in the spider’s web! Let it be.

In these days of increased longevity of human beings (due to quality of life and medical intervention) there are children who may consider their old parents or sick parents a burden. Here is Buddha’s discourse: For two persons, there is no repaying, so I declare, O, Monks: Which two?

Mother and Father. Buddha then expands on the subject. A reminder to children who ignore their parents and parcel them to Old Age Homes!

Chapter 7 is about revilings. Criticising with angry insults. One Bharadwaja, an abusive Brahmin, heard Buddha was  staying at Rajagaha. He had become a Monk under Monk Gotama. He was angry and unhappy. He went to Buddha and began to abuse and criticise Buddha in foul and harsh words.

Bharadwaja answered: Yes, revered Gotama, sometimes friends and others do visit me.

Buddha: Do you not offer them snacks or food or titbits?

Bharadwaja: Sometimes I do offer.

Buddha: But, Brahmin, if they do not accept it, who gets it?

Bharadwaja: Revered Gotama, if they do not accept it, I get it back.

Buddha: Even so, Brahmin, you are abusing us, while we do not abuse you… This coming from you we are not accepting. Therefore, Brahmin, you alone get these abuses, quarrelling back. All these belong to you.

Buddha, further said: “Where is anger for one freed from anger… Repay anger in kindness. It promotes well-         being of both.”

In fact, Buddha’s journey into Buddhahood begins with these realities he encounters as a young Prince, pampered by his parents. His deserting the Palace, abandoning his wife and son just to unravel the mysteries of infirmities and death that embrace human life.

2. I am subject to disease.

4. I am subject to change in and separation from all that are dear to and cherished by me.

5. I am subjected to the ownership of my action. Success, failure, happiness and sorrow.

Therefore, reflect upon it over and over again both the lay persons and the Monks in Monastic Order.

Here I must recall about my question to Swami Nityananda of Bidadi who had come as a main speaker at a function at the Nadabrahma auditorium in city. I presided over the function. As the venerable young Swamiji walked to the podium to address, I got up and sought his and of the audience’s indulgence to ask a question, so that Swamiji could answer it in his discourse. The question was: Gotama Buddha left the Palace in search of answers to his questions about sickness, old age and death. But even after getting enlightened and becoming the Buddha, we do not have a solution. If there was one, what is it? If not, why?

Nityananda  simply ignored the question and I did not pursue.