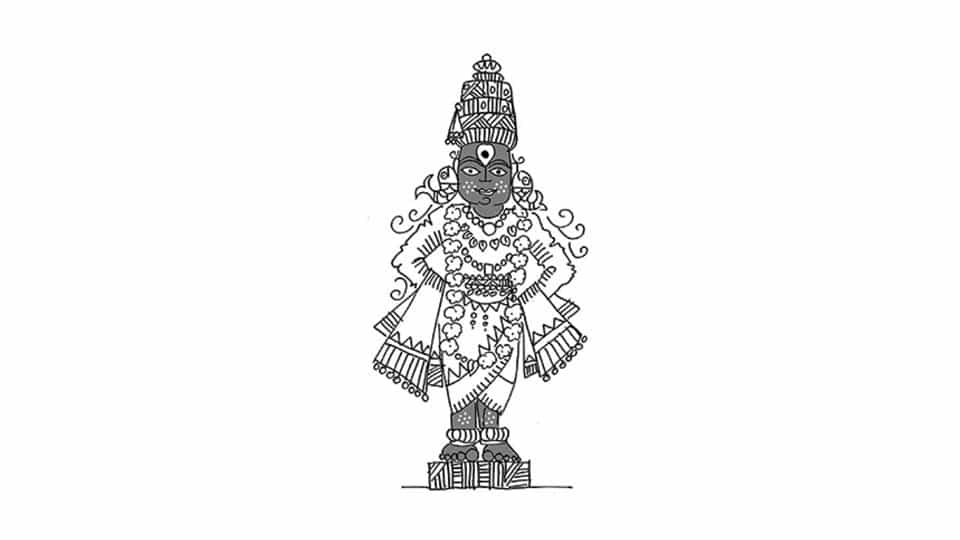 Once upon a time, Vishnu came looking for his wife, Lakshmi, who left their house after a fight. During his search, he took residence in a termite hill under a tamarind tree. A cowherd came and gave him milk there. So he made that place his home, comforting devotees, assuring them that he will not let them drown in the ‘ocean of existence’. Where is this story from?

If you are from Andhra or Tamil Nadu, you are likely to say, Tirupati Balaji of Venkatachalam. If you’re from Maharashtra or Karnataka, you will say, Vitthala of Pandharpur. Both these deities were important in the Vijayanagar Empire in the 15th Century. The former was revered near the kingdom’s southern borders and the latter near the kingdom’s northern borders. Both these Gods are identified with Vishnu, especially his cowherd form Krishna. Neither have weapons in the hands and both place the hand near the hip pointing to how deep the ‘ocean of existence’ actually is for those who are devotees, thus assuring people not to fear ‘drowning’.

Tirupati Balaji came to earth looking for Lakshmi who had left Vaikuntha in a huff when she witnessed sage Bhrigu kicking her husband on his chest and, instead of taking offence, Vishnu had apologised for annoying the sage. She came to Bhu-loka (earth) and Vishnu followed her. In the course of looking for her, he took residence in Venkatachala as the seven hills reminded him of the seven hoods of serpent, Sesha. The termite hill reminded him of Kaushalya/Devaki and the tamarind tree reminded him of Dashratha/Vasudev. He stayed with her in the company of devotees, who helped him by providing food, and by helping him repay his debt to Kubera, the God of wealth, who extended Vishnu a loan so that he could marry a local Princess, Padmavati.

Vitthala came to Pandharpur after Rukmini left Dwarka in a huff when she witnessed Krishna meeting Radha secretly. She took residence in a tamarind forest nearby. Here, she is often called an angry Goddess, Padubai, who untied her hair and hid her face in the earth. Padubai is the local variant of the name Padmavati, which was the name of Tirupati Balaji’s local consort in Venkatachalam, and another name for Lakshmi.

These stories, from local lore or sthala-puranas, connect local deities to pan-Hindu Puranic deities such as Shiva and Vishnu. Scholars such as R.C. Dhere have collected them and pointed to patterns of similarities and they reveal how Brahmin culture spread across India, along with Buddhism and Jainism, all of which arose in the Gangetic plains nearly 2,500 years ago. These stories emerge roughly 1,000 years ago.

In Odisha, for example, in the 14th Century, you have the first reference of the deity Jagannath. He is identified with Krishna in Sarala Das’ Mahabharata. Shortly after that, the Odia Ramayana connects the local deity Jagannath with Ram. The sthala purana admits that Jagannath was a tribal deity, whose caretakers were Savaras and Vidyapati, the Minister of a local king, Indradyumna, who managed to get access to this deity. However, the primal form, Nila Madhav, disappeared, and the form we have today is a later form, a wooden casing, which contains a secret essence, probably the remains of Krishna, a reminder of how Buddhists preserved relics of Buddha. Like Vitthala and Venkatesha, Jagannath also has fights with his wife. When he returns from his annual Ratha-yatra, Lakshmi does not let him enter the temple as he went on a chariot ride with his sister, Subhadra, leaving her behind. Jagannath has to appease her with offerings of sweets such as the Rasagulla.

These stories of appeasing Goddesses — of connections with local tribals and herding communities, tamarind trees, termite hills, and assurance of love and protection — indicate how local ‘desi’ deities were gradually made part of a wider universal ‘margi’ mythology.