Home » Columns » Abracadabra By K. B. Ganapathy » Of Linguistic Pride and Prejudice: H.D. Kumaraswamy, Chief Minister, has a point 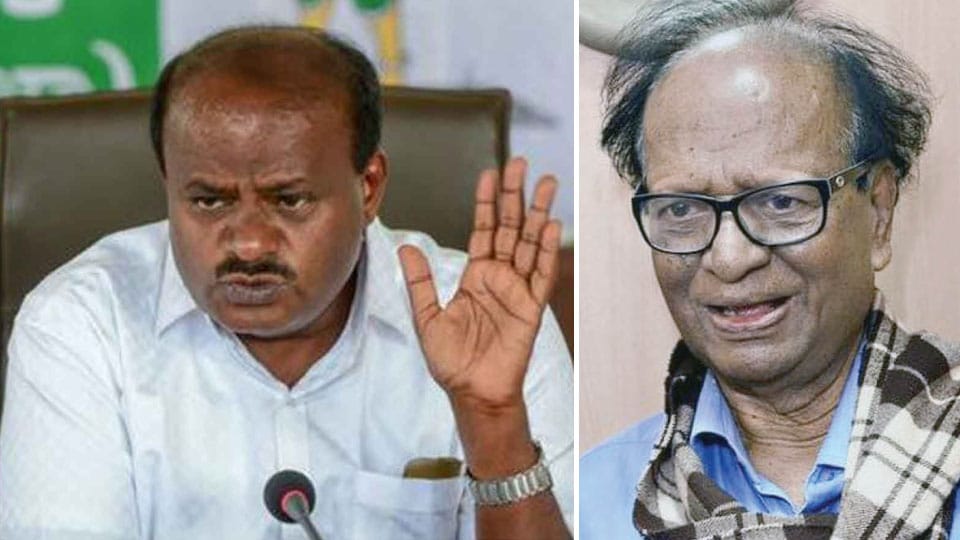 Of Linguistic Pride and Prejudice: H.D. Kumaraswamy, Chief Minister, has a point

This morning, while I was walking in the park an elderly woman, who apparently knew who I was, hesitantly asked if she could speak to me. As is my , I smiled and said in  Kannada, “Mathadamma” (please speak).

She wanted me to recommend her daughter, a small-time beautician, for a job in a big-time Ayurvedic Centre near my house that had advertised the job. She said, her daughter had got through the practicals at the interview, and at the final interview, before the owner and an officer, she failed. The reason was that she did not know English beyond, “Yes Sir”, “No Sir”, “Sorry Sir” and “Thank You Sir”. Because she did so well in the practicals, the owner asked her at least if she knew Butler English.

Having not heard this phrase, the girl went blank in the face and innocently asked, quivering all over the body, “Yenadu Sir” (What is it Sir?). The elderly woman told me that she did not get the job because she did not know English and she wanted me to speak to the owner saying her daughter would learn english on the job and simultaneously take tuition to learn English.

At present she is paid Rs. 200 per day and to supplement this meagre salary, her daughter went to private houses for facials, threading, etc. The salary offered at the Ayurvedic Hospital was Rs. 10,000… She lost the job all because she did not even know Butler English. I did not have a heart to disappoint that lady early in the morning, so, I gave her “hope” like our politicians.

When I returned home, I picked up this morning’s The Hindu newspaper and as if by a fine coincidence, I found a front page four-column news item titled, “At Kannada Sahitya Sammelana, HDK defends English medium.” The sub-headline was eloquent in its humanism. It read: “Not right to deprive any child of quality education in the guise of linguistic pride.”

Reading this and the text of what Chief Minister H.D. Kumaraswamy  spoke, I remembered a Kannada proverb which would apply very well to those Kannada fanatics (Not Kannada Lovers and Admirers) —  Hottege Hittilla… Juttige Mallige Hoovu (No food for stomach but jasmine flowers for head).

Among the Chief Ministers I have seen in the last forty years, I found only two to be true to their conscience. One was D. Devaraja Urs and another H.D. Kumaraswamy. Even between the two, though Kumaraswamy may seem a bit rustic, he is more frank, transparent and down to earth.

Now, let me quote here what Kumaraswamy said, in response to the earlier speaker Chandrashekar Patil (Champa) who was the previous President of Akhila Bharatha Kannada Sahitya Sammelana, defending his government’s decision to introduce English medium in 1,000 Government schools. He said that the decision was taken keeping in mind the future of children from the underprivileged sections. The elderly lady I met this morning, that I mentioned above, belongs to this underprivileged section.

He said while he was committed to protecting and promoting Kannada as a language, he would also have to consider the “future of the children” — the future of the daughter of the elderly woman I met this morning at the park.

Kumaraswamy also made a most important and pertinent point which touches upon equality of all citizens and their fundamental right to get education without discrimination.

Here is the most defining argument by Chief Minister H.D. Kumaraswamy: “Several youths, especially those from the backward areas of the State, are failing to get jobs…. it is not right to deprive any child from accessing quality education in the guise of linguistic pride…”

This is some food for thought to those whose stomachs are full.

7 COMMENTS ON THIS POST To “Of Linguistic Pride and Prejudice: H.D. Kumaraswamy, Chief Minister, has a point”