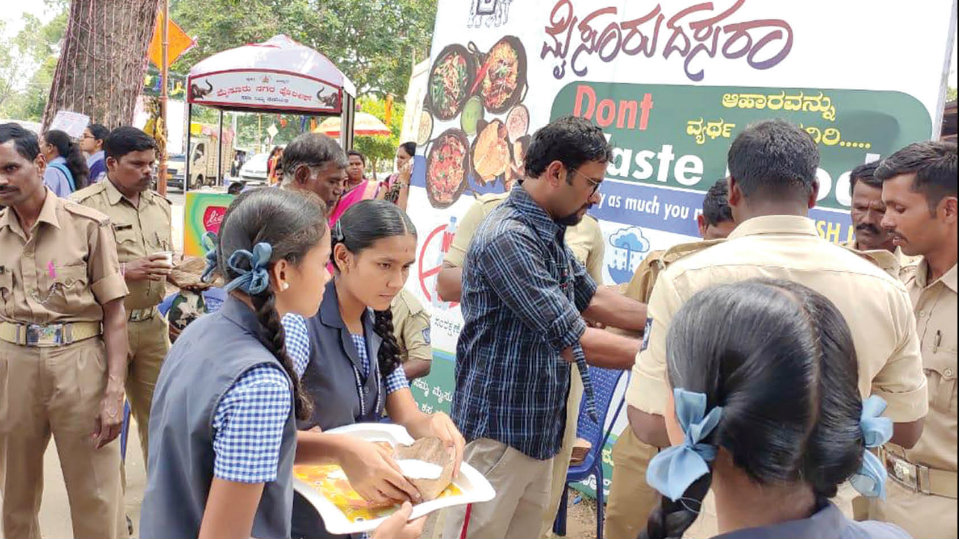 Mysuru:  This Dasara, an unprecedented 10,000 Policemen were on security duty and most of them were drawn from outside Mysuru district who were unfamiliar about the presence of hotels and eateries to satiate their hunger.

Though the Police Department had provided food and accommodation to the Policemen at various Kalyana Mantaps, Police accommodation centres and other halls in city, there was a desperate need to provide them food and water while they were on day-long and night-long Dasara duty. This is the time when other sources of food are not available and also they could not leave their place of duty to have food.

Many Policemen were seen standing clueless on where to go to have food or a quick snack. Some of them were seen eating bananas and filling their hungry tummies. Realising this need, Rotary Mysore Midtown Academy School pitched in and supplied food for over 600 Policemen who were on duty at various places.

Food to the place of duty

The Interact Group of the Rotary Mysore Midtown Academy School took the initiative of supplying food to the place where the Policemen were on duty. The Group has been doing such work since the last three years and this year, food was supplied to over 600 duty-bound men and women and also Home Guards.

Ramya Urs, Head Mistress of Rotary Mysore Midtown Academy School, said that this year, 15 kgs of vegetable pulao, 5 kgs of curd rice and 20 litres of buttermilk were supplied. “Interactors took the initiative from purchasing of bulk vegetables from the market, cooking and distribution of items and over 20 to 25 students from Class 7, 8 and 10 took part under the leadership of seven to eight teachers,” she said. Plastic bottles were avoided to be environmentally friendly.

Venues like Aahara Mela, Maharaja’s College Grounds, Palace, Kuppanna Park Flower Show and K.R. Circle were covered in the initiative. Food was brought to the places where the Policemen were standing in groups and was served to them. Not only this. A couple of students were also involved in collecting waste containers and glasses after the Policemen had food. This ensured that the place is not littered with discarded waste, Ramya added.

Rtn. A.N. Aiyanna, President-Elect, Rotary Mysore Midtown told Star of Mysore that the team coordinated with the Office of the City Police Commissioner to supply food. “The initiative was on the fifth day of Dasara and the Commissioner’s office provided us directions on where to provide food and where there was more concentration of Policemen and Home Guards. Accordingly, our school bus was taken there and food was supplied. We even collected the waste cups and containers,” he said.

On the response of Policemen, Aiyanna said that the Policemen were happy to see food arriving at their places. “Some of them were literally in tears seeing food as they were very hungry and had no place to go. They blessed the children and spent some time with them asking them about their studies and their schools,” he added.

Next Dasara, Rotary Mysore Midtown plans to have the food distribution to be a three-day event covering more than 3,000 Policemen and women. “We will coordinate with other Rotary Clubs to join us in the initiative and do it in a mega scale,” Aiyanna revealed.