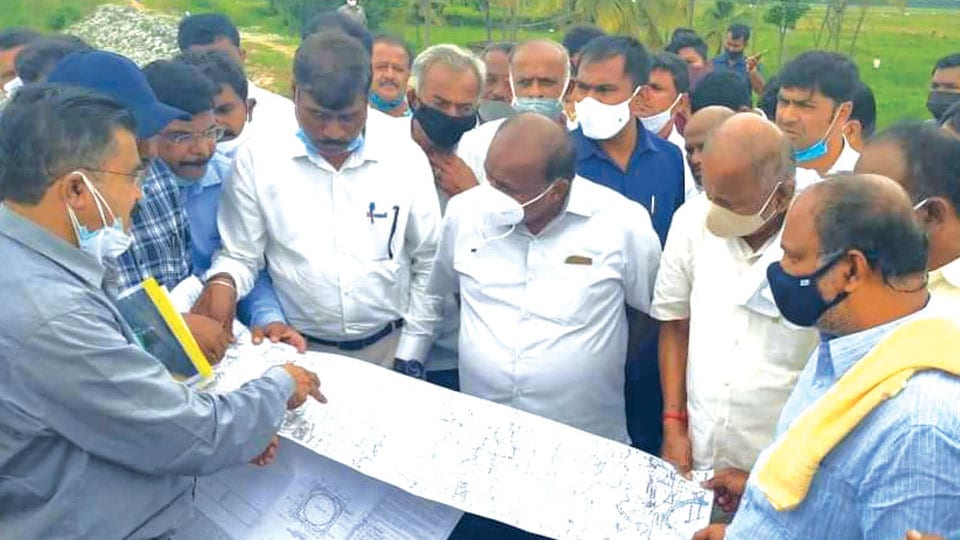 Malavalli: Former Chief Minister and JD(S) leader H.D. Kumaraswamy (HDK) has questioned the need for giving clearance to development works worth Rs. 12,000 crore when the incumbent CM B.S. Yediyurappa is expected to step down within two days.

Speaking to reporters on Thursday after reviewing Rs. 540 crore worth tunnel-based drinking water project at Sathegala here, which will provide drinking water to several taluks, he said “I don’t know about Yediyurappa tendering resignation to CM post but he is busy in clearing projects worth crores of rupees in a hurry. The works worth Rs. 12,000 crore pertaining to four divisions in Water Resources Department have been given clearance in Thursday’s meeting. Out of Rs. 12,000 crore, only Rs.1,000 crore has been given to Cauvery Neeravari Nigam.

A majority of revenue goes to the State Treasury from South Karnataka but only a meagre fund allocation has been made. “I am not questioning about Old Karnataka or New Karnataka but only demanding a good share of funds for this region too,” he said.

The former CM sought to know what injustice these people have done to the ruling party. Has the Government ever planned projects aimed at providing drinking water to people? What was the necessity to give clearance for so many projects at one stroke and what was the reason behind it? Is it because the current CM will step down within two days?

On Lingayat Seers extending open support to Yediyurappa, Kumaraswamy said that he would not like to add much importance to it. “I will not take refuge under my caste. This is the difference between me and other politicians. I am not going to build my party on caste basis. Everyone has his own feeling and people will decide whether it is right or wrong. The change of CM has been going on in BJP for almost two years. I suggest the BJP High Command to resolve this matter at the earliest.”

He said, the scheme to fill up Iggalur Dam from River Shimsha was okayed during his Government and foundation had been laid for this project. The work is expected to be completed within the stipulated time. Since there is no chance of bringing water to Ramanagar district from any part, filling up of tanks and providing Cauvery water are the highlights of this project. This will benefit Maddur and Malavalli Assembly segments, Kumaraswamy said.