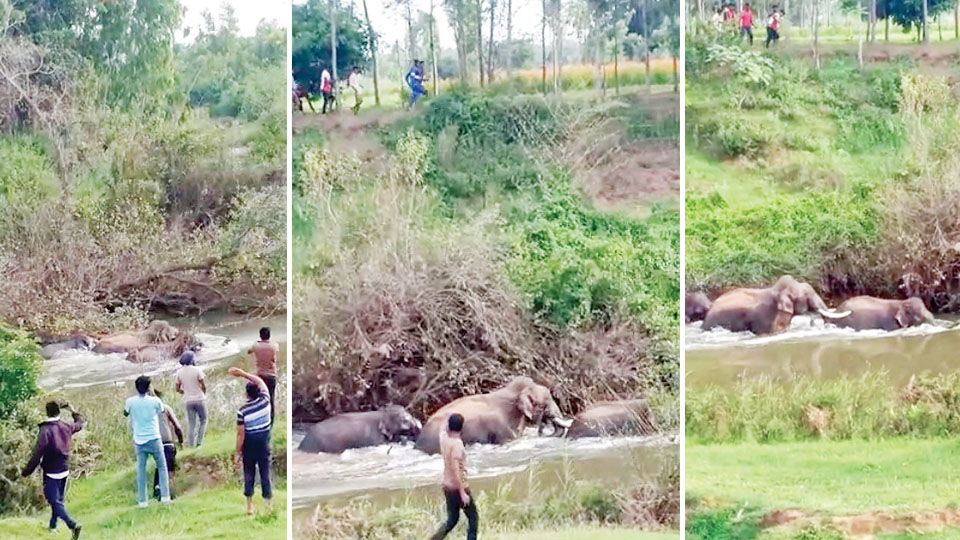 Hunsur: Three wild elephants that had accidentally strayed into human habitat, had to face the wrath of villagers, who, not only blocked the elephants’ escape route, but also pelted big stones on the already scared animals.

The incident took place near Hale Panjalli and finally, the Forest Department personnel managed to drive the scared elephants back to the forest.

On Friday night, three wild elephants that had strayed into the human habitat from Veeranahosahalli Forest Range in Nagarahole National Park had eaten away the crops. The next day morning, the elephants, unable to go back into the forest, had stayed put in Lakshmanatheertha River.

Villagers, on hearing the news of the three elephants that had destroyed their crops, had stayed put in the river, assembled on the river bank on either sides in large numbers, began to shout and scare the pachyderms besides pelting big stones on them. Though the elephants tried to escape from being pelted with stones, the villagers followed them by shouting and pelting stones on them continuously. Unable to escape, the scared elephants were seen trumpeting and wandering in the river.

Though Veeranahosahalli Range Forest Officer (RFO) Naman Narayana Naika and other Forest Department staff made efforts to drive the elephants back to the forest, the elephants were unable to get out of the river as the escape route was blocked by the villagers, who were still shouting and making noises, thus scaring the elephants further.

Finally, Rural Police Inspector Chikkaswamy and staff arrived at the spot and dispersed the crowd. It was only then the Forest staff opened fire in the air and burst crackers. The elephants then returned to the forest via Tibetan camp at Gurupura.

Inspector Chikkaswamy managed to convince villagers and RFO Naman Narayana Naika assured the villagers of getting them adequate compensation for their loss. It was only then the villagers gave way for the Forest officials’ vehicle to pass.