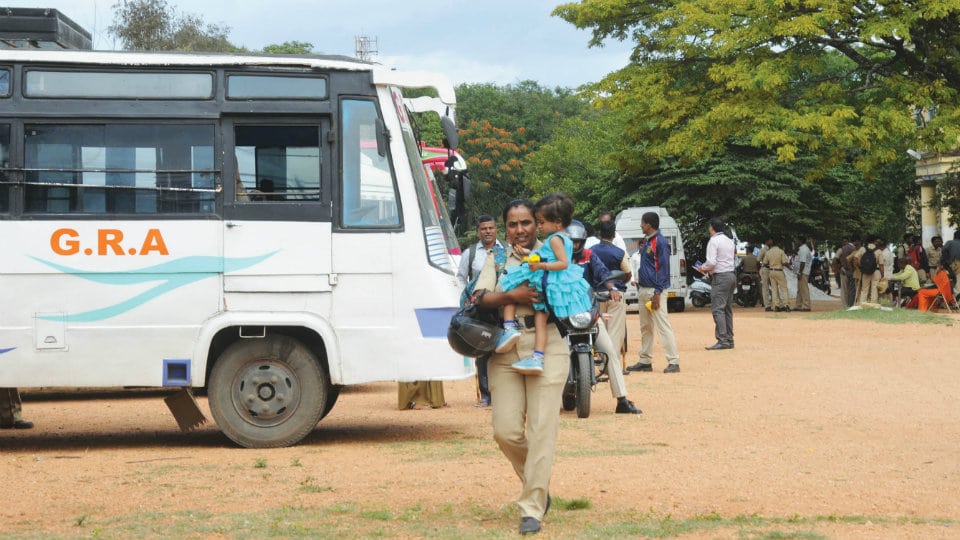 Woman Constable on poll duty with baby in arms

Mysuru: A woman Constable who is posted for the Mysuru City Corporation election duty was forced to carry her two-year-old daughter to work.

She is E. Jyothi attached to Lashkar Police Station who came with her child to the Maharani’s College Mustering centre yesterday and after finding out where she has been posted for election duty, boarded a bus along with other staff and her child.

Jyothi’s husband is also a KSRP Constable and he has also been deployed for election duty. Hence, she had no choice but to carry her child to work. However, her sister who is working in Lokayukta office, Bengaluru, as First Division Assistant, was to reach Mysuru last night to look after the child.

Jyothi has been deployed at Geetha Mandira, a polling booth right behind Lashkar Police Station.

Speaking to Star of Mysore, Jyothi said that since there was no one to look after the child at her home, she was forced to bring the baby along with her.

The senior officers are also co-operating. Tonight her sister is coming to take the child home, she added.