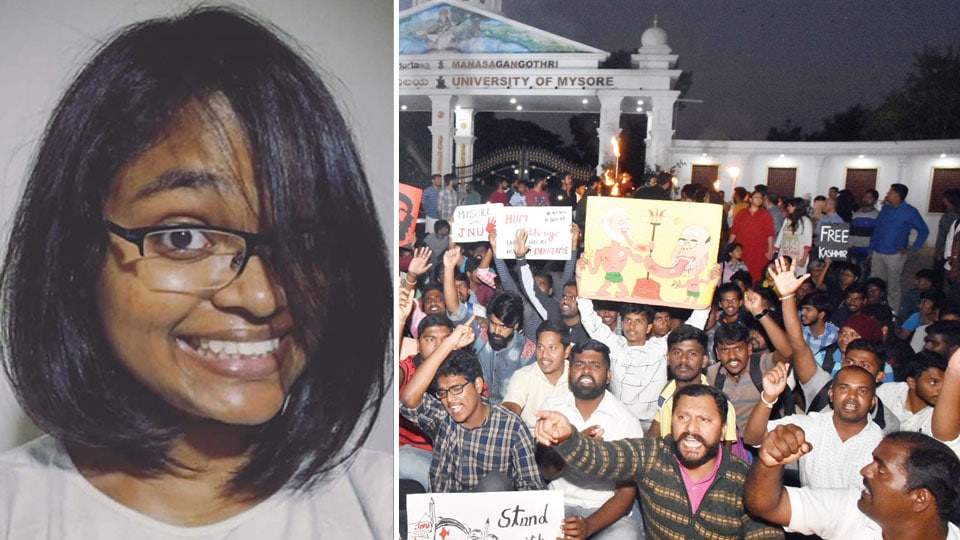 Poster was against internet blockade in Kashmir after abrogation of Article 370, she clarifies

Mysuru/Mysore: The woman who held the “Free Kashmir” controversial poster is Nalini Balakumar, a native of Tamil Nadu. She is currently residing at Ramakrishnanagar in city.

Nalini, daughter of Balakumar, a rich businessman of Tamil Nadu, is a 2016 batch Journalism degree student of the University of Mysore (UoM). She later did her Master of Design course in Photography at Gandhinagar in Gujarat and returned to Mysuru to pursue her career as a freelance photographer.

She is said to be in touch with intellectuals, women activists and other activists from several States. Reportedly a Leftist,      Nalini, is said to have shared leftist ideals and posters on anti-CAA protests, Kashmir policy and a host of other issues on Facebook and other social media networks.

In a statement issued to ‘News Minute’ portal in Bengaluru, Nalini has clarified about the poster. “I want to clarify regarding the placard ‘Free Kashmir’ that I was holding at the protest organised at the University of Mysore on January 8. I was trying to draw notice to the Internet shutdown which has been imposed in the valley through the placard. From August 5th, 2019, about 156 days since the abrogation of Article 370, there has been an internet blockade which has resulted in the silencing of Kashmir. We haven’t heard from them for 5 months and 2 days,” she said.

The statement added that it was a privilege to dissent and raise voices in protest. “I wanted to remember and remind people that coming out to the streets to protest against the unconstitutional CAA, NRC, NPR is a privilege we have. We have been able to amplify our voices against it, while the valley has been in darkness unable to voice out their dissent. This is all I meant by ‘Free Kashmir’. Nothing more, nothing less. None of the student bodies of the University of Mysore is responsible for the placard.”