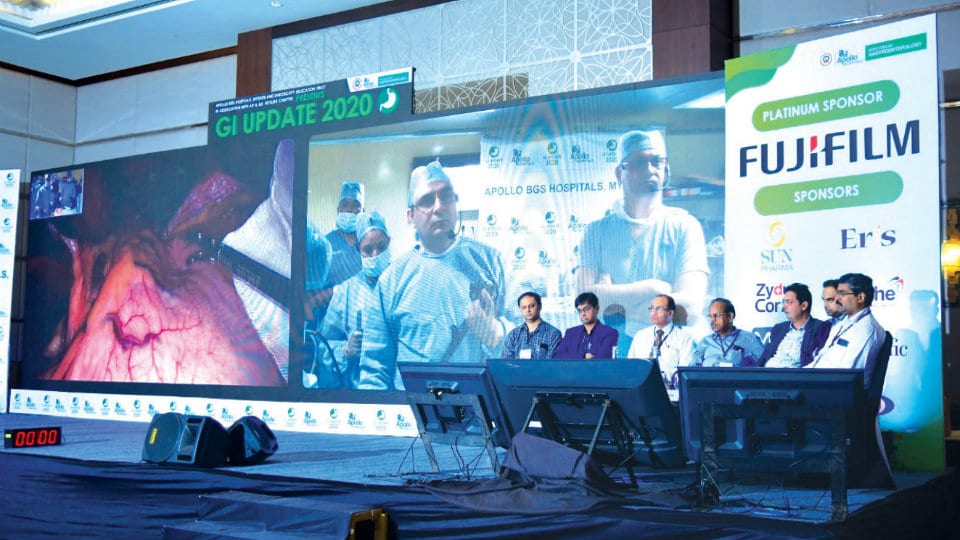 Mysore/Mysuru: A workshop on ‘Gastroenterology and Gastrointestinal Surgery: EUS 3rd space Endoscopy and Laparoscopy,’ organised as part of the second edition of ‘Gastrointestinal (GI) Update 2020’ was held in city recently. The event was conducted by Apollo BGS Hospitals, Mysuru, in association with Fujifilm India.

Dr. Rajkumar P. Wadhwa, Chief Gastroenterologist and Head of Institutes of Gastroenterology, Apollo BGS Hospitals, Mysuru, said “GI Update 2020 is the biggest international gastroenterology event which was attended by 400 plus doctors and was conducted for two days on Feb. 22 and 23. We performed major cutting edge Gastro procedures like treatment of jaundice caused by cancers and stones without any operations.

Endoscopic procedures were conducted and depicted to the delegates via Live Transmission which was the highlight of this event. Recent techniques including bleeding from the stomach which could be stopped using endoscopic techniques were showcased during the workshop.

These techniques and procedures were taught to the practitioners, physicians and to the budding doctors of Mysuru and Karnataka region along with hands-on training.”

The Conference also saw the participation of post graduates in the field of surgery and medicine from various Medical Colleges across the State.”

“The Gastroenterology Unit at our Hospital provides significant services. We are the only licensed liver transplant unit in the city of Mysuru, having performed many successful transplants so far. With this event, we are bringing the latest updates and technologies of the entire Gastro world to Mysuru which will immensely benefit city’s physicians and patients with GI problems. We look conduct many such advanced workshops in the future,” said  N. G. Bharateesha Reddy, Vice-President and Unit Head, Apollo BGS Hospitals, Mysuru.