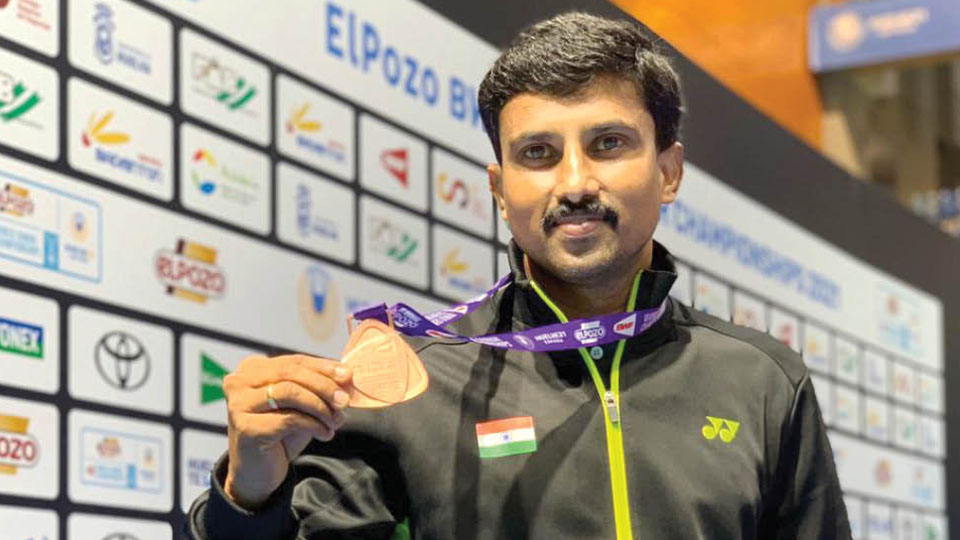 Post COVID-19 pandemic, Master Games  Association of Karnataka conducted the State Master Tournament, which was the selection Tournament for the World Masters Games which will be held at Kanasi, Japan, from May 13 to 19, 2022. Sunil Gladson Varadaraj has been selected for this tournament.

A Government School Mathematics teacher from Kollegal in Chamarajanagar has proved his calculation can never go wrong by excelling in the game he chose to take up professionally amongst all the games he had tried hands on.

Sunil Gladson Varadaraj, who works as an Assistant Teacher at Hosamalangi Government High School in Kollegal taluk of Chamarajanagar, is the one who had excelled at track & field events during school days and then was part of State Kho Kho team before switching to shuttle badminton.

Now, adding feather to his cap is the Bronze Medal he won at the Badminton World Federation (BWF) World Senior Badminton Championship held at Carolina Marin Stadium in Huelva of Spain between Nov. 28 and Dec. 4, 2021.

With this win, he becomes the first Mysurean to win a medal at BWF World Championship.

Partnering with Abhinand K. Shetty of Bengaluru, Sunil won Bronze Medal in the Men’s 40-plus Doubles category at the Tournament. In semi-finals, Sunil-Abhinand duo lost to JBS Vidyadhar-Ajit B. Umrani 10-21, 14-21.

While Tommy Sorensen-Jesper Thomsen (Denmark) bagged Gold Medal, JBS Vidyadhar-Ajit B. Umrani settled for silver. The Tournament saw participation from over 1,200 shuttlers, coming from over 23 countries, in various categories.

Earlier, Sunil had partnered with Abhinand to secure first place in 40+ Men’s Doubles in the Senior National Badminton Tournament held at Goa between Sept. 19 and 26 apart from securing first place in 35+ Mixed Doubles partnering with Radhika from Pune. This Tournament was the selection tournament for the BWF World Championship.

He first started playing at the Chamundi Club and his professional career as a shuttle badminton player began during 2007. He rose to fame when defeated India No. 3 K. Dinesh and followed it by overcoming yet another top ranked player J. James, both from Andhra Pradesh at Senior National Championship.

Even after crossing the age limit to compete in the main tournaments, Sunil has continued his passion for shuttle badminton representing the country in the Master’s Tournaments held at the national and international level.

He also has the credit of being the first male shuttle badminton player from Mysuru to represent the country in International Master’s Badminton Tournament. Sunil had emerged runner-up in the National Level Tournament held at Coimbatore in 2015.

In 2017, Sunil was part of Hyderabad Smashers team which secured Gold Medal in Indian Master League held at Hyderabad between Sept. 22 and 24.

Speaking to Star of Mysore, an elated Sunil Gladson expressed his gratitude to all those who supported him in his sports endeavour. “Firstly, I thank my family members for their support and also my Education Department, which gave me permission to take part in various tournaments. Secondly, I want to thank my sponsors Bastin Joseph (MD of Walkmate Footwear), who is helping me since 2017. Centre Court Club members and parents of my Academy students who helped me financially to take part in the tournament. Finally, I thank Gopalswamy who gave the place for my practice and for coaching in Gopalswamy Sports Arena,” he said.

A native of Mudigundam in Kollegal, Sunil resides in Mysuru and trains at Gopalswamy Sports Arena in Vijayanagar 4th Stage. Son of Varadaraj, a sericulturist and Jasmine Florance, a retired teacher, Sunil completed his graduation from Yuvaraja’s College and M.Sc, M.Ed from University of Mysore and is married to J. Prathibha, also a teacher and has a daughter, named Anica Gladson.