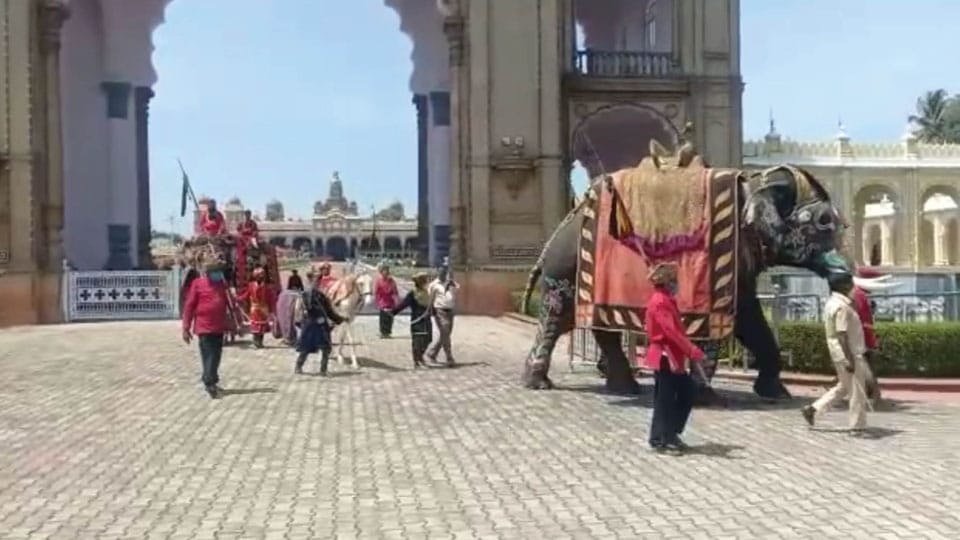 Mysore/Mysuru: Navarathri rituals at Mysore Palace began with the commencement of Khas Durbar or Private Durbar today during which titular head of Mysore Royal Family Yaduveer Krishnadatta Chamaraja Wadiyar ascended the Golden Throne at Durbar Hall at 11.45 am after performing various rituals.

Prior to this, as part of the ritual, the Lion’s head was fixed to the Golden Throne between 6.15 am and 6.30 am in Shubha Lagna.

Kankana was tied to Yaduveer between 7.45 am and 8.15 am at Chamundi Thotti and to Trishika Kumari Wadiyar, wife of Yaduveer, at Vani Vilas Puja Hall at the Palace.  The rituals at the Palace continued with Pattada Aane (Royal elephant), Pattada Kudure (Royal horse) and Pattada Hasu (Royal cow) being brought to the Palace along with  a group of married women (Sumangalis) carrying Kalashas from Kodi Someshwara Temple and Kodi Kalabhairaveshwara Temple at 10 am.

Yaduveer, in traditional King’s attire, arrived at the Durbar Hall and performed puja to the Golden Throne before ascending it at 11.45 am. While Yaduveer walked through the Durbar Hall, the durbaris present chanted ‘Bahu Parak’ to inform the Court about the arrival of the King.

Yaduveer and those present at the Durbar Hall stood in attention for the Mysore Anthem ‘Kayo Sri Gowri’ played by the Police Band.  They also played the compositions of the erstwhile Mysuru King Sri Jayachamaraja Wadiyar.

Priests from 20 temples including Chamundeshwari Temple atop Chamundi Hill, Sri Ranganathaswamy Temple in Srirangapatna and Cheluvarayaswamy Temple in Melukote, offered Prasada to Yaduveer.

2 COMMENTS ON THIS POST To “Yaduveer holds Khas Durbar”