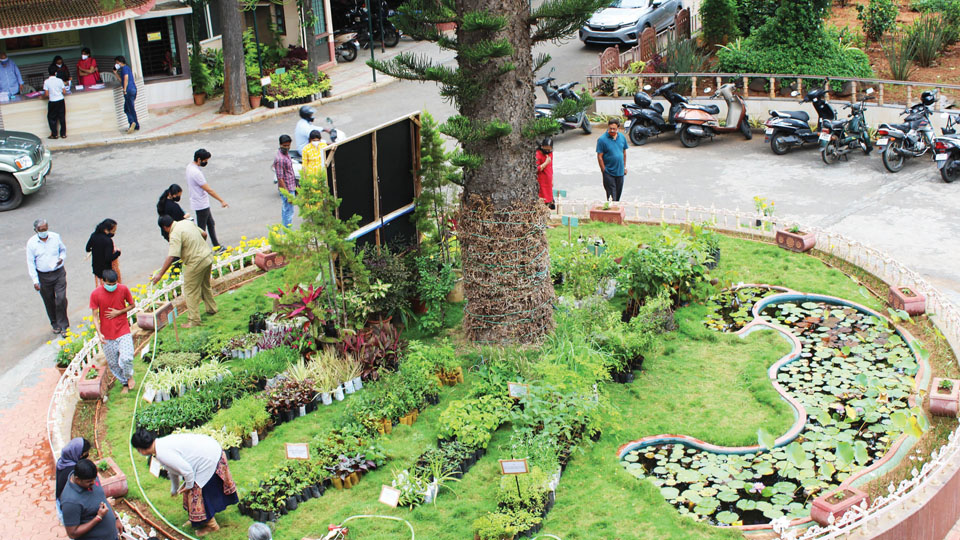 The Ashrama launched the initiative with the theme Mysuru Hasiraagirali, Viveka Namma Usiragirali, under Haccha Hasira Mysuru, Viveka Prabheya Mysuru  programme on Sept. 27 and till Oct. 15, the Ashrama has distributed over 29,200 tree saplings to more than 4,807 members of the public. At the same time, 4,200 people have been distributed Viveka Prabha and Spoorthi Kannada magazines, which explain the true values of life.

The sapling distribution drive will continue till November end and those interested can collect the saplings at Sri Ramakrishna Vidyashala in Yadavagiri, Sri Ramakrishna Ashrama on KRS Road, Viveka Memorial site at  NTM School premises on N.S. Road and Ramakrishna Vidyakendra in Ramakrishnanagar from 10 am to 12 noon and from 3 pm to 5.30 pm on all days, upon submission of personal details such as Aadhaar Card and address proof. Every individual will be given five saplings that can be planted in homes.

Sri Ramakrishna Ashrama President Swami Muktidanandaji told Star of Mysore that late Swamiji Sureshanandaji was an ardent lover of plants and the green drive was initiated in his memory. Pointing out that the 61 acre campus of Sri Ramakrishna Vidyashala in Yadavagiri, which was a barren land, now looks like a mini forest with varieties of trees and plants, many of them being rare variety, he said that such an initiative will make the people realise the importance of having greenery around us.

Urging the people to develop a habit of growing useful plants in the premises of their homes, he said that living among plants and natural surroundings will bring freshness to the mind and added that even children could learn a lot about plants as they get an opportunity to watch them closely every day.

Highlighting the importance of having a terrace garden, Swami Muktidanandaji said that it brings freshness to life and also helps in educating children about growing plants and plant culture.

Referring to the distribution of Viveka Prabha and Spoorthi magazines, he said that these books are very much educative on true values and experiences of life as propounded by Swami Vivekananda. Appreciating the co-operation extended by Bhudevi Farm located on Hunsur Road for the Ashrama’s green initiative, he thanked the public for their active participation in making the initiative a huge success.

The Ashrama is looking ahead for its centenary celebration in 2024-25 and is planning for a purposeful celebration, focussing on spirituality, peace, harmony, life values etc., he said.