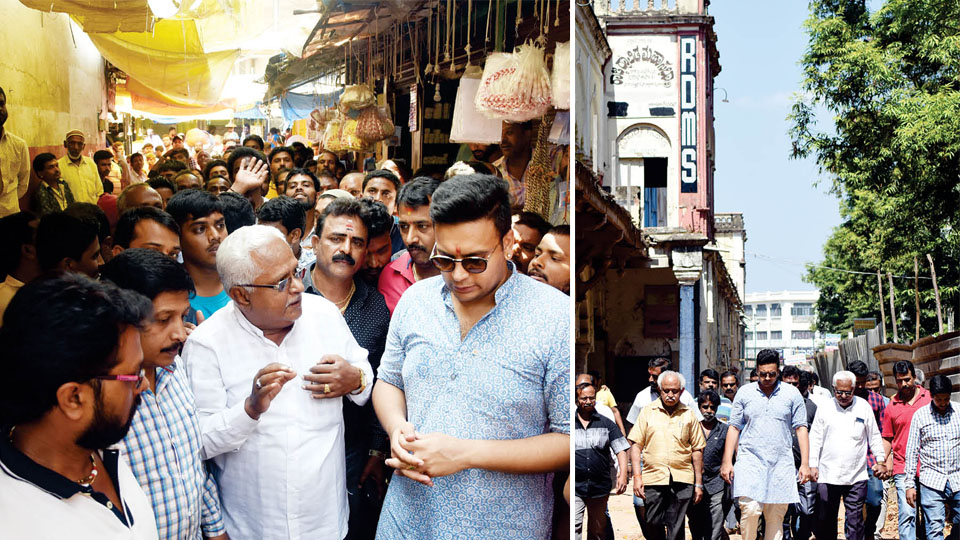 Lends support for the cause of saving both heritage structures

Mysuru: The revival of the two heritage structures — Devaraja Market and Lansdowne Building — which were to be demolished following the decision in the Mysuru City Corporation, got a boost with the titular head of Mysore Royal Family Yaduveer Krishnadatta Chamaraja Wadiyar lending his support to the beleaguered shopkeepers of both the places.

After disapproving the MCC decision, Yaduveer expressed his solidarity with the tenants by visiting Lansdowne Building and Devaraja Market buildings yesterday. The public and shopkeepers who accompanied him on his padayatra, urged him to save both the heritage structures as it was his ancestors who were responsible for their construction.

He first visited Devaraja Market around noon where he inspected the North Gate entrance of the Market which had earlier collapsed and some parts of which were demolished. He was accompanied by the President of Devaraja Market Tenants Association S. Mahadev who explained to him about the condition of the shops and their battle for preservation of the heritage market.

“The fact that the royal family has extended support to our cause is a welcome sign. He has clearly told us that heritage structures like this must not be destroyed and he will fight for the cause and try to see that the buildings are not razed,” said Mahadev.   Yaduveer, addressing the media on Monday, had said that several heritage structures in Jaipur and other cities which were on the verge of collapse were restored and are being used for commercial purposes and the same should be done with Lansdowne and Devaraja Market buildings.

Meanwhile, the Mysore Chamber of Commerce and Industry (MCCI), expressing concern over the move of the MCC to raze the structures, lent its support for the cause of retaining both the heritage buildings.

Mysuru is known worldwide for its art, culture and tourism. Added to this the many heritage structures that the city is dotted with is the major attraction for both Indian and foreign visitors. There are thousands of families depending on tourism. Hence, the decision to raze the structures stating that it is impossible to preserve them and instead build new ones in its place is not correct, the MCCI said.

The experts have maintained that the restoration of both the structures can be done and once it is completed, for the next 50 years the buildings will stand without any problems.  Officials concerned must hold a meeting with heritage experts and save both the heritage structures, said MCCI Secretary Satish in a press release.