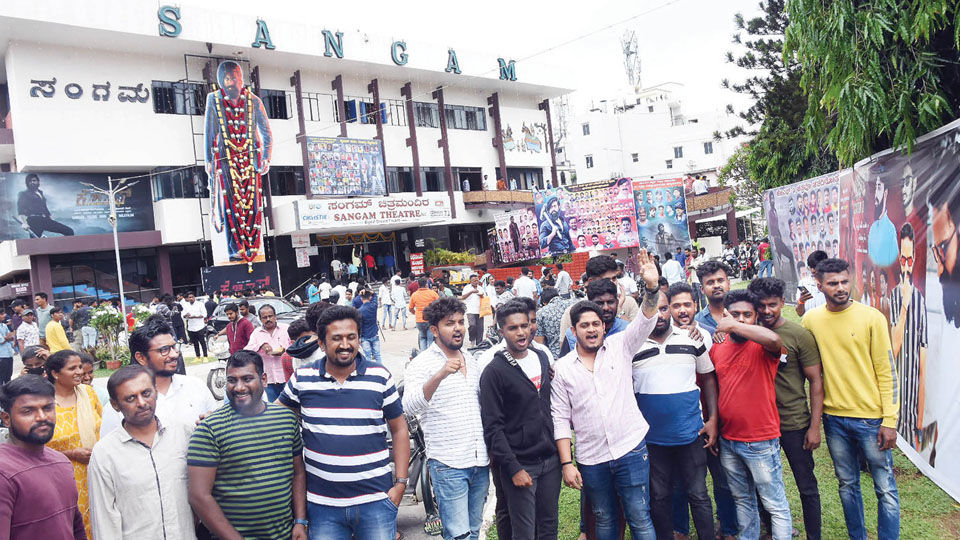 Mysore/Mysuru: One of the most-anticipated movies of the year, ‘KGF Chapter 2’ was released this morning and Mysuru boy Yash aka ‘Rocky Bhai’ is back with the second instalment and set the theatres on fire. The sequel, directed by Prashanth Neel, joined the record-breaking success of ‘KGF Chapter 1’ as the film is receiving a humongous response from audiences as well as critics.

As advance booking has been record-breaking, many are predicting it to become the biggest Indian opener ever. The movie is being screened in more than 10,000 theatres worldwide. In Mysuru, the movie received an overwhelming response after Dr. Puneeth Rajkumar’s ‘James’ and the movie is being screened in Sangam, Woodlands, Rajkamal, Sterling and Mahadeshwara theatres and at all multiplexes — DRC Cinemas, PVR Cinemas, Inox and Mysuru Vision Cinemas.

Till Saturday, there are 100 percent bookings across the single screens and multiplexes and in DRC alone, there are 80 to 85 percent bookings (till today noon) for the Friday, Saturday and Sunday shows. All the theatres are arranging for more shows with packed schedules to cater to the crowd demands.

Arrangements have been made to book tickets in both online and offline mode and movie-goers are booking tickets in bulk for the weekends. Next week too there is likely to be a similar rush.

“Reviews in print or online medium and comments by movie-goers on social media platforms will go a long way in drawing people to theatres to watch movies. As of now, the response is great and we will wait for the word to spread to see the real response to the movie,” Gayathri Talkies owner M.R. Rajaram, who is also the Vice-President of Karnataka Film Exhibitors Federation, told Star of Mysore.

DRC Cinemas’ Proprietor Vaishali Hanumanth said that the response has been very good and they are increasing the number of shows. “While ‘James’ gave a much-needed boost for the struggling cinema industry and theatres in the wake of the two-year COVID pandemic, ‘KGF Chapter 2’ has continued the momentum,” she added.

Meanwhile, KGF is gearing up for the third chapter as the makers treated the audience who came to watch the movie with a huge surprise as they hinted at a possible third chapter in the end credits. The audiences are going berserk ever since this news came out and are taking the internet by storm.