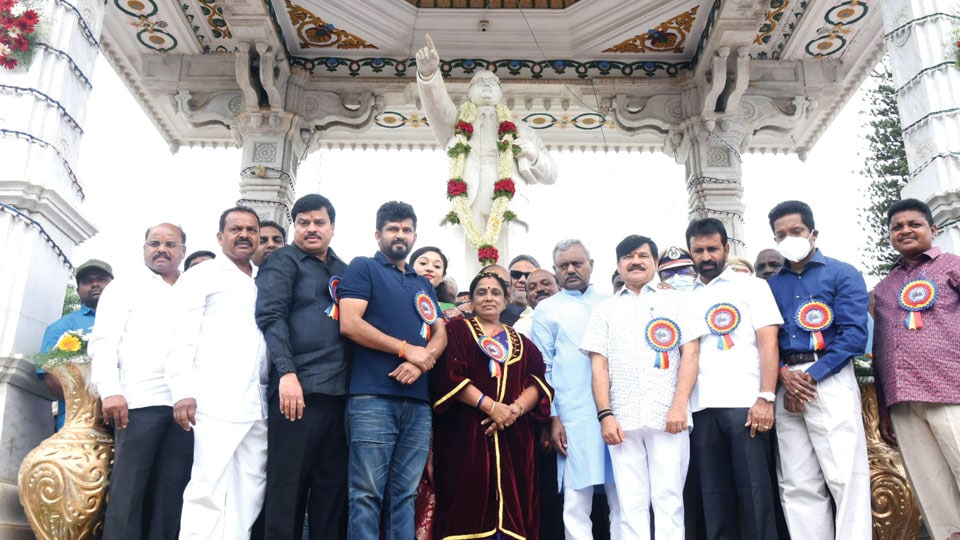 A grand procession, accompanied by a host of folk and cultural troupes, Police Band and Mounted Police, was taken out from Town Hall premises, which was flagged off by Mayor (in-Charge) Sunanda Palanetra.

The procession with a vehicle carrying the statue of Dr. B.R. Ambedkar passed through the main thoroughfares of the city before reaching Kalamandira on Hunsur Road, where a stage programme was held.

Speaking after inaugurating the stage programme at Kalamandira by offering floral tributes to the portrait of Dr. Ambedkar, District Minister S.T. Somashekar said that Dr. Ambedkar Jayanti was not celebrated in a grand manner since two years due to outbreak of COVID-19 pandemic and hence the grand celebration was being held now besides stating that a procession was organised by the District Administration for the first time.

Pointing out that Dr. Ambedkar Bhavan, which is being constructed at a cost of Rs. 44 crore is still not completed, the Minister said that the Government has sanctioned an additional Rs. 17 crore for speedy completion of the Bhavan, which will be completed in the next six months. This will be the biggest Ambedkar Bhavan in the State, he added. The Minister also said that the financial aid for SC/ST communities has been increased from the existing Rs. 15 lakh to Rs. 20 lakh.

Speaking after flagging off the procession, MP Sreenivasa Prasad said that just like Ambedkar Jayanti is being celebrated across the country in a grand scale, the Jayanti of the ‘Father of the Constitution’ is also being celebrated at Ashokapuram today.

Pointing out that he was born in Ashokapuram and celebrating Dr. Ambedkar Jayanti here every year, the MP said that everyone should make honest efforts to spread the message of Dr. Ambedkar.

The event was inaugurated by UoM Vice-Chancellor Prof. G. Hemantha Kumar. Speaking on the occasion, the VC said “We have to analyse ourselves as to where we are leading through celebration of democratic values” and called upon everyone to read Dr. Ambedkar’s articles and speeches.

Rank holders in Ph.D, Degree and PG courses were felicitated on the occasion.

Various other organisations too celebrated Dr. Ambedkar Jayanti this morning. While Jai Bheem Youths of Gandhinagar took out a bike rally, Dalita Abhivrudhi Sangha and Ramabai Ambedkar Mahila Swasahaya Sangha held the celebration at its premises in Vidyaranyapuram. Various educational institutions had also organised special programmes on the occasion.