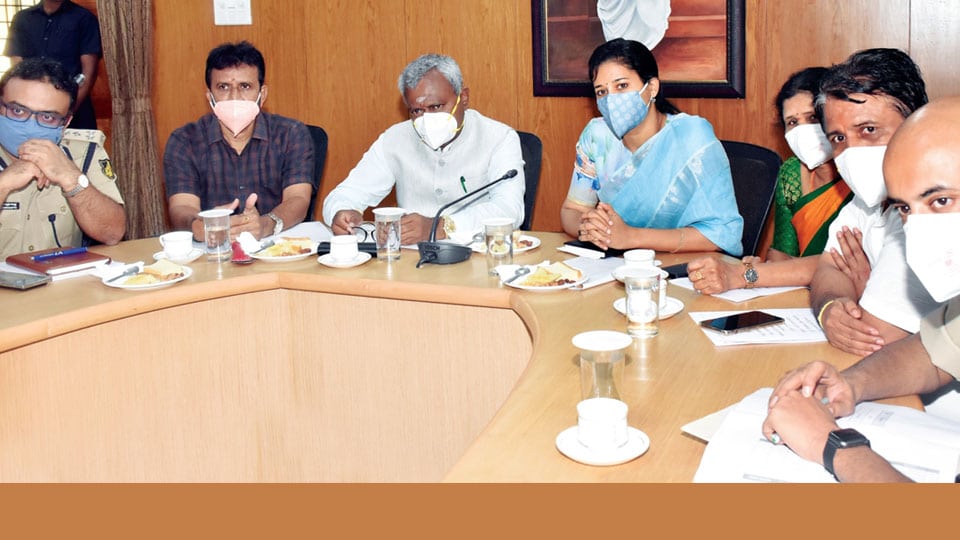 Mysuru: Mysuru District reported 260 COVID-19 cases yesterday, the highest this year, in the second wave that has hit Karnataka. With this, the District has reported a total of 56,524 cases so far.

In the light of increasing virus infections, Mysuru District Minister S.T. Somashekar held a review meeting with top officials from the district at the Zilla Panchayat Hall this morning to take stock of the situation and chalk out additional measures to be taken for arresting further spread of the pandemic.

After discussing with the Health Secretary, the District Minister told the meeting that two lakh vaccine vials would be sent to Mysuru to meet immediate requirement.

Later speaking to reporters outside the meeting hall, Somashekar, however, said that one lakh vaccines will be made available soon.

Of the 56,524 persons tested positive in Mysuru so far, 54,428 persons testing positive had been discharged and yesterday 97 were discharged. There were a total of 1,061 active cases as on yesterday and the number of people who had died due to COVID-19 in Mysuru stands at 1,061 so far.

At the meeting with officials, Somashekar said that they must initiate more serious approach to contain the spread of the pandemic. He called for rapid enhancement of RT-PCR tests and a faster and a wider vaccination drive. The Minister was told that the Health Department staff was collecting about 4,000 swabs each day for testing and till April 3, a total of 10,07,338 tests had been conducted.

Deputy Commissioner Rohini Sindhuri said that the number of positive cases is rising consistently and the District at present had only 8,000 vials of vaccine which is hardly sufficient to vaccinate a large population.

DHO Dr. Amarnath told the Minister that there were sufficient beds in Government and Private Hospitals to meet any emergencies. A total of 150 beds are readily available, he added.

Explaining the measures taken for controlling the virus spread, DC Rohini Sindhuri said that the Administration has banned all fairs and festivals in April. She noted that the rising cases were mainly due to laxity among the people who are careless about following COVID-19 guidelines.

Observing that a total ban on traditional fairs and festivals would make the people angry, Minister Somashekar asked the DC to consider the possibility of allowing important fairs by limiting the participation to below 50 persons while also ensuring appropriate COVID-19 behaviour.

MCC Health Officer Dr. D.G. Nagaraj sought severe restrictions on the number of guests in marriage halls and other indoor functions and programmes and as well as in markets and malls. Pointing out that the MCC was conducting RT-PCR test for its staff from today, he sought a couple of more ambulances for the MCC to meet emergencies.

Highlighting the measures taken by the MCC for widespread testing, Dr. Nagaraj told the Minister that Mobile Testing Squads are positioned at places of large public gatherings.

‘Karnataka gets 46 lakh vaccines till date’

Health and Medical Education Minister Dr. K. Sudhakar told reporters in Bengaluru this morning that till yesterday, Karnataka has received 46 lakh vaccine doses from the Centre. He said that as there was a shortage of vaccines in Karnataka, the Centre has sent 15 lakh additional vaccines to meet immediate requirement and the vials would be distributed to the districts in the due course. Priority would be given to those districts that are witnessing an infection spike, he added.