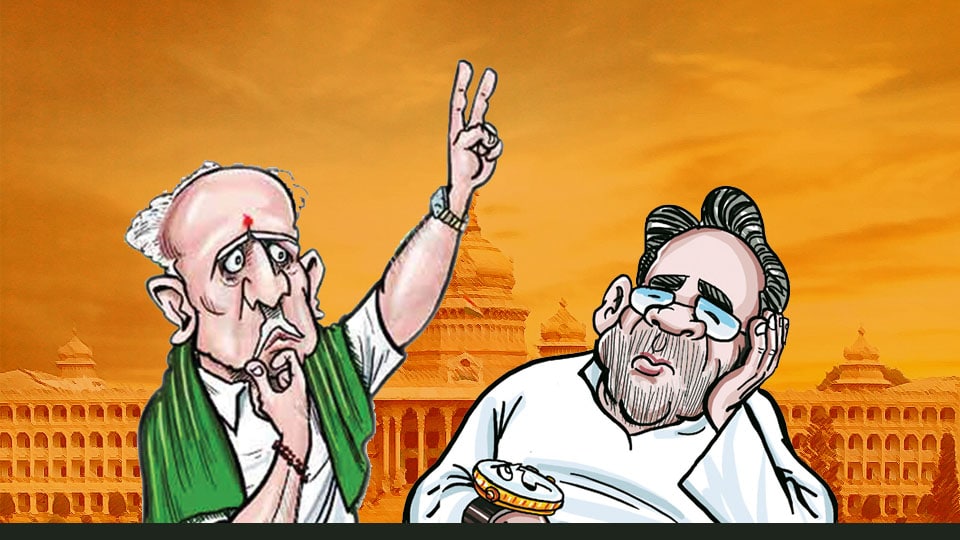 Yeddy won the BATTLE but… Siddu WON the war

B. S. Yediyurappa has been sworn-in a fourth time as CM but can he complete his term this time at least?  To begin with, he has to win the Trust Vote on Monday and then get the Finance Bill passed by Wednesday so the Government employees can get their salaries.

Then comes the challenge of changing the Speaker and accommodating ‘select’ rebels into his Ministry without disappointing old BJP MLAs. This is a tough task given the CM cannot exceed 34 Ministerial berths.

And then comes the toughest part, by-elections.  BJP will have to win at least 8 out of 16 seats in the by-elections to get a simple majority of 113. We have to remember all these 16 seats belong to JD(S) and Congress right now, which means it will be difficult to snatch them away.

At the moment, all that the BJP has to do is make sure on Monday the Trust Vote goes smoothly which will guarantee Yediyurappa gets at least six months in power. A Government that has won a Trust Vote cannot be asked to prove its majority before the end of six months but after six months…Congress can move a No-Confidence Motion if they can poach some disgruntled BJP MLAs.

But that will depend on the ‘S’ factor. The BJP has, according to H.D. Kumaraswamy (HDK), tried to bring down the JD(S) – Congress coalition 6 times before, but succeed this time. Now, the BJP in its 7th attempt didn’t deploy any new strategy, so what changed? Was it the ‘S’ factor — Siddharamaiah.

He walked out of the party calling it a “father-son” party. Siddu then joined Congress and went on to become the CM and complete a full term. Now the truth is if not for the force of Rahul Gandhi Siddharamaiah would have never agreed for a coalition with JD(S).

As if a coalition with his old nemesis was not bad enough he was then made to sit in the Government powerlessly and watch a party that had just 16% seats and a family that he disliked, assume, consume and wield all the power. Did the Congress  think Siddharamaiah would sit quietly and allow himself to be enfeebled? No way.

Siddharamaiah may have been just biding his time. And his time came the day Rahul Gandhi resigned and left Congress a leaderless and rudderless party.

Soon Siddu cut loose his loyalists. And soon enough he taught the ‘father-son’ a lesson. Sweet revenge. And the beneficiary of this game of thrones was Yediyurappa. After all, 7 of the 16 rebels hiding out in Mumbai are Siddharamaiah loyalists.

Some say that the rebel MLAs were frustrated with JD(S) and took the decision on their own. Well, may be so, but we also heard a visibly irritated Siddharamaiah say, “Rajinaame kottu hogalu heli’ (ask him to resign and go) referring to Kumaraswamy.  This was picked up by a microphone that was not turned off during the Trust Vote! Even better, two days after the Trust Vote, on Thursday, one rebel MLA Shivaram Hebbar had visited his Constituency Yellapur in Uttara Kannada, where he said, “we just followed Siddharamaiah’s advise”!

Also it is an open secret that Siddharamaiah wants to see the demise of JD(S) or at least the political failure of Deve Gowda family but as long as HDK is the CM, JD(S) will be well-funded and survive.

Every time a party comes to power they will develop enough “financial support structures” to survive for about a decade, depending on the number of elections they fight in between. So why would Siddu want HDK in power which will only enrich JD(S) and family that almost flung him into political oblivion?

The truth is Siddharamaiah much preferred a BJP Government with him as the Opposition leader rather than be an invalid in a coalition led by “father-son” party. And now he has got just that.

As of today, Congress Legislature Party leader Siddharamaiah is the Opposition leader. In an interesting blooper, Siddharamaiah during the Trust Vote said, “I am the Leader of the Opposition. Oh sorry, leader of Congress Legislature Party.” His blooper resulted in laughter across the floor but look who’s laughing now? Siddu is having the last laugh.

While getting rid of “father-son” party he has also managed to neutralise his competition within the Congress Party  — Dr. G. Parameshwara and D. K. Shivakumar, who were Deputy CM and Water Resources Minister respectively are now power-less and position-less. Wah! Siddu,  well-played.

For now, let’s hope, for the sake of B.S. Yeddyurappa, who now spells his name with an ‘i’ as ‘Yediyurappa’ can complete his full term or else he might have to change his spelling once again to “Yeddi-Yellidhirappa” (Yeddi, where are you?) because BJP may cite his age, 76 and relegate him to the Margadarshak Mandal.

While the fight to rule Karnataka continues, in this round at least Yediyurappa may have won                   the battle to grab the throne but it is Siddharamaiah who has won the war, and in doing so Siddu may have turned the next poll battle into a two-party fight — BJP Vs Congress.