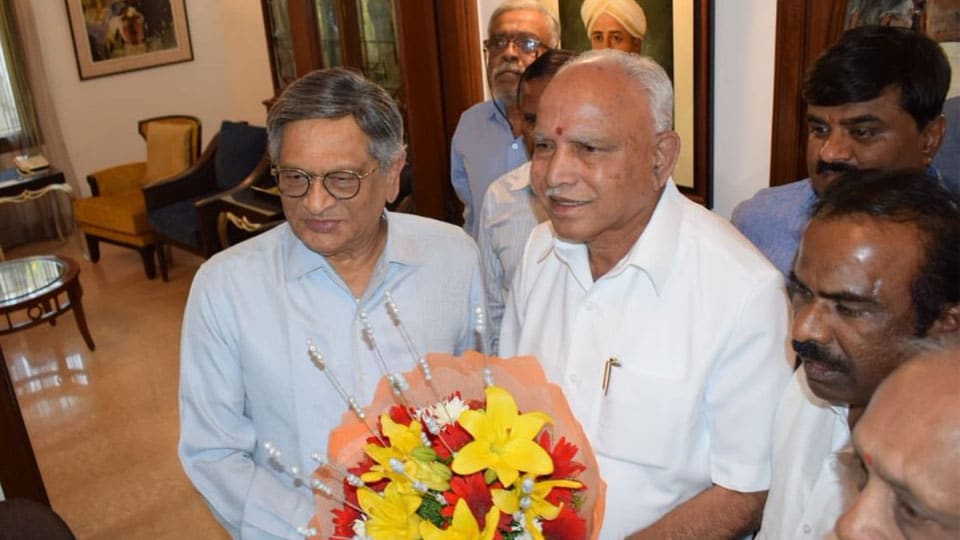 Bengaluru:  With the party yet to decide on fielding a candidate for the Mandya Lok Sabha seat, State BJP President and former CM B.S. Yeddyurappa held talks with former Union Minister S.M. Krishna on Saturday regarding the LS polls.

The meeting follows after Krishna, a former Chief Minister who was associated with the Congress for decades earlier, agreed to campaign for the BJP in the Lok Sabha seats coming under old Mysuru region.

The meeting assumes significance as the BJP is in a dilemma on whether to support Actress Sumalatha, wife of late actor-turned politician Ambarish or field its own candidate for Mandya LS seat.

The meeting between the two top BJP leaders comes just a day after Sumalatha met Krishna at the latter’s residence and sought his support. Meanwhile, it is learnt that the BJP is still making efforts to bring Sumalatha to the party fold.

The BJP is also looking at the prospect of extending support to Sumalatha if she chooses to contest as an independent to take on Nikhil Kumaraswamy of the JD(S).

Speaking to press persons after meeting Krishna, Yeddyurappa said that Krishna has given some suggestions and the BJP top brass will decide what to do next based on Sumalatha’s decision, which is expected to come out tomorrow (Mar.18).