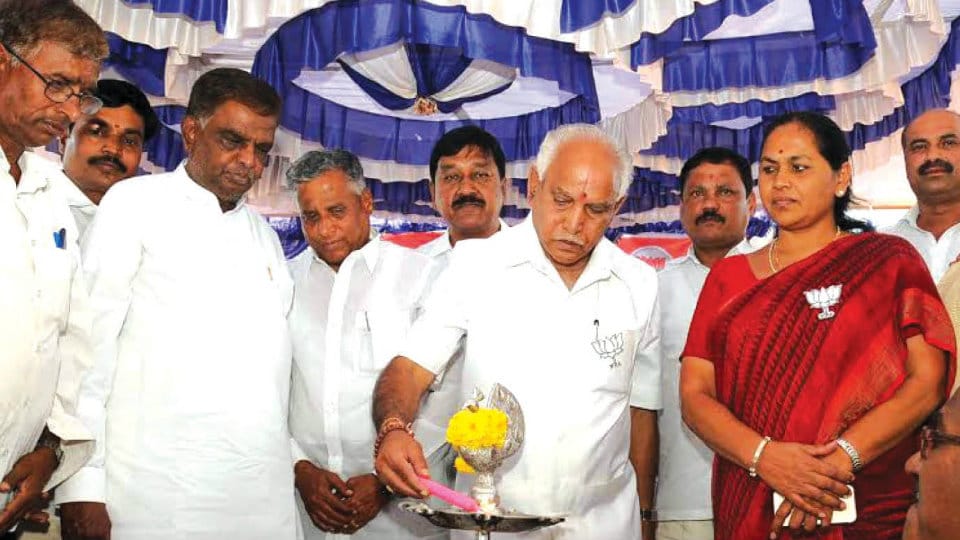 Accusing Chief Minister Siddharamaiah of falsely painting him as a culprit, even though the Courts have exonerated him of all the charges filed against him, former Chief Minister and State BJP President B.S. Yeddyurappa has warned the Chief Minister of filing a defamation suit against him if he continued to call him a past prisoner.

Addressing a BJP poll rally at Badanavalu in Nanjangud Assembly segment yesterday, Yeddyurappa alleged that Chief Minister Siddharamaiah and Chamarajanagar MP R. Dhruvanarayan were shameless even as the two continue to call him (BSY) a past prisoner.

Claiming that false cases were filed against him and the Courts had exonerated him of the charges, BSY lashed out at the Congress for failure on all fronts.

Pointing out that the Union Government led by Prime Minister Narendra Modi had initiated several measures for empowerment of women, he alleged that the Siddharamaiah Government had completely ignored ‘Bhagyalakshmi’ scheme introduced by the BJP Government for the welfare of women.

Declaring that all farm loans will be waived off if the BJP Government comes to power in the State, Yeddyurappa hit out at Congress Ministers and Legislators for focussing  only on poll campaign at a time when the State was reeling under the worst drought in over four decades.

The party candidate V. Sreenivasa Prasad, who also addressed the rally, said that Chief Minister Siddharamaiah must have now realised the power of Yeddyurappa and Sreenivasa Prasad coming together.

Maintaining that Chief Minister Siddharamaiah was yet to come out with the reason why he (Prasad) was dropped from the State Cabinet, Prasad said that the CM wanted only money bags in his Cabinet.

Stating that the entire Cabinet is camping at Nanjangud for ensuring his (Prasad) defeat, he said that he was not the one to be deterred by the Congress game plans as he knew every trick of the Congress. Claiming that the Congress has fielded Kalale Keshavamurthy after promising to clear all his (Kalale) debts, Prasad called upon the electorate to teach a lesson to the Congress Government for its audacity.

Noting that the Nanjangud by-poll had become a ‘Kurukshetra’ battle between him and the Congress, Prasad likened the BJP to Pandavas who were taking on the Kauravas (Congress).

Exuding confidence of a victory in by-polls, Prasad said that all efforts of the Congress to win the election by hook or by crook will be thwarted by the voters who are very much inclined to vote for the BJP.

Every sentence of Prasad’s speech received a thundering applause from the gathering. Many Muslim women joined the BJP on the occasion.