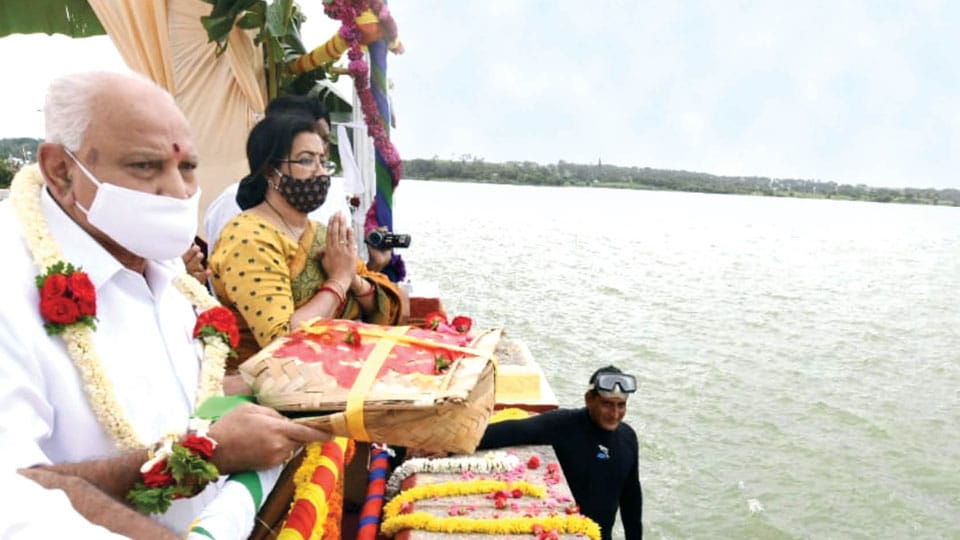 Yediyurappa offers bagina at KRS Dam for the fifth time

Mandya: Following the tradition of Chief Ministers offering Bagina at Krishna Raja Sagar (KRS) Dam across River Cauvery that is full to the brim, CM B.S. Yediyurappa this noon, performed the ritual amidst a celebratory mood.

It was Yediyurappa’s fifth Bagina. Over 20 specially designed Bagina by priest Bhanuprakash Sharma and team were offered. Each Bagina, placed on the traditional ‘Mora’ contained saree, blouse, flowers, fruits, bangles, Arashina and Kumkum and rice. The rituals were led by Bhanuprakash Sharma and other priests. After offering Bagina, Yediyurappa performed special pujas to Goddess Cauvery.

By offering Bagina for the fifth time, Yediyurappa created a record today. Notably, he is the second CM from Mandya district — hailing from Bookanakere (K.R. Pet Taluk) — besides S.M. Krishna. Even though Krishna completed a full five-year term, he could not offer Bagina for three years due to drought. Yediyurappa had offered Bagina to KRS Dam in 2008, 2009, 2010 and 2019.

On the auspicious occasion today, Yediyurappa also released a booklet that features the one-year achievements of Water Resources Ministry. The stage programme was over in 10 minutes and later, Yediyurappa left for Kabini Dam to offer Bagina.

Speaking on the occasion, Yediyurappa said that he was fortunate to offer Bagina for a record fifth time. “The State Government has plans to transform the Brindavan Gardens to world-class tourist destination. The Government will spend Rs. 8.48 crore to replace the old 16 crest gates of KRS Dam and replace them with new ones,” he added.

Farmers protest : A group of farmers had planned to show black flags to the CM to register their protest and draw the CM’s attention to the problems faced by farmers. The farmers were led by Raitha Sangha and other activists.

However, the protestors who were arriving from Pandavapura were cordoned off near Katteri and protesters who were coming from Srirangapatna were blocked at Belagola.

The protestors were arrested and bundled into Police vehicles. The Police had increased vigil in five kilometres surroundings of the KRS Dam.