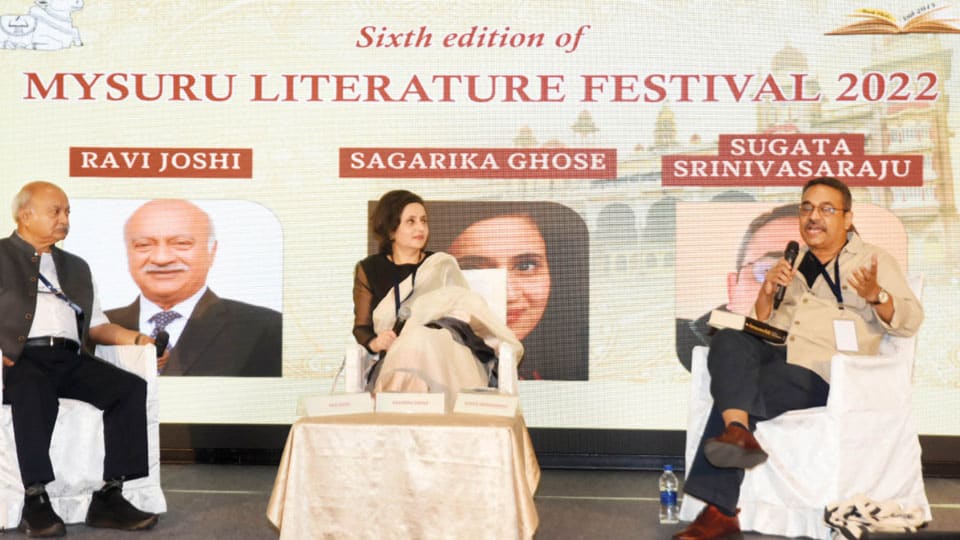 Like raindrops that keep falling through the foliage hours after the rain has stopped, I am coming back to an episode in the recently held (July 23-24) Mysuru Literature Festival.

That was about the conversation that Ravi Joshi moderated with two journalists in their avatar as authors, nay biographers. They were Sagarika Ghose who wrote about our former NDA (BJP) Prime Minister Atal Bihari Vajpayee and Sugata Srinivasaraju (formerly of Outlook magazine) who wrote about our own former Prime Minister H.D. Deve Gowda. By the way, many did not know Sagarika Ghose is the wife of Rajdeep Sardesai till they read it in Star of Mysore. A talented and made for each other couple. Let it be.

Yes, the title of their episode was eponymous — ‘Yes, Prime Minister’ — apparently inspired by the BBC’s political satire ‘Yes, Minister’ and ‘Yes, Prime Minister’ episodes. No problem. Ravi Joshi, as moderator should be a model to some of the moderators I have seen and heard. He was not smeared with an ideology or agenda to corner or embarrass the authors. He is good in extracting from the authors what is not in the book. True, with an intelligent and mostly well-informed audience that was there at the Literature Festival, it was required.

We experienced it when Sugata Srinivasaraju was asked two very important questions about H.D. Deve Gowda’s State politics and his answers seemed escapist, euphemistic and not convincing at all. I remembered Rabindranath Tagore’s words: “Truth always comes out with its final word only to come out with the next.”  Let us wait for the next final word on truth ! The next will come if some one writes the biography of former Chief Ministers Ramakrishna Hegde and of B.S. Yediyurappa. Did you get me Steve?

Be that as it may, now let me do some cud chewing on what Sagarika Ghose said about her VIP subject of the book — Atal Bihari Vajpayee. For some Ajatashatru, one without an enemy. But the country he ruled for little over five years had many ‘Shatrus.’ Hssh…

According to Sagarika Ghose, there are many ‘takeaways’ from the life and leadership of Atal Bihari Vajpayee. Mastering the art of disagreement is the first takeaway! That is Democracy. Well, to me it seems true looking at the way Congress and the Opposition in our country are ‘disagreeing’ with everything that is done and every decision that is taken by the Modi Government. And Modi seems to have learnt this art from Atal Bihari Vajpayee!

Another ‘takeaway’ was  the sense of humour. Example: When a naughty reporter asked about a resident couple, Kaul, in his house, Vajpayee did not get angry or upset, instead he was his humorous self. He said, ‘It is like Kashmir.’ Whatever it means.

READ ALSO  Cardiologist Dr. C.N. Manjunath: A visionary and a role-model of an Indian — 2

Vajpayee, of course, was a great orator like Modi, but sprinkled his speeches with humour and gags unlike Modi.  He was a believer in dialogue for resolving problems and according to Sagarika, he made it an art. But alas, he did not seem to have mastered that art to solve the problem. Look what happened to his ‘dialogue’ with and ‘bus ride’ to Pakistan. We got Kargil!

Three tallest BJP leaders are Atal Bihari Vajpayee, L.K. Advani and Narendra Modi. Unlike H.D. Deve Gowda, who claimed himself to be the ‘son of the soil,’ these three leaders are sons of RSS. However, Vajpayee is considered a moderate in BJP to the extent some likened him as Nehru in BJP who ventured to challenge Congress by the ideological tilt towards ‘Gandhian Socialism.’ It did not work anyway till it was nudged out to bring in Hindutva by L.K. Advani and Narendra Modi. Lo and behold, 2014 and 2019. Viva BJP!

According to some journalists like Sugata Srinivasaraju, Vajpayee was the will-o’-the-wisp of BJP donning different masks. In retrospect,  after seeing him as the Prime Minister, one is inclined to agree with this opinion about Vajpayee. No wonder, Sugata Srinivasaraju, tongue-in-cheek remarked that P.V. Narasimha Rao (of Congress) was the original BJP Prime Minister. After all, public opinions are formed based on what a leader delivers. Vajpayee, according to Sagarika Ghose, was a ‘weak leader.’ However, he was good in coining phrases that would draw admiration from the educated and the commoner. Like for example, ‘Kashmiriat’ without solving the problem or mitigating the sufferings of the minorities in Kashmir. Likewise the word ‘Rajadharma’, the word he used to chastise the then Chief Minister of Gujarat Narendra Modi after the Gujarat riots in 2002.

This word Rajadharma made me think of other similar words related to Dharma in Hindu Dharma or Sanatana Dharma. I have read about it in a most scholarly and comprehensive book on Hinduism by Pavan K. Varma titled “The Great Hindu Civilisation.” A book one who is thirsty to understand Hinduism, as a religion and culture born out of this religion, should read from cover to cover. A great work indeed deserving recognition by the Central Government. We have read Shakespeare but not Kalidasa or Thiruvalluvar. How much do we know about Adi Shankaracharya? Pavan Varma asks in anguish.

Why does the elite of a country turn against its own culture and civilisation? The book ponders over Hinduism’s this very existential question. Having said this, let me now turn to Vajpayee’s Rajadharma which he himself never followed, if he had, we would not have the K-problem, not Kaul, I mean Kashmir. Nor the Kargil War. And he had the gumption to advice others. I wish he had at least followed the Deshdharma or Appadharma!

Lord Buddha frequently uses the word Dharma. In the language of the common man of the time, Pali, it is pronounced as Dhamma. If it is so, so be it but Dharma as an ethical conduct has the following applications as correct behaviour in a person’s life, according to Pavan Varma. They are: A person’s Desh Dharma, Ashram Dharma, Kula Dharma, Jati Dharma, Svabhava Dharma, Svadharma, Appadharma (action taken in times of dire emergency). The wisdom lies in applying these Dharmas as per a person’s need at a given situation.

In Pavan Varma’s writing, there is no mention of Rajadharma as envisaged by Vajpayee. Well, when there are no Rajas in Vajpayee’s ‘socialstic, secular democracy,’ how can there be room for Rajadharma? It must be ‘Samvidhan Dharma’. It was faux pas committed by the great orator Vajpayee, I guess.

Pavan Varma wisely writes: “It follows then, that human behaviour must be judged, not by one normative yardstick, but several contingent factors.” Probably, Vajpayee missed this dimension of the word Dharma. Pavan Varma then writes:

“That is why, Yudhishthira, who is also known as Dharmaraja, the epitome of Dharma, is unable to answer the question posed by the Yaksha — What is Dharma? ‘Reason is of limited use for it is unconvincing, without tarka or foundation,’ he answers the Yaksha… throwing up his hands in despair. Dharamaraja’s final answer is: ‘The truth about Dharma is hidden in a cave.’ And Yaksha says the final answer is correct.