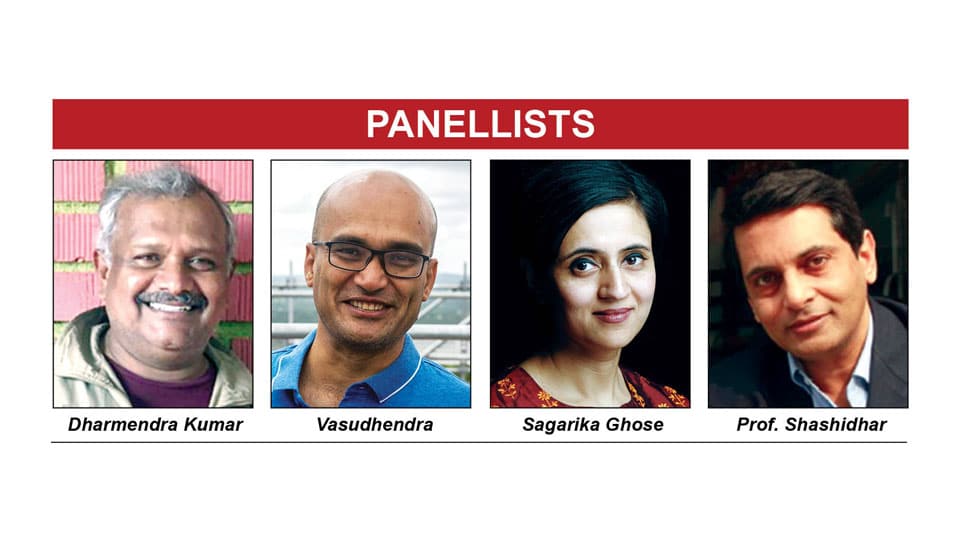 The fourth edition of Mysuru Literature Festival-2020 organised by Mysuru Literary Forum Charitable Trust and Mysuru Book Clubs-2015 being held virtually on every weekend from Aug. 14, will conclude on Sept. 5. This edition has a wide range of authors and speakers as Panellists. Today, SOM features Aug. 16 panellists — Dharmendra, Vasudhendra, Sagarika Ghose and Prof. Shashidhar Nanjundiah.

A civil engineer by profession, having worked all over the world, Dharmendra Kumar’s heart and soul resided in Karnataka and Kannada which impelled him to move to Bengaluru. Born and raised in Mysuru, his adoration towards the history of this city was drawn from the house that his grandfather bought from Krishnaraja Wadiyar. This can be seen in his book Maretu Hoda Mysurina Putagalu and his other book Savi Nenape Manadalli Arardhane is a walk down memory lane!

Born in Sandur in Ballari district, Karnataka, Vasudhendra’s literary career had a dream start. His first book, Nammamma Andre Nangishta, a collection of short stories won him the Sahitya Akademi award in 2006. His famous book Mohanaswamy was first published by Vivek Shanbhag in his Kannada literary magazine Desha Kala under a pseudonym, Shanmukha S. The author of thirteen books in Kannada, that have sold over 80,000 copies, Vasudhendra has won many literary awards, including the Kannada Sahitya Academy Book Prize, the Da. Ra. Bendre Story Award and the Dr. U.R. Ananthamurthy Award.

Sagarika Ghose is one of India’s most noted journalists, an author and broadcaster. She is the author of two novels, The Gin Drinkers and Blind Faith as well as the recently published acclaimed best-selling biography of Indira Gandhi, Indira: India’s Most Powerful Prime Minister slated for a screen adaptation. Her latest book Why I Am A Liberal:A Manifesto for Indians Who Believe In Individual Freedom has been making waves. She has won numerous awards for journalism, including the C. H Mohammad Koya National Journalism Award as well as Best Anchor Award from the Indian Television Academy. She has also been listed as one of the world’s most famous women Rhodes Scholars. Ghose is a popular and widely read columnist and at present she is consulting editor with The Times Of India.

Prof. Shashidhar Nanjundaiah is a nationally reputed media educator and brought in pioneering concepts and pedagogy into media education. He has led institutes of repute as Director of Symbiosis Institute of Mass Communication, as Founding Director of Indira School of Communication, and first Dean at India Today Media Institute. He has also been an editor of newspapers and magazines in India and the US. He has researched, spoken and written extensively on international forums on the media, communication ownership and production, political communication, and more. Recently, he has introduced a media literacy course for schools and colleges under the banner “Being Responsible.”

Instructions will be sent to registered e-mail address 24 hours before each panel starts and a reminder 1 hour before it starts.