Home » Feature Articles » A Conversation with internationally acclaimed violinist Dr. Mysore Manjunath: ‘Music expresses that which cannot be said and on which it is impossible to be silent’ 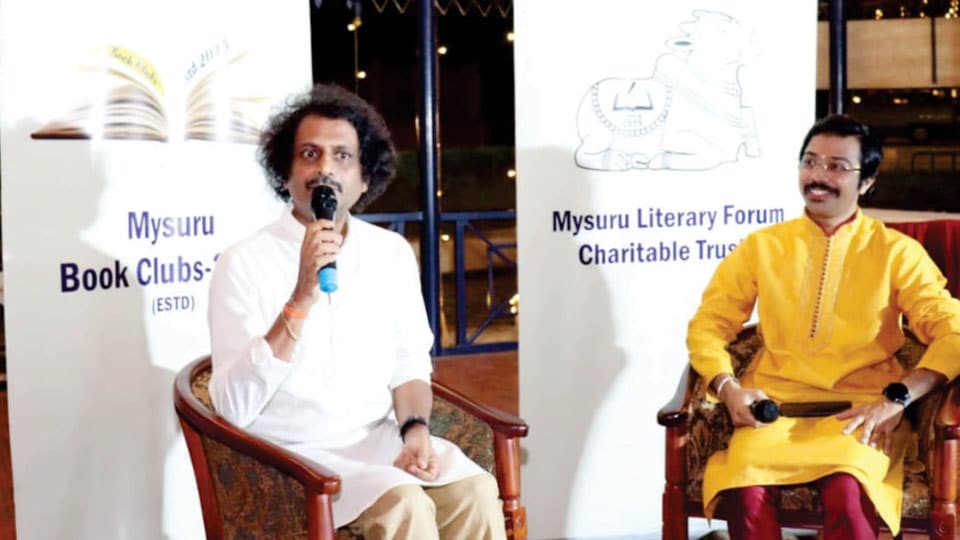 A Conversation with internationally acclaimed violinist Dr. Mysore Manjunath: ‘Music expresses that which cannot be said and on which it is impossible to be silent’

Mysuru Literature Festival brings together people from all over the country for discussions, talks and readings about literature and writing, in English and Kannada and strives to bring the community together to promote the love of literature in a positive and nurturing environment to discuss things that matter.

This time around, the aesthetic beauty of the Pool Side  of the Mysore Sports Club turned musical on the evening of September 18, 2021, as the Mysuru Literature Festival had the honour of hosting the Violin Virtuoso Dr. Mysore M. Manjunath to discuss his musical journey and the stature of Indian music in the international arena. The ambience was amplified with the presence of many learned scholars and dignitaries, including K.B. Ganapathy, the  Founder-Editor of Star of Mysore. Special thanks to the Chairperson and Director Shubha Sanjay Urs and all the Committee Members for organising this event.

Thrilling journey of a young Manjunath from a nobody to a maestro!

As a young boy, Manjunath was never fascinated with Karnatak music, forget about playing the violin, although he was surrounded by a musical household. His father and Guru Mysore Mahadevappa and elder brother Mysore M. Nagaraj were well-established musicians by then. A strict father, Mahadevappa used to take the young Manjunath to all the concerts along with them. Once it so happened that, after a violin duet concert by Mysore Mahadevappa and Mysore M. Nagaraj, the entire team on stage were garlanded except Manjunath, who was seated behind his father throughout the nearly 4-hour concert. This made young Manjunath desire for a garland too, but was denied by his father. The organiser, who was a witness to these happenings, promised Manjunath that he would be garlanded only if he performs the following year. Then started the amazing journey of the young Manjunath to becoming Dr. Mysore Manjunath.

In the early 90s, a young Indian violinist was selected to conduct a workshop on the nuances and techniques of violin playing at Princeton. As he entered the premises, he was shocked to see the western musicians sitting on the chair holding the instrument and some of them even used the violin box as their foot rest. For obvious reasons, it was just an instrument to them, a mere non – living entity.  However, the Indian violinist who was strongly rooted to the tradition was wearing a dhoti and he made himself comfortable on the floor. The first day of the workshop was completed successfully and was received very well.

The next day, the young violinist was extremely surprised to see all the participants draping themselves with dhotis and seated on the floor with their violin-boxes kept aside. This was the influence of Indian music by an Indian musician on the Western music and musicians. This was Knowledge bowing down to Knowing, Trend bowing down to Tradition and Respectability bowing down to Revolution. The young Indian violinist is none other than Dr. Mysore M. Manjunath.

The music fraternity owes a lot to Dr. Manjunath for taking Karnatak music across the globe. He has been instrumental in showcasing that music is beyond language, culture or religion. He has performed at the prestigious Royal Albert Hall, Sydney Opera House and Federation Square in Melbourne. He was invited to perform at the Royal Palace of Milan, Italy. He became the first Indian Violinist to be chosen to conduct a workshop at the international violin workshop at Sandiego. The Government of India selected Dr.Manjunath as a cultural ambassador, to perform at Sri Lanka and Iran as part of Republic Day and Independence Day celebrations. His interviews have been featured in BBC, Radio Chicago and Radio Germany.

It is important to note that the Sitar Legend Pandit Sri Ravi Shankar once exclaimed “Prince of Mysore”, after listening to his concert in the US. His recent Yoga anthem in Raga Bharatha featuring outstanding musicians across the globe received huge recognition.

Dr. Manjunath opines that Indian music has received great respect from the westerners. He highlights the differences between the rehearsed music that is more prevalent in the west to the creative or impromptu music that defines the music of the east. The westerners have identified the dexterity and the complexity of Karnatak music, for it not only requires practise, technique, grammar, rhythm, intonation are all a part of what makes it one of the most sophisticated forms of music in the world.

Raga is not a mode as a westerner understands, it is a colour as its name implies. In a colour, say between orange and red, there are 1000s of colours, many waiting to be discovered by musicians yet to come and Dr. Manjunath takes a predominant place.

Karnatak music is innovative and forever creative. It is directed to reach the depths of human experience to attain bliss, to elevate the soul, both to the performer and the listener. Just like there is a room for a Grand Master Game in chess, opening a raga is far more of an exploration of the inner recesses of his own mind. Dr. Manjunath compares the emotions that a raga can trigger in a listener to that of a painter who uses different shades to depict different moods. In the spiritual sense, he clarifies that music is beyond grammar or technique and is more of an experience.

A thanking note to Mysore Mahadevappa

Having travelled across 40 countries and seeing unparalleled success, Dr.Manjunath stayed in Mysuru despite many suggestions from maestros like Dr. M. Balamuralikrishna and the likes of Dr. N. Ramani to settle down in Chennai. It was a time when people believed that if a musician was successful, he had to hail from Chennai or at least make it his home. Mahadevappa was against that very thought and made sure Dr.Manjunath stayed back in Mysuru and travelled when it was necessary. This move, thus brought more glory to Mysuru as a seat of music and it also shows the farsightedness of Mahadevappa to preserve and uplift the quality of music in Mysuru.

[Rao R. Sharath is pursuing his Ph.D under the guidance of  Dr. Mysore Manjunath]