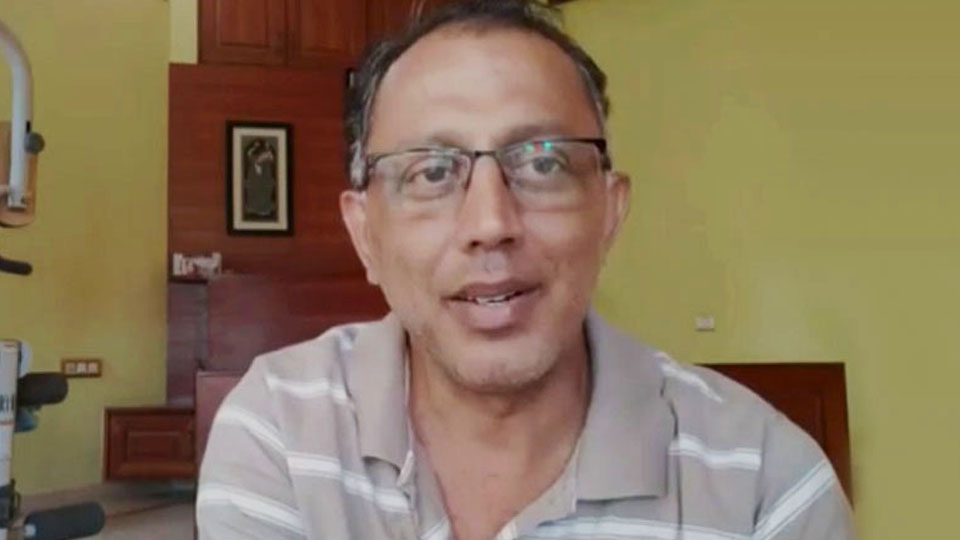 “You Can Come Out of It”

Bengaluru: Those were a difficult couple of weeks. But P.K. Venkat Raghavan can now, literally, breathe easy. “I am the first patient coming out clean… and I never infected my family. That’s a big deal. I don’t hope it will come to you. But if at all it comes, it is manageable.”

These are pearls of wisdom from Venkat, the first Covid-19 patient in Bengaluru to be discharged after the viral disease ran its two-week course.

He had gone to the United States in early March on an unavoidable office trip, and returned via Heathrow Airport in London.

A resident of Rajarajeshwari Nagar in West Bengaluru, he tested positive for the novel Coronavirus within a day of returning and got himself admitted to the Rajiv Gandhi Institute of Chest Diseases (RGICD) soon after. Now, he has a message for the world reeling under the impact of the pandemic: “You can come out of it. I’m a testimonial of this. You can manage it.”

Venkat has made videos of what he went through and shared them on YouTube for the world to see. He is not exactly sure where he contracted the virus, though he was very careful — it could possibly have happened either because of the common bathrooms at the airport that he inevitably used, where surfaces were likely touched by infected co-passengers, or a security scanner that required fingerprints. Or, perhaps, an infected co-passenger was sitting too close.

In any case, he felt something was amiss as soon as he arrived. He asked the doctors at the airport to test him, but the infrastructure at the time was not yet up and running. He was asked to go home. Since his company had sent a car with a driver wearing a mask, he decided to go straight home and decide on his next plan. He went to a local private hospital but the doctors there were too scared to admit him. His brother-in-law then did the research and referred him to RGICD, he says in a video.

“There they did file creation immediately, gave me medicines and took the test considering my travel history. I returned home and spent the night away from my family again. The next day, I got a call from the doctors that my virus load was too high, and asked me to get admitted. In fact, I was happy, as I did not want to infect my family. I requested for an ambulance and they arranged it. I packed up and got admitted to the isolation facility,” he says, adding that the consternation in the neighbourhood when people saw the ambulance is a story for another day.

The initial room was a small one with a creaky bed, but the hospital was still setting up its Covid-19 facility. He was moved to a better room in a couple of days. Food was also an issue, as the hospital had spicy fare and the food he arranged for could not be delivered as the person bringing it was too scared to go into the hospital. He slept hungry through some of his fevered days.

“My temperature used to shoot up in the mornings,102 degrees or so. But the doctors really guided me well. They put me through antibiotics to prevent secondary infections, as this is a fever there is no way to control, and there is no vaccine. They give you a Tamiflu variant called Starflu, and fever-reducing medicines. So you have to go through the day with fever,” he says and adds, “I’d never had a fever this long. But in two weeks, it subsided. I was happy about the income tax I paid for so many years. There are people with a service mindset. The doctors were good. My guru helped me manage my days better. He explained that the reason for early morning high fever was the body fighting the infection.”