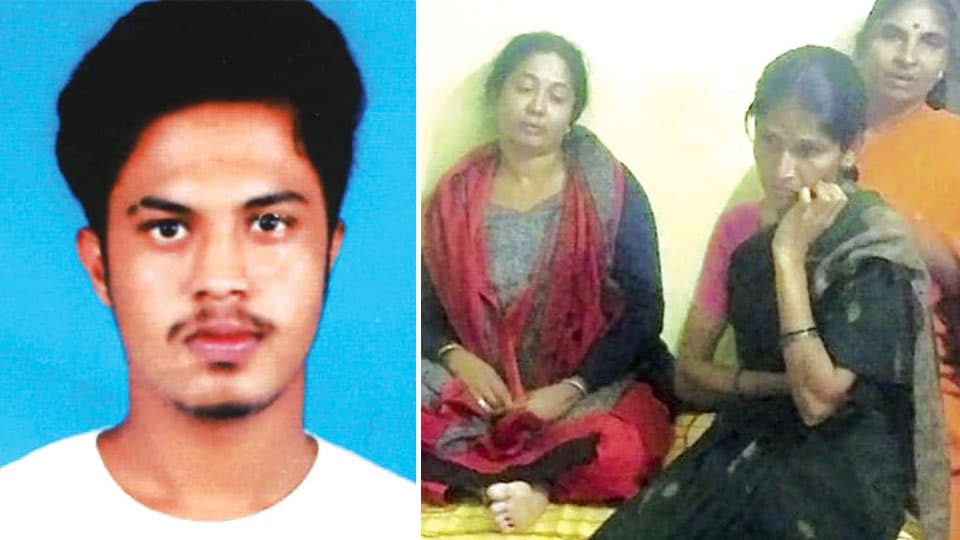 Mysore/Mysuru: Seven months after he drowned in a lake in Malaysia, the body of Sumanth, a native of Periyapatna, was brought to his village yesterday and the last rites were performed by tearful relatives. The family had lost a young breadwinner who had gone to Malaysia to earn a living.

Sumanth (22) died on December 15 last year under mysterious circumstances and his remains were brought to India, thanks to the efforts by Mysuru-Kodagu MP Pratap Simha who left no stone unturned to help the family. Due to a lot of technical issues and the ongoing COVID-19 pandemic, the body could not be brought earlier.

The mortal remains arrived at Tiruchirapalli International Airport in Tamil Nadu on Monday due to the efforts of the Indian High Commission and were brought to Boodithittu in Periyapatna yesterday.

Sumanth, son of Shobha-Venkatesh couple, had gone to Malaysia to earn some money to support his family. The family depended on agriculture and Sumanth’s mother is a tailor. Sumanth secured a diploma and managed to secure a job in Malaysia through a job network agency. His job was in a goods ship in that country. The family got information that Sumanth drowned in a river near Batang Lebaan on Dec. 15.

‘My son was cheated’

Sumanth’s mother Shobha said that the Centre, Pratap Simha and his Personal Secretary in New Delhi Pavan Kumar and the Indian High Commission in Malaysia helped the family in getting the body. “The local MLAs in Tiruchirapalli arranged ambulance for the body to reach Periyapatna. My son was cheated on a foreign soil and no parent must face this plight,” she added.

Sumanth drowned in the river and his body was fished out in a decomposed state. The Indian High Commission in Malaysia was contacted through Pratap Simha’s good offices.

Parents had paid Rs. 4.5 lakh to a Gujarat-based agent Manish Patel for Sumanth to get the job in Malaysia. The agency had assured a monthly salary of Rs. 70,000 but when Sumanth joined the work, he was paid only Rs. 18,000, the family had alleged. Sumanth was promised a job in an oil tanker company but was forced to work on a sand dredging boat.

His body too was found near a sand barge.