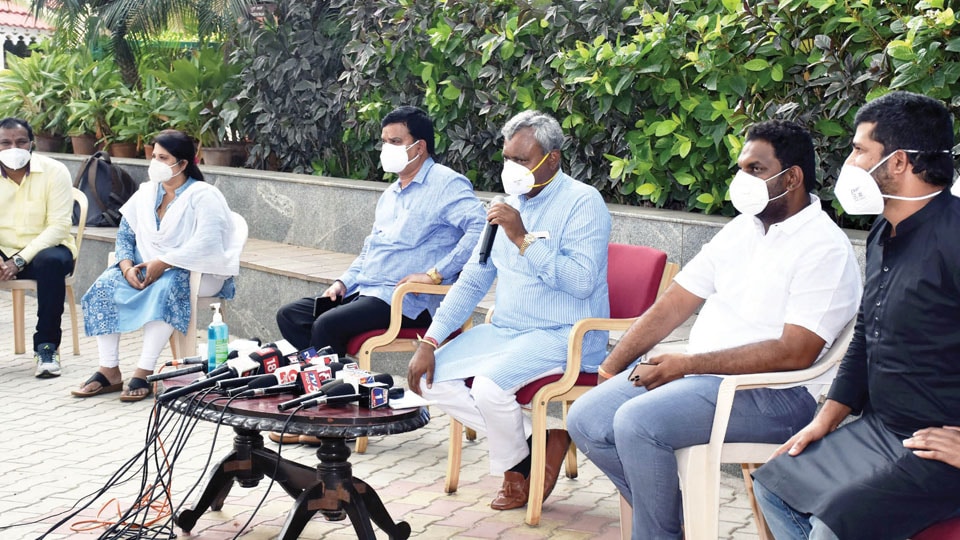 Mysore/Mysuru: Zoo Authority of Karnataka (ZAK) Member-Secretary B.P. Ravi has requested Co-operation and District in-Charge Minister S.T. Somashekar to impress upon the State Government to release immediately Rs.36.79 crore towards the maintenance of nine Zoos in the State.

“The century-old Sri Chamarajendra Zoological Gardens and Bannerghatta Biological Park with the available funds can manage for the next three months. After that we will go red,” Ravi explained to the Minister who visited the City Zoo yesterday.

He said the State Government has released Rs.9.20 crore towards the maintenance of Zoos. After the first wave of Corona, tourism was picking up and the second wave has hit so hard that the Government was forced to announce lockdown. All the Zoos have been shut down for the last two weeks. Whatever the money available in Mysuru Zoo and Bannerghatta Park may last for another three months. After that, they may face financial crunch, he added.

Ravi explained that the annual maintenance of the Zoos was around Rs. 93.33 crore of which Rs. 32.54 crore comes from Gate fee. The Zoos spend Rs.25.40 crore on feeding animals, Rs.37.56 crore towards the salary of 800 employees, Rs.3.75 crore on health of animals and Rs.16 crore on maintenance of Zoos. The Mysuru Zoo and Bannerghatta Park have kept Rs.12 crore in Fixed Deposit which will be used now. Besides, Rs. 8 crore special grant released by the Government for all 9 Zoos and Rs. 4 crore given for Shivamogga Zoo will also be utilised. It has been decided not to take up any new works in view of the current crisis, he noted.

No infection in animals

No infection has been observed in any animals housed in the Zoos. Usually, lions are susceptible to infection but they are hale and healthy. Three Zoos have lions, tigers and leopards and they are being observed daily. Lions, if infected, stop taking food and develop cough and fever. Treatment for the animals will be done as per the guidelines of the State and Union Governments by giving them antibiotics and vitamin supplements. —ZAK Member-Secretary B.P. Ravi