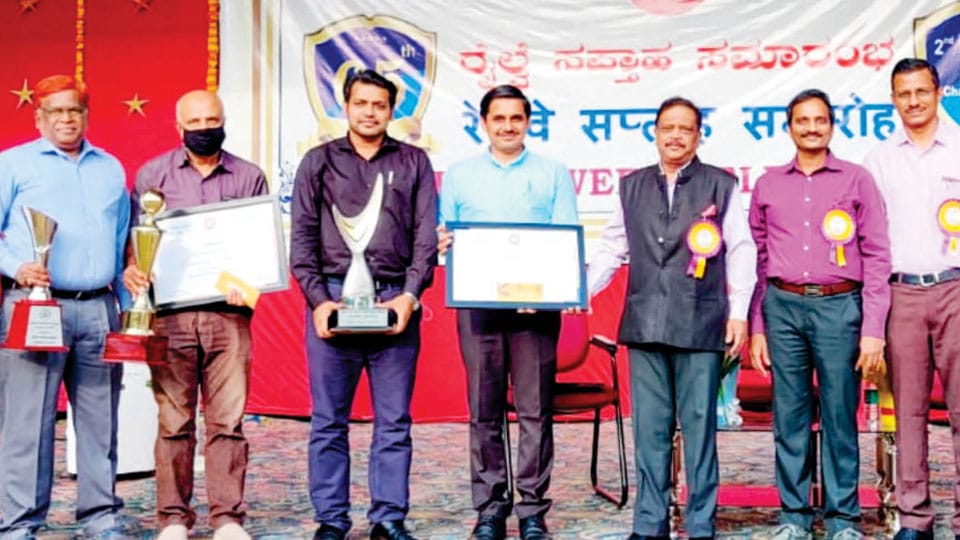 Mysore/Mysuru: Mysuru Division of South Western Railway (SWR) celebrated the 65th Railway Week on Dec. 2 at Chamundi Officers’ Club, Yadavagiri. Railway Week is an annual event to commemorate the commissioning of the first passenger train way back in April, 1853. This year’s event could not be held in April due to the COVID-19 pandemic.

Agarwal said that Mysuru Division, with an aim to double the freight traffic, has constituted Business Development Units at the Divisional and Sub Divisional level and has been striving hard to increase its freight volume along with ease of doing business.

The DRM also presented the other highlights of the Division. These include zero accidents except one yard derailment, overall loading of 8.14 million tonnes when compared to 4.644 million tonnes during last year.

Amid major infrastructural and doubling works, the Division could achieve a sterling punctuality of 85 percent, both mail and express. The division’s originating earnings stood at Rs. 844 crore, a year-on-year growth of 29 percent. It transported 412.8 lakh passengers. 30 level crossings were eliminated and new under bridges and over bridges were constructed.

This apart, speed of trains was increased to 100 kilometres per hour on a total of 220 routes. Three new trains were introduced connecting Shivamogga town with Andhra Pradesh and Tamil Nadu and Mysuru city.

The Rail Museum was renovated and expanded. Monumental Flags were installed at all 11 district headquarters. Provision of information about Mysuru Station at click of a button and a specific station website was launched — www.mysururailwaystation.com

With a view to providing visitors an opportunity to cherish the memories of their visit to Mysuru and also to promote ‘Made in India’ products, a souvenir and four kiosks have been opened at Mysuru Railway Station.

Staff welfare initiatives have been taken to make the Division employee friendly. These include air-conditioning of running rooms and new staff canteens. The Railway sports ground has been provided with flood lights and a brand new pavilion.