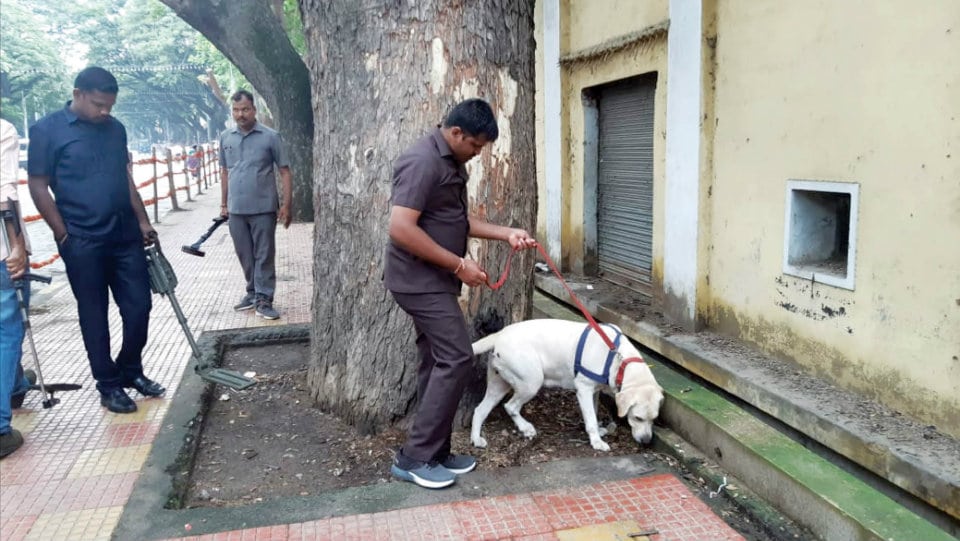 Mysuru:  An unprecedented 10,000 Policemen drawn from various districts will keep a close watch on Dasara events on Oct.7 and 8.

This is for the first time that such a large number of Policemen and officers have been deployed for Dasara security. In the previous years, over 5,000 to 6,000 Policemen were on security duty.

Speaking to Star of Mysore this morning, DCP (Law and Order) M. Muthuraj said that apart from the existing 3,500-strong City Police force, more than 6,500 Policemen have been brought to maintain law and order. They include SPs, Dy.SPs and Inspectors.

This apart, teams from Anti-Sabotage units, Bomb Squads and Dog Squads are on special duty.

The precautionary measures have been taken based on the directives from Chief Minister B.S. Yediyurappa and City Police Commissioner K.T. Balakrishna.

All Officers and Constables are briefed daily at City Armed Reserve (CAR) Grounds. The Anti-Sabotage teams and Bomb Squads have been checking the Jumboo Savari route from Palace to Bannimantap.

Each tree, drain, lanes, by-lanes, culverts and signals are being checked since the last three days along the procession route. The route is being checked every three hours, DCP Muthuraj said. All the hotels, resorts, inns, home-stays and service apartments have been asked to report their guests and also screen all their identities and behaviours with CCTV cameras. Any suspicious activities have to be reported to the Police, he added.

Apart from checking suspicious vehicles at all the entry and exit points, Mobile Command Centre is keeping a close watch on vehicle and people movements. Also in addition to the existing 58 CCTV cameras on the procession route, 110 more cameras have been installed till Dasara is over.

Drones have been banned and those government agencies who want to use the drones have to seek prior permission from the Police. All old buildings located on Jumboo Savari route will be locked to prevent people from climbing those weak structures that cannot handle pressure, he added.