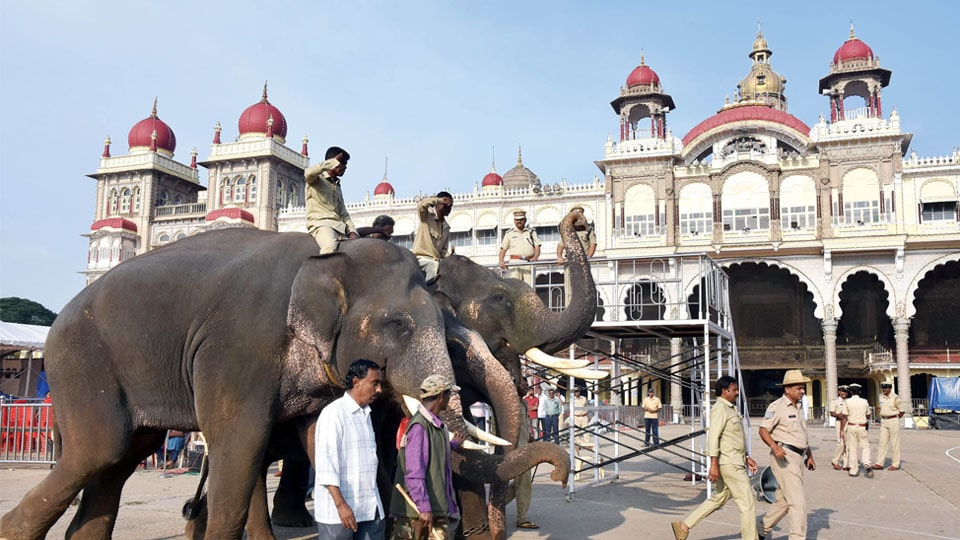 Mysuru:  With just two days left for the grand Dasara procession, the final rehearsal of Jumboo Savari was held successfully at Mysore Palace with Arjuna and other elephants passing the cannon test with ease.

In the rehearsal held this morning, Police Commissioner K.T. Balakrishna showered flowers to Howdah elephant Arjuna in the presence of DCP M. Muthuraj and CAR DCP Chennaiah. Arjuna was accompanied by Kumki elephants Vijaya and Kaveri.

Speaking to media persons, City Police Commissioner K.T. Balakrishna, said that the final rehearsal was successful and added that the elephants, horses and others were fully prepared for the grand finale (procession) to be held on Oct.8.

“The procession which begins at 4.20 pm with Chief Minister B.S. Yediyurappa showering flower petals to the idol of Goddess Chamundeshwari kept inside the Golden Howdah will reach Bannimantap at about 6.30 pm,” he added.

Jumboo Savari rehearsal will not be held tomorrow. However, Police personnel will conduct Torchlight Parade rehearsal at Bannimantap Grounds.