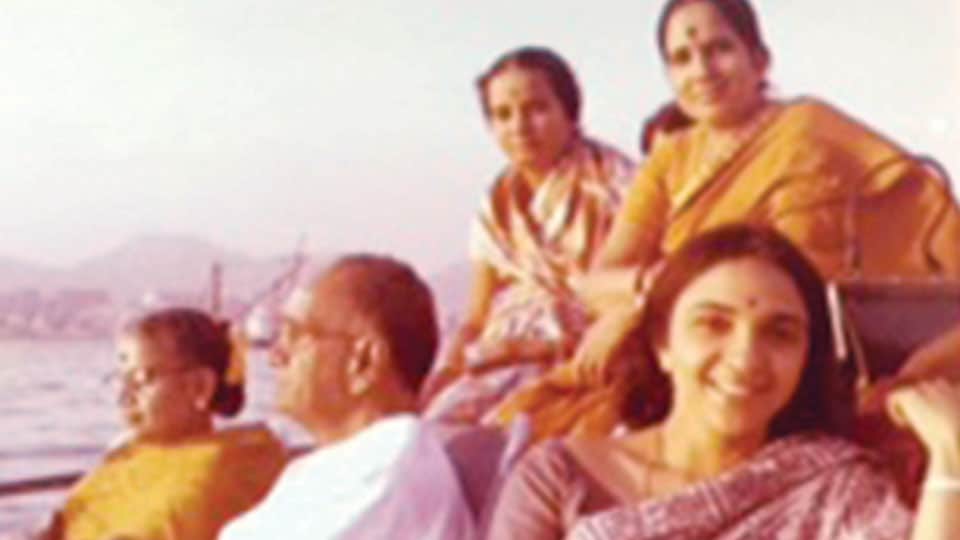 In 1942, I remember attending an ‘Upanayanam’ in Madras, [now Chennai]. I was about  four years old, playing in the sand under the rows of chairs in a ‘Pandal’. MS, a vision in a shimmering green and red silk saree, ascended the dais for her concert. Later I learnt that the ceremony was for my future husband, A. Madhavan, then nine years old. My parents-in-law were Rasikas who admired MS.

Strands of her music are woven into my memories in a golden skein. We collected some early 78 RPM records, audio tapes and CDs. On vacations in Mysuru in the 60s, I would wake up early to the strains of her “Suprabhatam” played on the loudspeaker of a small local teashop.

From 1974 to 1977, we lived in Hong Kong, where my husband  was posted as Commissioner of India. MS was to receive the Ramon Magsaysay Award in person in Manila in 1974. She travelled there with her husband T. Sadasivam and step-daughter, Radha  Viswanathan. On their way home they decided to stop over in Hong Kong and opted to stay with us rather than in a hotel. I felt honoured as well as flustered to receive them, concerned about providing them their needs. We had a dour Chinese Amah called Ah Li and an elderly cook, Ah Wu. He always addresses me as “Missy” in the Chinese/ English dialect. Though polite, he told me firmly “Missy wantee Indian food for guest, Missy make. I no can doing.” Short cuts like ready made idly or dosa batters, were not available, my own culinary abilities were limited. I was to take them sightseeing, so there was little time to spend in the kitchen.

I need not have worried as they were accommodating, trying different breakfast foods, favouring toasted wheat germ with honey of various flavours and milk. They enjoyed exotic fruit like rambutan and mangosteen. Radha was very caring about ‘Amma’ and helped me get her a cup of warm milk or cocoa at bed time.

Our home was halfway up Shouson Hill, famous for the British fortifications against the Japanese in the Second World War. They admired the view from the balcony. Below was the wide sweep of Deep Water Bay with its pristine beach. ‘Tiger Mountain’ sloped down to the sea while the sky above provided varying shades of colour, light and shade to the scene. Ocean Park and the aquariums are now situated in this area.

I  worried about the local laundry as I had been over-charged for ‘One long tablecloth’, when I sent a saree to them. Sadasivam only wore very fine cotton dhotis. To my surprise Ah Li laundered and starched them well, but refused to do them twice a day with ‘No can doing’. I arranged some shopping and a boat ride to see Hong Kong from the sea for them.

Madhavan had the more difficult job of arranging a concert for MS at short notice. Hong Kong then was a British Crown Colony. The social circle consisted of British officials headed by the Governor, businessmen, expats and foreigners. There were rich Chinese with lavish life styles, the working class, fisher and boat people such as in ‘Aberdeen’, a boat and seaside settlement.

Hong Kong had a big Indian community of many ethnic groups. While modern and sophisticated, they also carefully maintained their social and religious traditions. The Sindhi community for example, was a large one with some wealthy and prominent members. They had their own radio programmes and papers and an active social life. A young couple held a “Black and White” theme party in a fashionable hotel; the ladies wore black or white sarees or dresses with glittering jewellery to match, the men were in tuxedos. The dining room decor featured linen and crockery designed in black and white, wall decorations also carried the same motif. The party was a resounding success. But afterwards, going home on the winding hill-roads, the host’s car was involved in a pileup with those of some guests, there were injuries and jewellery went missing. A ‘homa’ was held to off-set the effects of the unlucky black and white theme.

Karnatak music was not well-known to the diaspora. What kind of dance did the artiste perform, asked a few. The Indian Associations agreed to publicise the event and a concert was arranged. That day MS made a gracious gesture to me. She used to have sarees specially woven for her in unique colour combinations. The ‘MS Blue’ was much sought after. For this concert she and Radha Viswanathan had chosen a purplish silk with a crimson border adorned with two rows of gold lace ‘rudraksham’ motifs. I was overwhelmed when she gave me an identical saree. That saree has been a favourite of mine over the years.

Identically attired, we drove to the concert hall, where a curious and expectant audience waited. After fine tuning her tamboora and singing a soft ‘Sa Pa Sa’, MS started the alapana of Raga Shankarabharanam, one of Madhavan’s favourites. The audience was unfamiliar with this classical style. Gauging the moment, MS slipped into a devotional mood. Her Meera Bhajans soon had people smiling and swaying to the lilting rhythm and  soulful rendering. MS left to thunderous applause, a tribute to her mystical music and her extraordinary presence.

Later, when we were in Chennai, MS invited us to breakfast at her home. She received us in a large room. Paintings of the Karnatak Trinity of Saint Thyagaraja, Muthuswamy Dikshitar and Shyama Sastry decorated the walls. In two corners were glass cases holding beautiful tambooras. The smiling, gracious of her in this setting is our last and abiding memory of MS.