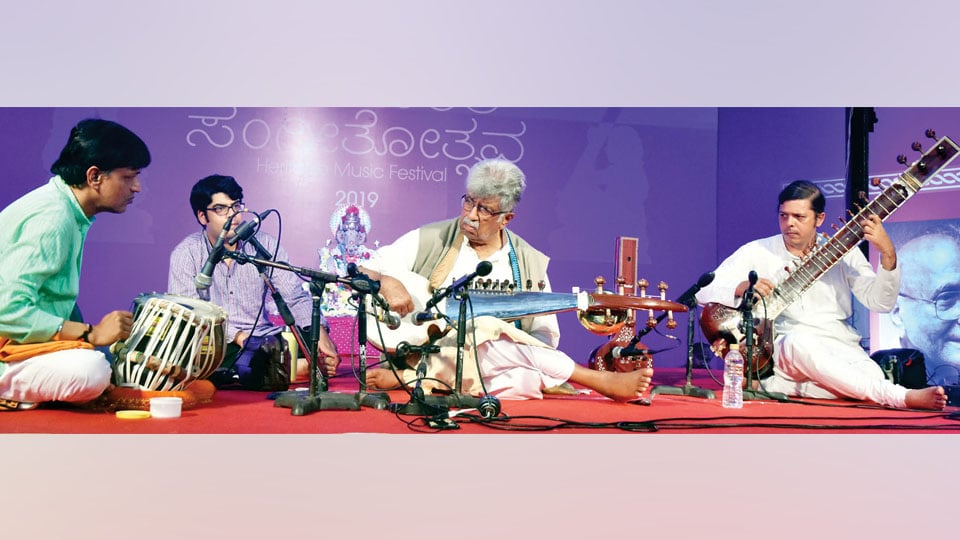 It is no joke for a musician to be performing at the age of 86. Sarod playing demands a particular posture which is not easy to manage for more than half-an-hour at the most. But this 86 years young gifted musician sits for more than two hours with his instrument with unflagging attention, oblivion of others’ presence, captivated in music.

In the present concert on Sept.6 at 8th Cross Ganeshotsava Music Festival, he was accompanied by Udayraj Karpur, whose two young boys gave an admirable tabla solo performance prior to this concert.

The opening of the concert was with Yaman. The alap was deep and resonated with the veteran master’s probing style. His recitals have a very layered multidimensional sound. He weaves a veritable tapestry of sound, combining different strokes, different speeds and different playing techniques, creating a rich experience. In spontaneity lies the very essence of Indian classical music.

The maestro then switched to Desh, which was played with great clarity and weight. In both these compositions — the first and the second, the artiste chose ‘tantrakari’ gat, which was lively. Kafi was played with dignity and depth. But towards the end of the composition, one of the strings gave way and while his pupil replaced the string, the maestro spoke to the audience. He said music is the same for all — whether it is here or in Pakistan. Music pars all boundaries and therefore music is to be enjoyed beyond all the routine that we see in the newspapers every day. The concert concluded with a piece in Sindhubhairavi. Matching his virile stroke work on the tabla was Udayraj Karpur.

On Sept.7, Bangalore Brothers — S. Ashok and M.B. Hariharan — sang with Matthur Srinidhi on violin, H.S. Sudheendra on mridanga and Phaneendra Bhaskar on ghata. Strangely, they are friends and not brothers and yet there is harmony in their music. While Hariharan has a soft voice, Ashok’s voice is bold, distinct and valorous. The brothers had chosen some familiar compositions for the evening.

‘Ganapate Mahamate’ in Kalyani by Muttuswami Deekshitar was appealing and adorned with swaras for the pallavi portion.   Hariharan’s raga development of Kannada was concise leading to Maharaja Jayachamaraja Wadiyar’s ‘Sri Chamundeshwari Devi’, which also saw vibrant and effervescent swaras to the madhyama Kala Sahitya ‘Vara Kannada Raga Santosha’. While Makelara Vicharamu’ was a filler, Bhairavi was handled in detail by Ashok, followed by the presentation of Tyagaraja’s  enchanting ‘Upacharamu’ set to Adi Tala. A blissful RTP in Aarabhi devoted to Lord Ganesha — ‘Vighneshwaram Vinayakam Umasutam Sada Bhajami Guha Sodaram’ set to Khanda Triputa Tala supplemented by ragamalika swaras in Hamsadhwani, Brindavani, Vasanti, Behag and Kanada was the main piece of the evening. After a high-spirited taniyavartanam by Sudheendra and Phaneendra Bhaskar, tukkadas followed which included one of the 39 dancing nottuswaras of Muttuswami Deekshitar for which the brothers have become popular — ‘Jagadeesha Guruguha Hari Vidhi Vinutam.’ These nottuswaras though very short, can enhance the mood of the listener instantly. They are notable as an interaction between the East and the West during Company Rule, being based on Western sources, mostly simple melodies inspired by Scots and Irish tunes. They are all composed with Sanskrit lyrics in the Western C Major scale, whose pitch intervals correspond to that of our Shankarabharana.