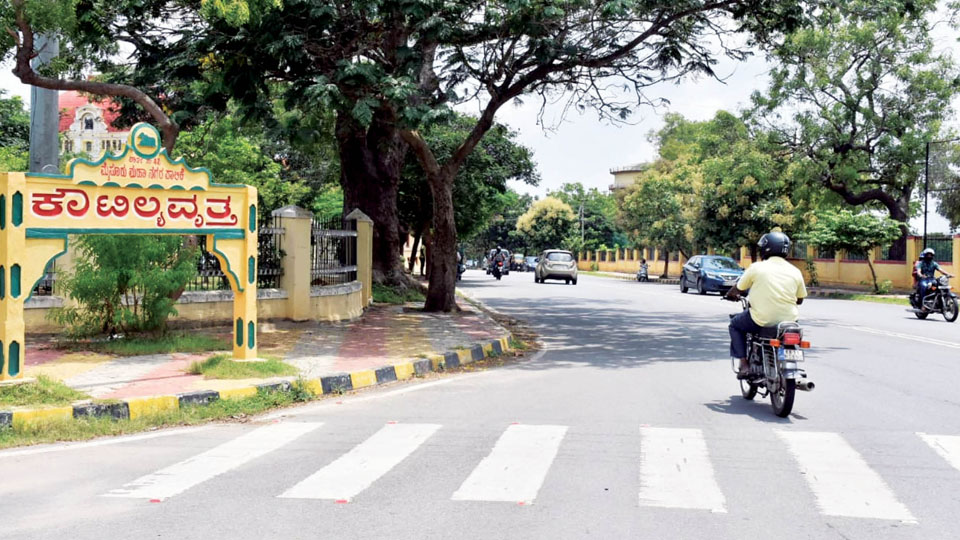 Mysore/Mysuru: In a bid to create infrastructure for cyclists to promote eco-friendly, healthy and cheap means of travel, the Mysuru City Corporation (MCC) has come up with a project to create dedicated cycle pathways and has identified 11-km route in the heart of the city. The pilot project has been prepared in consultation with the city Traffic Police.

The lane will be laid on one side of the road and a 1.5-metre space will be earmarked as the dedicated cycle lane. The Engineering Division of the MCC is working on how the lane should be demarcated — to use bright paint, or to barricade or put fibre or rubber railings.

On weekends, it is common to see flocks of cyclists in colourful clothes pedalling through the roads. Of late, Mysuru has seen a large influx of young and old residents looking to improve their fitness and moving towards sustainable means of transport. People working in multinational companies too have begun cycling to work too. However, the lack of a cycle track within the city leaves them jostling with two-wheelers and auto drivers who barely provide space for them.

As part of the pilot project, the MCC wrote to city Traffic Police inviting suggestions and ideas for the dedicated cycle lane.

Traffic ACP S.N. Sandesh Kumar has submitted the report along with routes, modalities, traffic density and other aspects. The pilot project will now be placed before the next MCC Council meeting for approval and implementation, sources said.

There is a dedicated bicycle lane on Narasimharaja Boule-vard near Administrative Training Institute that is used by cyclists. The lane is also used by horse trainers to walk their animals.

The project of dedicated cycle lanes was mooted in 2012 where it was decided that three to five feet of roads would be dedicated exclusively for cyclists and the lane would be painted yellow. Some roads including a part of JLB Road, Sayyaji Rao Road and Mysuru–Bengaluru Road were picked for the project. Krishnaraja Boulevard too was identified as an ideal place for lanes.

‘Trin Trin,’ the Public Bicycle Sharing (PBS) system of Mysuru completed three years on June 4 this year. ‘Trin Trin’ was launched on June 4, 2017 by the then Chief Minister Siddharamaiah. The system was established by Mysuru City Corporation (MCC) in association with the Directorate of Urban Land Transport (DULT). City-based ‘Green Wheel Ride’ has got the tender of managing the PBS system.