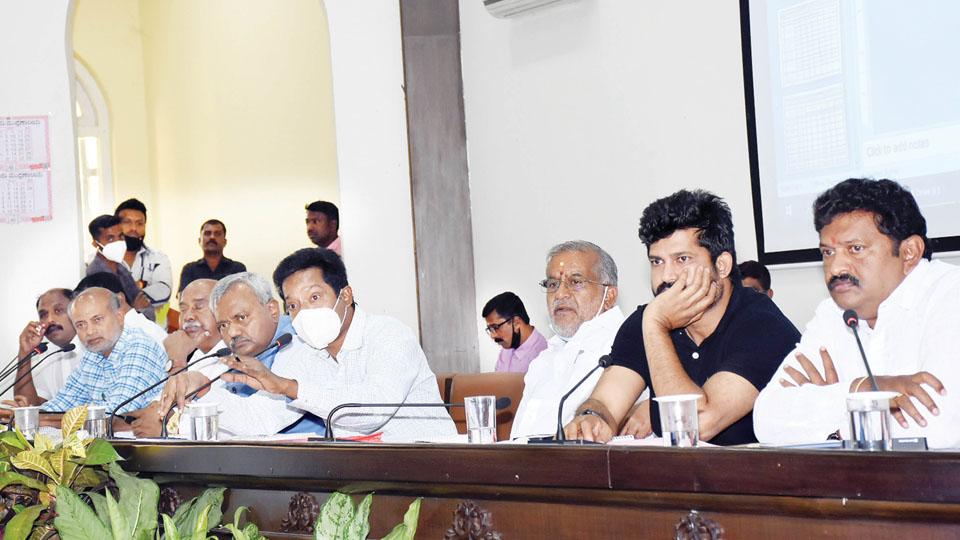 120 MUDA Layouts to be handed over to MCC

Process to be completed in a month, assures MUDA Commissioner

Mysore/Mysuru: The process of handing over Layouts formed and approved by Mysuru Urban Development Authority (MUDA) to the Mysuru City Corporation (MCC) for upkeep and maintenance has begun and it will be completed within a month, said MUDA Commissioner Dr. D.B. Natesh. Once the Layouts are taken over by the MCC, it will provide civic amenities.

The issue came up for discussion at the District-level Progressive Meeting held under the chairmanship of District Minister S.T. Somashekar at ZP Hall yesterday where Chamundeshwari MLA G.T. Devegowda raised the issue of civic amenities to these Layouts. He was joined by K.R. Nagar MLA S.R. Mahesh.

Both the MLAs said that many residential areas developed by the MUDA did not have streetlights. They attributed this to non-payment of power charges to Chamundeshwari Electricity Supply Corporation (CESC).

Responding to the issue, MUDA Commissioner Dr. Natesh said that over 120 Layouts have been identified by MUDA to be transferred to the MCC and the process has already begun and formalities will be completed within a month.

During the review of the progress achieved in the Jal  Jeevan Mission to provide drinking water to rural areas, the authorities said that over 1,07,029 houses will have metered connection by the end of March. As on today, there are nearly 2,65,595 metered connections, the meeting was told.

When the progress review of CESC was taken up, G.T. Devegowda, S.R. Mahesh and K. Mahadev questioned the officials on continuous disruption of power supply to irrigation pumpsets. Such a move antagonises the farmers and the elected representatives have to bear the brunt of farmers’ anger.

Asking the CESC officials to set right all anomalies in the supply of power to pumpsets, the MLA warned them that they will be forced to stage dharnas in front of CESC offices if uninterrupted power supply is not ensured.

Forest laws have not fallen from sky: MLA S.R. Mahesh

Taking Forest Department to task, MLA Mahesh questioned as to who granted permission to close the outlets of Lingambudhi Lake as this action has resulted in flooding of many low-lying areas around the Lake.

The MLA complained that his own land was submerged and over 300 trees including sandalwood trees have been destroyed as the Lake has overflowed due to excessive rainfall. He directed the Forest Department not to close the outlets.

Responding to his charges, Deputy Conservator of Forests Kamala Karikalan said that as per the Forest Act 1980, no work can be undertaken in the Lake premises and there is an urgent need to save water in the Lingambudhi Lake that supports a rich biodiversity and also flora and fauna are dependent on the ecosystem.

No development activity will be permitted in the Lake and the MCC and MUDA can take up such works beyond the Lake boundaries as per law and the same has been conveyed to the MUDA and MCC Commissioners, she clarified.

A visibly irritated MLA Mahesh shot back saying who will bear the loss if trees and estates are damaged due to stagnation of water. “Will the Department reimburse the loss sustained by the property owners as the Lake bund has breached. The forest laws have not fallen from the sky,” the MLA said.