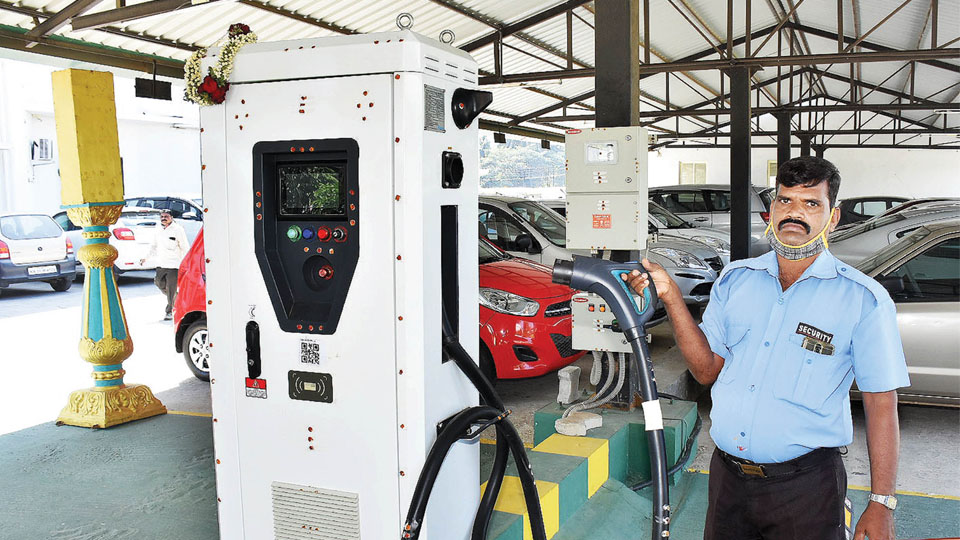 Among them, 10 charging stations will come up on Mysuru-Bengaluru 10-lane Economic Corridor from Maddur to Mysuru where CESC has its jurisdiction.

In February this year, CESC had successfully launched its first EV charging station of the Mysuru region, Kurrent, at its corporate office premises in Vijayanagar. Now, a proposal has been sent to the Government to set up 150 charging stations in five districts — Mysuru, Chamarajanagar, Mandya, Hassan and Kodagu.

Confirming this to Star of Mysore, CESC Managing Director Jayavibhavaswamy said that the number of charging stations have been divided across five districts based on the business potential, town and city areas, economy and also buying capacity, he said.

Ten EV charging stations will be set up from Maddur to Mysuru on the 10-lane Mysuru-Bengaluru Economic Corridor and a requisition has already been sent to National Highways Authority of India  (NHAI) that is building the Corridor. “We have asked the NHAI to identify places including toll plazas, rest areas and restaurants along the Corridor where vehicles stop and at the same time they can have a break till the vehicle is fully charged,” he explained.

The NHAI is already planning to set up several EV charging stations that will help in boosting electric vehicle infrastructure in India. The plan is part of real estate development along the national highways. According to sources, the NHAI has identified more than 650 properties across 22 States with a combined area of over 3,000 hectares to develop highway infrastructure.

Under the Faster Adoption and Manufacturing of (Hybrid &) Electric Vehicles in India (FAME India) Scheme Phase II, 184 EV charging stations have been proposed on 9 expressways including the Mysuru-Bengaluru Corridor. No such stations are proposed on any other highways of the State.

The EV charging stations that CESC has proposed would be set up in Public-Private-Partnership (PPP) model and CESC will not incur any costs. “The NHAI will allot the land and the private party that applies for the tender or the supply contact will charge the vehicles and maintain the charging units. Only power will be supplied by CESC and the power prices will be charged at the prevailing rates per unit,”  Jayavibhavaswamy added.

“Apart from the Mysuru-Bengaluru Corridor, we have identified places in the five districts like Government offices, within the city and town limits where EV charging stations can come up. If the Government accepts our proposal, tenders might be called with BESCOM (Bengaluru Electricity Supply Company) being the central tendering agency,” he revealed.