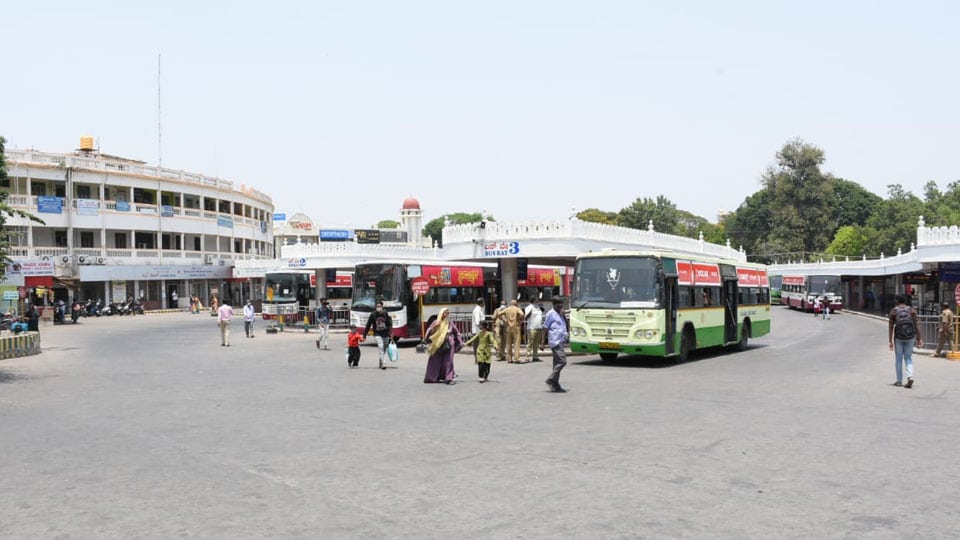 Mysore/Mysuru: Even as the indefinite strike by  employees of the four State-run Transport Corporations — KSRTC, BMTC, NEKRTC and NWKRTC — seeking fulfillment of their nine-point charter of demands, which chiefly included payment of salary as per the Sixth Pay Commission, entered the fourth day today, the city witnessed operation of a total of 40 KSRTC buses since morning.

Also, private buses, mini buses, maxi cabs and other public transport vehicles  which have been granted temporary  permission to operate on specific routes, too operated from the Sub-Urban Bus Stand picking up passengers, as they are doing since the indefinite strike was launched on Apr.7.

Meanwhile, despite the agitating staff in no mood to relent, the KSRTC authorities have continued with their efforts to convince them to return to work. The KSRTC is suffering a revenue loss of about Rs.1 crore a day, with Rural Division accounting for Rs.60 lakh and City Division Rs.40 lakh, it is learnt.

Trainee staff, who were issued call notice, fail  to report for work

With the agitating staff in no mood to relent even three days after the start of the indefinite strike, KSRTC Mysuru Rural Division had issued a final call notice to 98 striking trainee workers (comprising Driver-cum-Conductor, Driver, Technical Assistant and Skilled workers) asking them to report for duty on Apr.9, along with a written explanation for their absence from duty. But none of them reported for duty till noon today.

The trainee workers said that they will not be deterred by call notices, warnings or other forms of threat. They said there was no question of reporting for duty until their demands were met as assured by the Government in December last when KSRTC staff undertook a similar strike.

Meanwhile, KSRTC authorities, confirming that none of the trainees who were issued final call notice had reported for duty, said that they have been set a fresh deadline till today evening. However, all trainees, who fail to report to work before the deadline, will be sacked, they said.